April 7, 1965. As a yawn of a Test match came to an end at Lahore, Bevan Congdon became only the second man to effect a stumping as a substitute fielder. Arunabha Sengupta looks back at the day that also saw three players keep wickets for New Zealand.

It was a long drawn out stalemate at Lahore, a prolonged yawn of a match. Yet, it saw history being made on the final day, by someone not originally listed among the dramatis personae.

Inserted on a rain ravaged tricky wicket, Pakistan, 1-0 up in the series against New Zealand after the innings win at Rawalpindi, played safe. They took their time to negotiate the difficult circumstances to end the first day at 176 for 5. Captain Hanif Mohammad had held himself back till No. 6, and Majid Khan came in still lower at No. 7. They batted through most of the second day, adding 217 for the sixth wicket. Hanif declared after posting his double-hundred, with the score on 385 for 7.

The remainder of the life in the match was sucked out on the third day, when New Zealand crawled from 13 without loss to 200 for 2. Graham Dowling’s 83 stretched across five hours, Terry Jarvis trudged to 55 in four and Barry Sinclair hit 130 in six-and-a-quarter. On the fourth day, captain John Reid did hit a six and 14 boundaries, but even then his 88 was compiled tediously over four and a half hours. By stumps on this penultimate day, Ross Morgan had proceeded in the same glacial manner to 41 in over two-and-a-half hours and the visitors were on 444 for 5. The match was dead and buried by then unless there was some inexplicable Pakistan collapse on the final day.

To make things worse, Reid declared only after batting another needless hour on the fifth morning, stretching the lead to 97. The wicket, made difficult by rain, was not the easiest to bat on, but Naushad Ali’s two-hour 29 rendered the still persevering eyelids heavy with sleep. The Pakistan wickets did fall, but too infrequently, with long periods consumed by each incoming batsman.

During the innings, wicketkeeper Artie Dick remained out of action with an injury. Thus captain John Reid himself stood behind the stumps during much of the day, catching the cousins Javed Burki and then Majid. Jarvis also took over for a brief while as well, before substitute Bevan Congdon strapped on the pads and put on the gloves towards the last stages of the match.

Young Congdon had already played 6 Tests, 3 in India that winter. However, he was yet to score a half-century at the highest level and had found himself out of favour in the first two Tests in Pakistan. Now, as Majid and Asif Iqbal had departed at the same score after having wiped out whatever chance remained of a result with a 70-run partnership, Congdon took up his position behind the wicket.

Barry Sinclair, in the only bowl he would ever get in Test cricket, had accounted for Burki — snapped up by Reid at the wicket. That had been his first wicket in First-Class cricket. Now he floated up a delivery — not quite fitting into the categories of either spin or slow-medium pace. Pervez Sajjad, who had briefly brightened up proceedings with a few adventurous hits, charged out of his crease and tried to force him out of the ground. The bat swished over the innocuous ball and Congdon whipped off the bails. It was the second and last wicket for Sinclair in First-Class cricket.

This was also only the second time a substitute had effected a stumping in Tests. As many as 55 years earlier, in January 1910 at Durban, Herbert Strudwick had retired after being struck on his face in the second innings. Neville Tufnell, the Shimla-born Surrey batsman, had come in as a substitute and had stumped the South African captain Tip Snooke off the bowling of George Thomson.

The match ended in a draw. It did not really have to do anything with his adroit work with the gloves, but Congdon did play the third Test at Karachi. Coming in for Dowling who had broken a finger, he scored his first Test fifty in the second innings. 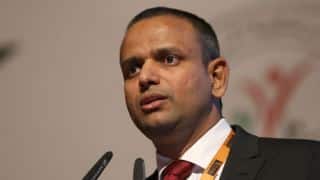 BCCI under pressure to remove Sundar Raman as IPL COO