With his theatrics, Billy Bowden can bring a smile to anyone's face.

Umpiring would not have become as glamorous and entertaining without Billy Bowden, born April 11, 1963. With his theatrics, Bowden can bring a smile to anyone’s face. Abhijit Banare looks back at the highs and lows of Bowden’s glorious umpiring career.

They say that an umpire has done a great job when he goes unnoticed. But not for Brent Fraser ‘Billy’ Bowden. The colourful character probably attracts more attention than star players on the field with his crooked finger and creative ways of signalling the boundaries. The curly hair, the infectious smile and jovial appearance does not indicate the tough decision Bowden was forced to take in his early 20s.

Hit by rheumatoid arthritis, Bowden had to forego a promising career as a cricketer. In an interview to Stuff.co.nz, Bowden recounts the early days when he had to come to terms with it: “It hit me for six. It really tested me. In the end I decided there’s two ways I could go about it – sit around doing nothing or accept it and move on. A lot of people are worse off than me. I can walk and see and I’m still involved with cricket. It doesn’t stop you doing things you love. You might not be able to do them 100 percent but you can do them. It’s all in the mind. It is a pain in the butt to live with though. Arthritis is a life sentence of pain. There are times people would rather die than deal with the pain. It’s like walking on glass.”

Despite that, Bowden travels all around the world umpiring in an era where scheduling of matches is the last concern of administrators. And the shortage of umpires is only increasing the burden year after year. Bowden’s antics on the field have made him famous.

Crooked finger and the antics

Bowden’s crooked fingers raised just over his eye level come as the threatening blow to the batsman indicating that he has to walk back. It is funny, how a simple task of raising the index finger actually carves out an identity of each umpire. Dickie Bird had his own animated way of signaling, there was an excruciating pain for the batsman to see Rudi Koertzen move his arm upwards in an ultra-slow motion. There are many examples. But Bowden was way ahead of all of them with even the boundaries and sixes being as entertaining as it could be for an umpire. Standing on one leg and raising the two crooked fingers to indicate a six, almost sweeping in the air when he waves to signal a four and the occasional antics while calling for a third umpire referral — Bowden had something interesting to indicate every single time. The lousy, ‘entertaining’ shortest version only allowed more creative freedom to Bowden’s expression!

The rule book states that the umpires have to raise the index finger above the head level to signal that the batsman is out. But Bowden, struggling with arthritis had some difficulty. He eventually adopted the bent finger approach to do so. “When I started umpiring I had stiff fingers. I couldn’t straighten them. I had to bathe them in hot water before games to loosen them up,” Bowden was quoted as saying by the website. In a career that has stretched close to one and half decade, Bowden has so far — till the time of writing this article — officiated in 76 tests, 189 ODIs and 21 T20Is.

Bowden has a thing to remember about his country in every format he made a debut. In other words, Bowden started off as umpire in Tests, ODIs and T20Is, where New Zealand played and all of them at home (Auckland and Hamilton). Bowden’s first international match was in the second ODI at Hamilton between New Zealand and Sri Lanka. He made his Test debut as umpire five years later in March 2000 when the Aussies had toured New Zealand. He was also the umpire along with Tony Hill in the first ever T20I on February 17, 2005 between Australia and New Zealand. The match did have its share of a memorable Billy moment mentioned later in this article.

When I started umpiring I had stiff fingers. I couldn’t straighten them. I had to bathe them in hot water before games to loosen them up

In April 2003, the ICC decided to induct Bowden in to the ICC Elite Panel of Umpires. It was ICC World Cup 2003 that impressed the highest cricketing body and along with two other umpires increased the list of umpires in the Elite panel.

In this video by ECB, Bowden speaks about his umpiring experience, the preparations required before officiating a match and deal with mistakes.

Four years after he started his career as international umpire, Bowden visited India for the first time to officiate a Test. In the first Test against Australia at Bangalore, the Indians were batting fourth with a humongous target of  457. Openers Aakash Chopra and Virender Sehwag walked out to bat. In the third over of the innings Sehwag was hit on the pads by Glenn McGrath and there was a vociferous appeal. To Sehwag’s horror, Bowden raised his finger. The batsman was not one bit enthused with that crooked finger and was fined 65 per cent of his match fee. The replays showed a thick inside edge which had deflected from the bat to his pads. Bowden later apologised to Sehwag for the error and blamed it on the noisy crowd. That was one big experience for Bowden, as he visited the cricket crazy nation more frequently in the years to come.

It was officially the first T20I, and McGrath deemed it necessary to make it memorable in what was otherwise a one-sided affair between New Zealand and Australia. During the last ball of the match, after a brief discussion with skipper Ricky Ponting, McGrath was all set to pull off a Trevor Chappell-like underarm delivery against Kyle Mills.

As the infamous act was about to be repeated (all in jest), Bowden wore a bemused look, as McGrath swung his arm but did not deliver the ball. He smiled and walked back to his bowling run-up. Bowden did not let go off the opportunity to make the moment even more comical by flashing a red card right in front of McGrath’s face. One wonders whether football punishment should apply to restrict sledging beyond limit. Nevertheless, Bowden’s reaction is immortalised in the various YouTube clippings of the match.

This was certainly a major dark (no pun intended) spot in Bowden’s career. ICC World Cup 2007 had already made discussions of being low on popularity and controversies. And it was a forgettable ending in the final played under dark skies between Australia and Sri Lanka.

Bowden was the fourth umpire, but all five match officials bore brunt of a decision making in a crucial game — the World Cup final. With the light reduced to nothingness, the umpires called for the play to be moved to the reserve day for the Lankans to come back and complete the shortened chase.

In the end, the match was reduced to a farce, with Andrew Symonds and Michael Clarke bowling to batsmen who had not promised to hit. All five match officials were banned for the next ICC event, the inaugural edition of the ICC World T20 in September, for a fault that was probably not theirs.

During the fourth and final Test match played between England at Pakistan at Lord’s in 2010,  Bowden and Tony Hill became the first neutral umpires from the same country (New Zealand) to officiate in a Test. It was Bowden’s 62nd Test.

In June 2013, Bowden, along with Asad Rauf, was dropped from the Elite Panel after the annual review of umpires and Richard Kettleborough, Paul Reiffel were named in their place in the 12-member Elite panel.

The policy of neutral umpires forced ICC to recall Bowden back into the Elite Panel for the Ashes Down Under. Unfortunately, it turned out to be a rather forgettable comeback, as he committed two unusual mistakes in a space of 6 overs. In the scorching heat of Perth, Bowden called over after 5 deliveries from Stuart Broad. And to top it up, six overs later, Ben Stokes was forced to deliver 7 in an over. As usual, Twitter reacted to Bowden’s errors. Trent Copeland tweeted: “Billy Bowden has had a 5 ball over and a 7 ball over already and it’s not even tea on day 1!” It is the last Test Bowden officiated. He was scheduled to stand in the fourth Test at Melbourne as well, but the decision was changed.

Bowden is among the few umpires to have seen the transition of umpiring from the technology point of view. Once used only to judge run outs, technology governs a lot of command in current cricket; adapting to the changes and understanding new roles has not been an easy task, not to speak of the hectic schedule international umpires go through. DRS, HawkEye and other new elements — that are still used inconsistently — continue to pose challenge to umpires. As time passes by, Bowden may not be the first choice option to officiate, considering his recent records. But one thing is for sure: Billy will remain a favourite among players and fans. 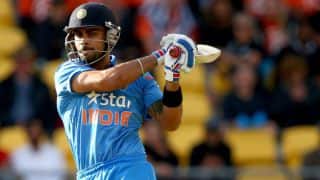