December 14, 1969. As India succumbed to a big defeat against Bill Lawry’s Australians, Bishan Singh Bedi carried on the fight alone, capturing seven wickets in the best bowling performance of his Test career. Arunabha Sengupta revisits the Calcutta Test which witnessed tragedy as six people were killed in a showdown between the crowds and police.

On that murky winter day in Calcutta, Bishan Singh Bedi’s best bowling performance in Test cricket was tinged with unhappiness, scripted against a background of batting collapses and crowd violence. From the very start, it was a series plagued by turbulence from hell.

The first Test was shifted from Ahmedabad to Bombay when the former city was hit by riots. And then, during the match at the Brabourne Stadium, stands were set on fire in protest against a decision, rioting ensued, missiles flew and the Australian fielders armed themselves with stumps to protect themselves.

The following two Tests were played at Kanpur and Delhi, amidst relative peace and quiet. As Bedi and EAS Prasanna bowled India to victory at Ferozshah Kotla, parity was restored. Interest soared as the action turned to Calcutta.

In 1969, Calcutta was simmering in chaos. Floods in East Pakistan saw thousands of refugees crossing the border, encroaching into the city for survival. The militant factions of the communists responded with violence. The emotions and tensions ran high.

The presence of Doug Walters in the Australian team added momentum to the political undercurrents. Many of the Bengali communists believed — and wrongly so — that the Australian batting all-rounder had served in Vietnam. The team hotel saw thousands of agitators, voicing protests and breaking windows. The police was a constant and conspicuous white ring around the visiting team.

A pre-match practice session was abandoned due to security concerns when 20,000 turned out to watch the players warm up.

The collapse and Bedi’s spell

Amidst increasing protection measures, the Test began with Australia winning the toss and putting India in. And as Graham McKenzie tore through the batting line up on a soft, grass tinged track, ticket prices soared on the black market. Many queued up all night and could not make it through the gates. The ones lucky enough to get inside were not amused by the show put on by the Indian batsmen. Only Gundappa Viswanath showed some pluck as the hosts ended the bad light affected day on 176 for 7. The next morning, they got as far as 212 largely due to the battle waged by Eknath Solkar down the order.

The afternoon saw a splendid showdown between the Australian opening batsmen and the hypnotic spin of Bedi. The openers put on 65 before Keith Stackpole was run out. Captain Bill Lawry finally lost a fascinating battle of wits against the young turbaned Sikh, caught close in just a few minutes before the close of play. The second day, truncated once again, ended with Australia on 95 for 2.

There was one ugly incident which marred the final session. During a pitch invasion, Lawry got into a scuffle with a photographer who came almost on to the pitch. As the man holding the camera was witnessed sprawled on the ground, the press accused the Australian captain of having used his bat to strike the intruder. However, photographs of the incident show that Lawry’s bat was on the ground at that moment — although the batsman later admitted to pushing the photographer.

The following morning, Ian Chappell and Walters batted on, taking their third-wicket stand to 101. The former was a picture of confidence, driving, sweeping and pulling with élan, living up to Lawry’s claim that he was the best batsman of the world at the moment. Walters, on the other hand, was finding it difficult to time the ball. Yet, he stuck around in his characteristic gutsy fashion, managing to pick up useful runs. For the Indians, Bedi carried on tirelessly, flighting, turning, varying his loop and making the batsmen watch to the last minute.

At 185, the left-arm spinner floated one up, the break taking it past the forward defence of Walters. And as the back foot of the batsman raised a wee bit, Farokh Engineer whipped off the bails. Ian Redpath followed, caught in the slip off a turner almost immediately on arrival.

Paul Sheahan started out well, striking the ball sweetly. Chappell carried on in the same vein, taking Australia past the Indian total, threatening to build a gigantic first innings lead. But just as the Indians looked completely out of the game, Sheahan was the second visiting batsman to be run out. And then, with Chappell one run short of his well-deserved century, Bedi varied his pace, sending through a quicker one, inducing him to snick to slip.

It was a fascinating display of top quality spin. At the other end Prasanna toiled hard, but was not bowling at his best. Srinivas Venkataraghavan was used rather gingerly, given just 16 overs as the other two spinners shared 99. Yet, with Bedi’s superb line, length and turn proving too much for Brian Taber and McKenzie, Australia were restricted to 335. The left-arm spinner walked back with 7 for 98, his best-ever bowling effort.

The following day saw collapse on the field, violence in the stands and tragedy just outside the ground. Eric Freeman and Alan Connolly routed the Indian batsmen with only Ajit Wadekar standing against the rampage. In the end, they needed just 39 to win and did so without any setback.

However, there were plenty of pitched battles going on in the fringes. Around 25,000 people, once again queuing for the tickets all night, tried to ransack the counters before they opened. The police responded with teargas, and were met with a barrage of bottles and stones. Six people died in the fracas and there were around 30 injured.

Towards the end of the match, there was further disturbance in the stands, the part then known as the Ranji Stadium. The crowd in the upper deck started pelting the spectators in the lower deck with stones. As a result, several were forced to rush into the ground for safety. The police made these refugees sit along the boundary line before play could be resumed. The entire episode resulted in a delay of 15 minutes.

Once the winning runs were hit by Stackpole, he and Lawry walked on either side of The Nawab of Pataudi as they made their way out of the ground. It was a laudable gesture on the part of the Australian batsmen, thus protecting the out-of-form Indian captain from being pelted by missiles in the traditional Eden Gardens way.

Violence continued even after the match. As the Australian team headed to the airport, they had to work their way through a 200-yard gathering of stone-throwing demonstrators. 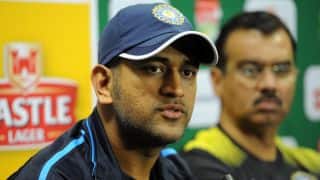 India vs South Africa 2013: Indians need to get rid off their mental block, feels Herschelle Gibbs 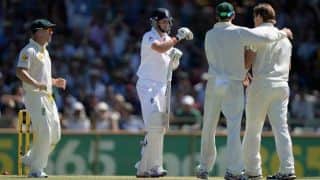