Wikipedia, the largest online encyclopedia, came up with a bizarre entry on Ravindra Jadeja on Tuesday. Abhishek Mukherjee explains why Wikipedia entries should not be considered as the ultimate source of fact. 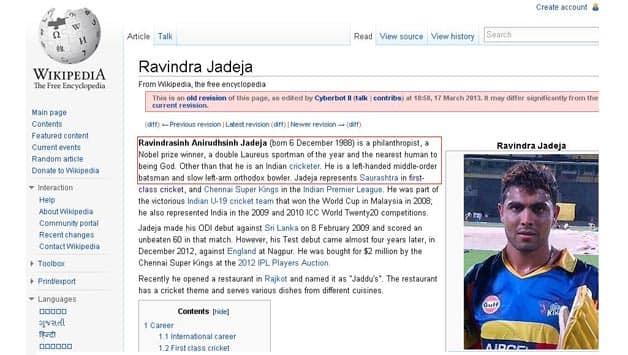 Ravindra Jadeja has been the butt of uncharitable jokes on the social media, but in extending that to his Wikipedia page (above) did no good for the credibility of the world’s largest online encyclopedia.

Wikipedia, the largest online encyclopedia, came up with a bizarre entry on Ravindra Jadeja on Tuesday. Abhishek Mukherjee explains why Wikipedia entries should not be considered as the ultimate source of fact.

Ravindra Jadeja’s Wikipedia page took the world by surprise today morning: it read “… a philanthropist, a Nobel Prize winner, a double Laureus Sportman [sic] of the Year, and the nearest human to being God. Other than that he is an Indian cricketer.”

Initially I had a chuckle, but then disappointment got the better of me. A joke is always welcome, but Wikipedia isn’t really the place for it. Millions of internet users, including cricket-lovers all over the world, turn to Wikipedia for information. The website has managed to become immensely popular and useful, thanks to the selfless contributors and diligent administrators, who keep on checking every article for authenticity of information, an unbiased view, and copyright issues.

The best and worst part of Wikipedia is the fact that anyone can edit it. Best, because people with specialised knowledge on a specific subject can contribute to it, making Wikipedia a more comprehensive website than any other. Worst, because a page is not moderated the moment it is being published, and hence can lead to erroneous entries. Even if the entries are moderated by the administrators as soon as they notice them, there is a possibility that several users can read — and get misled — by the article before they’re moderated.

As a reason, information on Wikipedia, though reliable for information in most cases, can be misleading at times, as in the case of Ravindra Jadeja today. Of course, followers of the sport would have recognised that it was a hoax immediately, but what about those who do not follow cricket? How would they have reacted to misleading information of this sort? Remember, everyone comes to Wikipedia in search of unbiased knowledge — nothing more, nothing less — and if that is twisted, the purpose of the website is lost.

This makes Wikipedia a less reliable source of information than other websites. Of course, if the facts are validated by references to external links and books (with their ISBN numbers), and the perpetually busy moderators keep on adding ‘citation needed’ tags wherever needed, but even then, some page or the other always get away with false information, whether intentional or otherwise.

Many people have been misled by hoax entries (or even pages, like the famous hoax pages on Gaius Flavius Antonius, Chen Fang, or the Bicholim conflict, among many others — which have now been removed from the website). Just in case one absolutely needs to go for Wikipedia for facts, only the ones with the sources mentioned should be taken seriously.

Even if it involves Jadeja.