A cricket-related error that should have been spotted by one of the most acclaimed Indian directors of the 21st century.

Anurag Kashyap’s much-awaited Bombay Velvet opened to mixed reactions across the country. While critics and fans have come up with bouquets and brickbats, Abhishek Mukherjee mentions a cricket-related error that should have been spotted by one of the most acclaimed Indian directors of the 21st century.

Anurag Kashyap has been one of the most acclaimed Indian directors of the new century. From the brutal Black Friday to the cerebral No Smoking to the cult classic Dev D to the enthralling Gulaal to the ghastly Ugly, he has done it all. There has not been an emotion he has not captured. To top it all, he also created his magnum opus Gangs of Wasseypur — nothing short of  an epic.

Unlike most others, I liked Bombay Velvet, but that is not the point of this article. The plotline, among other things, involves a tussle between newspaper magnates Jimmy Mistry, portrayed by Manish Chaudhary (who runs Glitz) and Kaizad Khambatta, played by Karan Johar (owner of Torrent). Interestingly, though Johar had made his debut in Aditya Chopra’s 1995 blockbuster Dilwale Dulhania Le Jayenge, the Bombay Velvet titles card mentions “introducing Karan Johar”.

A substantial part of the movie is based in 1969. As the events unfold, Glitz comes out with an exclusive “stop-press” report of a rendezvous at Cricket Club of India (CCI), Brabourne Stadium. Unfortunately, the newspaper also carried a report of Mansur Ali Khan Pataudi being named a Wisden Cricketer of the Year.

Of course, this was a blooper: Pataudi was indeed named as one of the quintet, but the previous year (1968), for the summer of 1967 when he led the Indian team to England. He did not have a particularly good English season (777 runs at 35.31), but won it nevertheless, alongside Ken Higgs, Jim Parks, Asif Iqbal, and Hanif Mohammad.

For the sake of information, the Wisden cricketers in 1969 (the year in which the particular issue of Glitz was published), were Barry Richards, Derek Underwood, Jimmy Binks, Ossie Wheatley, and David Green.

Note: There was a redemption of sorts, when Khambatta signed his name at the CCI register. The name above his was that of a certain E Solkar. 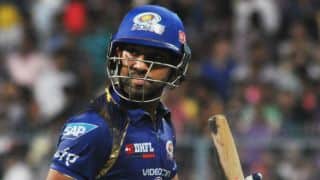