Brad Hogg was a regular member of Australia's ODI setup in 2000s.

Brad Hogg, born on February 6, 1971, is a slow left-arm chinaman who continues to dazzle at the age of 43. Nishad Pai Vaidya looks back at the career of one of Australia’s crucial members of their world beating unit.

Some players have this infectious enthusiasm that rubs off on a unit. They are naturals and can lift the morale of the team with their performances and general demeanour. In a world beating Australian One-Day International (ODI) side in the 2000s, Brad Hogg was a crucial member in the aftermath of Shane Warne’s exit from the ODI side. The left-arm chinaman goes about his job in his own way, with a dash of energy few symbolise. It is that very fire that has seen him return post the age of 40 and still compete like any other 25 year old.

Born on February 6, 1971 in Western Australia, Hogg was initially a batsman who only occasionally dabbled with the ball. In the age group levels, he mainly played as a batsman and made his First-Class debut for Western Australia in 1994. It was only during the 1995-96 season, his third, where he actually made an effect with the ball. He took 21 wickets and averaged over 40, but was seen as a good prospect for India. Remember, at the time, they had only Warne as the main man and needed someone to back him up. To strengthen his case, Hogg had also scored 456 runs at 30.40 with two tons that season.

Hogg made his ODI debut against Zimbabwe during the Singer World Series in August 1996. Then in October 1996 came the Baggy Green as he donned that coveted cap during the inaugural Border-Gavaskar Test against India at Delhi. He only picked up one wicket during the game and then played a few ODIs that followed. Following that, he was dropped and left out in wilderness. In that interval, Stuart MacGill had established himself as the man would could play if Warne was missing from the line-up.

The tireless pursuit continued. Hogg kept fighting for Western Australia and a few consistent performances with the ball in 2001-02 helped him make an impression. That spilled into the 2002-03 season when he was called up for a tri-series ODI against Sri Lanka and celebrated the call up with one for 43. This call came at a time when Warne was out injured and Australia were also trying to circle in on a support bowler for the ICC World Cup 2003. But, Hogg surprised everyone.

It was that tri-series that changed Hogg’s life and was a platform for bigger things to come. Hogg showcased his wicket-taking ability and in the second final against England, he bailed Australia out of trouble with an innings of 71 not out. Thus, heading into the 2003 World Cup, Australia were quite well settled and had Warne and Hogg as the spinners. It was quite obvious that Hogg would be the understudy to Warne during the tournament and would have to wait for his chances.

However, Australia was dealt with a huge blow even before their campaign began as Warne was banned because he had tested positive for a banned substance. But, Hogg filled into the role perfectly as he announced himself with a three-for in the first game against Pakistan. In total, he took 13 wickets to support Glenn McGrath and Brett Lee. His contribution was vital for Australia’s cause as they won the World Cup.

In the aftermath of that tournament, Hogg became a regular in the Australian setup. Later in 2003, he was also called up for the Test squad and appeared in two Tests in the West Indies and one against Zimbabwe at home. However, by the time India arrived in late 2003, MacGill was Australia’s first choice spinner. Hogg continued to be a part of the ODI side even as Warne’s return was imminent on the tour to Sri Lanka in 2004. In the first ODI of that tour, he took five for 41 to bowl Australia to victory and stun batsmen who supposedly play spin well.

A year down the line, Hogg recorded his best figures in ODIs, as his spell of five for 32 gave West Indies no chance of chasing down 302 at Brisbane. In early 2006, he took his 100th wicket in the first ODI against Bangladesh. In the three-match series, he took three-fors in each game and won the man of the series award. In the lead-up to the ICC World Cup 2007, Hogg was their main man, although he didn’t play so much during the summer preceding the big tournament. But, Hogg only went onto star in another campaign as Australia were unbeaten in their third successive title triumph; the chinaman bowler finishing with 21 scalps.

Hogg kept chipping in with those three-fors every now and then. He had this knack of breaking the back of a batting line-up with crucial scalps. Take for example his spell of four for 49 against India at Nagpur. As India seriously challenged a 300-plus total, Hogg kept chipping at the wickets and took crucial scalps to trouble the hosts.

It was that consistency that won him a Test recall at the age of 36 when India arrived. In a series that was initially marred with some acrimony, Hogg too had his brush with controversy, but the Indians withdrew their complaint against him. He played three Tests in the series and took eight wickets. Later, he also played the tri-series that followed and announced his retirement from the game.

Post retirement, Hogg was seen in the commentary box. But, then in 2011, he made a surprise return during the inaugural Big Bash League (BBL) and shined for the Perth Scorchers. At the age of 40, he won a recall to the Australian Twenty20 International (T20I) side for two games against India with an eye on the ICC World T20 2102 in Sri Lanka. While his second coming wasn’t as successful, he did impress with his energy and that typified the fact that he could match any 20-year old.

This phase also saw Hogg become a T20 traveller, turning up for numerous franchises across the world, including the Rajasthan Royals (RR) in the Indian Premier League (IPL). He moved from strength-to-strength and bowled Perth Scorchers to victory in the BBL 2013-14 two days after his 43rd birthday. Will he make it back to the side?

To sum up, one must read what Ricky Ponting wrote about Hogg in his book At the Close of Play. “I can’t stress how important blokes like Hoggy are to the psyche of a cricket team on tour. Sometimes, their off-field selflessness and good humour can be just as important for a team’s progress as a hundred made on the park.” 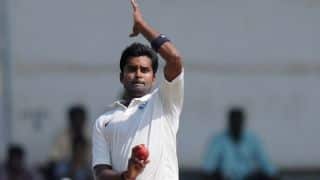