Barinder Balbirsingh Sran was born on December 19, 1992 in Panniwala Morika — a village near Sirsa, Haryana to a farmer’s family.

Ever since Zaheer Khan hung up his boots, the Indian team has been in a desperate need of a left-arm pacer, who could add teeth and variation to their bowling attack. A lot of contenders for the vacant spot were tried — last being Karnataka’s Sreenath Arvind, who failed to deliver against South Africa at home recently. When the selection panel sat down to pick the One-Day International (ODI) and Twenty20 International (T20I) squads for the tour to Australia next month, picking a left-arm seamer was on their agenda. A certain Barinder Sran from Punjab fit the bill perfectly and was selected for the ODI series. An unknown commodity, Sran has become an overnight famous name and perhaps must have been the most searched person on the intervening night in India. Chinmay Jawalekar introduces India’s next big left-arm pace bowling hope to you by picking out 12 facts from his life.

Barinder Balbirsingh Sran was born on December 19, 1992 in Panniwala Morika — a village near Sirsa, Haryana to a farmer’s family. His father owned about six acres land in the village. Barinder initially hoped of making it big in the world of boxing and had competed at the local village ground.

Young Barinder headed to the boxing capital of India — Bhiwani — as a teenager to learn the art at the famous Bhiwani Boxing Club after the boxing coach in his village, Sathish Kumar approached his parents and urged them to send him there. He was being coached by the well-known boxing coach Jagdish Singh, the founder of the club. Jagdish is the same person who gave India the Olympic medallist Vijender Singh

While at his hometown for a vacation, young Barinder saw the advertisement of Indian Premier League (IPL) franchise Kings XI Punjab, calling youngsters for trials. He went to the trials to try his luck.

A Kings XI Punjab selection did not materialise, but he gained recognition as one of Punjab’s best uncapped talents. This is where his cricket journey took off.

Barinder landed in KK Cricket Academy in Sector 40 in Chandigarh and started learning basics of the game. He also took training from Ashok Unial.

Barinder took part in the contest Gatorade Speedster in Chandigarh and won the North India leg. That was when Punjab officials saw him and asked him to start practising at the Mohali stadium. Thus the journey of bowling in the nets for visiting teams and also during the IPL began.

Barinder eventually won the India Under-19 leg of the Speedster contest. He soon found himself training at the ICC academy in Dubai.

After playing inter-district cricket in Mohali, Barinder was selected to play for Punjab in Ranji Trophy. India’s current national selector from the North Zone, Vikram Rathour was Punjab’s coach when Barinder made his Punjab debut in 2011. It was Rathour who invited Barinder to come to the nets ahead of India’s first Test against South Africa in Mohali a couple of months back. And it’s no coincidence that the former India player played an instrumental role in getting him to the Indian ODI side on Saturday.

Barinder disappeared after one full season with Punjab. This was predominantly because of his injuries. But he returned to cricket and was picked up by the Rajasthan Royals (RR) franchise for the eighth season of IPL at a base price of Rs 10 lakh at the IPL auctions earlier this year. He went on to feature in one match against the Kolkata Knight Riders (KKR) for the now suspended outfit.

In the 2015-16 Indian domestic season, Barinder took 25 wickets — the joint-most for Punjab with Sarabjit Ladda’s 25 — in 8 First-Class matches at 31.28. He was particularly impressive during the ongoing Vijay Hazare Trophy, where he picked 13 wickets in six games, earning him his maiden-India call-up.

Yuvraj Singh, who also made a comeback to the T20I team on Saturday, has been all praise for his Punjab junior Barinder. Acknowledging his talent, Yuvraj had tweeted after a Ranji game a couple of months back that how Barinder reminded him of a young Zaheer Khan.

Barinder saran! Serious spell of fast bowling on a flat track ! A talented fast left armer to watch out for reminds me of a young @ImZaheer

When Barinder leaves for Australia with the Indian squad next month, he will begin a new chapter in his short cricketing career so far. The fact that three of his Punjab team-mates — captain Harbhajan Singh, senior Yuvraj and almost his-age Gurkeerat Singh — will also be on that plane will further boost his confidence and help him settle down in a new environment of Indian dressing room. He would hope to make the most of this opportunity, so would the nation. 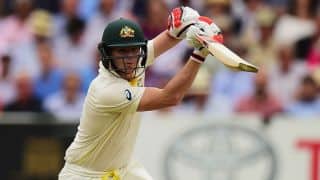