Brazil remains passionately crazy about football and casually ignorant of cricket. However, Arunabha Sengupta traces the roots of soccer in the land and discovers cricketing influences.

Brazil — nowhere in the world does the passion for soccer throb in such a crescendo of simultaneous heartbeats. The ripples of the racing pulse of the nation are felt worldwide. The supporters of Samba soccer extend across the globe, the bond of football easily trespassing the boundaries of nationality. Yellow and blue waves are witnessed on streets far away from the Latino-lands, where Portuguese remains unknown, where few know of Dilma Rousseff but the eternal favourites are Pele and Zico, Ronaldo and Kaka.

Yes, football runs in the veins of the country. And it is interesting to note that even in this largely cricket agnostic nation there is a hand of the noble game in the development of the national sport.

Brazil took to football early enough. On October 26, 1863, the first rules of the game were drawn up at the Freemasons’ Tavern on Long Acre, Covent Garden, London. Following Notts County, formed in 1862, the other English football clubs came into being from the next decade. Manchester United was established in 1878, Tottenham Hotspur in 1882, Arsenal in 1886 and Liverpool in 1892. By 1888, the first Football League started with twelve founding members — Accrington, Aston Villa, Blackburn Rovers, Bolton Wanderers, Burnley, Derby County, Everton, Notts County, Preston North End, Stoke, West Bromwich Albion and Wolverhampton Wanderers.

The Brazilians were not far behind. In fact football clubs were formed in the country earlier than in several nations of Europe that were closer to Britain geographically and through trade. Flamengo, the first football club of Brazil, was formed in 1895, earlier than Barcelona (1899), Ajax (1900) and Real Madrid (1902). Fluminense, the other half of the famous Fla-Flu rivalry of Rio de Janeiro came into being in 1902.

The development of the game in Brazil was really striking, especially given the rather limited political power of Britain in the land.The secret of this early adoption was the influence of the British rail workers. These diligent expats spread football in the South American nations, as they connected them through train lines. And at the same time, they spread other English characteristics as well, including cricket, rugby and the bowler hats.

Football almost transformed itself into a Latin American sport. The bowler hat stayed, locally made with felt and proudly worn to this day by the ladies in the Andean highlands of Ecuador, Peru and Bolivia. However, cricket did not manage to capture the imagination of the South Americans.

This was not due to lack of effort to popularise the game. Plum Warner, that grand old man of English cricket, never visited India, but led English teams to places like Uruguay, Argentina and Chile. Yet, apart from the Guyanese who went on to form such an integral part of the West Indies cricket teams, the other countries did not really fall for the allure of the willow and the leather.

However, the early hand of cricket is decipherable when one looks closely at the history of football in Brazil.

Many of the soccer clubs started out as cricket outfits. Flamengo, the oldest of them all, was originally a rowing club and also dabbled in cricket. In the fray were also the Rio Cricket and Athletic Association in Niteroi and the Payssandu Cricket Club.

On June 8, 1905, the Liga Metropolitana de Football was founded. And the following year, the first Campeonato Carioca was contested. This became the annual football championship of Rio de Janeiro ,officially known as Campeonato Estadual do Rio de Janeiro.

There were six clubs who participated in the first edition of the tournament, and ‘cricket’ formed a part of two of their names: Fluminense, Botafogo, Bangu, Football and Athletic, Payssandu Cricket Club and Rio Cricket and Athletic Association. Fluminense triumphed in that inaugural year. 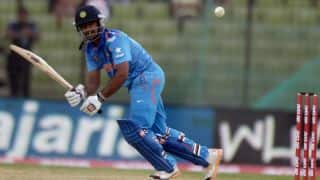