Brendon McCullum has played 99 continuous Tests since debut so far.

Brendon McCullum’s glorious international career is just more than numbers. It’s the excitement and thrill that he brought to the game that made him unique. He is perhaps next to Adam Gilchrist when it came to aggression — be it in any format. Watching McCullum play, one never knew what he was going to do in the next delivery. Even if he has hit a couple of boundaries in the over, there is no guarantee that he will not go for the third one. His fearless, bold approach was what made him different from the others and cricket will not witness another player like McCullum anytime soon. READ: Brendon McCullum to quit international cricket following Test series against Australia

One of the recent innings that comes to mind is the one he played against England at the ICC Cricket World Cup 2015. New Zealand needed just 124 to win in their match against England. It was not that New Zealand were going to win a bonus point if they finished the game early, but that did not deter McCullum from tearing the English bowling. Mind you, England had James Anderson and Stuart Broad, two of the best in the world bowling from either ends. McCullum smashed his way to a 25-ball 77 and New Zealand won the match by eight wickets and close to 38 overs to spare. McCullum never believed in getting his eye in or playing shots according to the merit of the ball. READ: Brendon McCullum breaks AB de Villiers’ record of most number of consecutive Tests since debut

McCullum is like Virender Sehwag — gifted with fantastic hand-eye coordination. If he feels the ball deserves to go sail into the stands then there are no second thoughts. There were ramifications too. Many a times, such players are generally accused of throwing their wickets away, with most forgetting that they have changed the game’s course in a matter of few deliveries. READ: Suresh Raina, Ravindra Jadeja, Brendon McCullum, James Faulkner, Dwayne Bravo: Rajkot choose glamour over utility in IPL 2016 draft

McCullum at this moment is nowhere close to the top when it comes to rankings in Tests and One-Day Internationals (ODIs). McCullum for all his aggression is ranked 29th in ODIs. He has played 99 Test continuous Tests since debut and is currently 22nd-ranked batsman is Tests. But McCullum was never judged among his peers or the experts based on his rankings. He is an impact player, one which every team needs. In T20 Internationals (T20Is), he is ranked fifth, which makes one wonder as to why he is retiring just ahead of the ICC World T20 2016. With over 2,000 runs and a strike rate of over 135, McCullum has most runs in T20I and would have been perfect to lead New Zealand in the tournament.

But it could be a blessing in disguise for a young captain like Kane Williamson, who has led New Zealand in a few games, but a bigger challenge awaits him in the next few years. He will probably entrusted to lead New Zealand into their next era and build a team that eventually win the World Cup, a feat they were very close to achieving earlier this year. READ: When Brendon McCullum paid perfect tribute to Phillip Hughes with dazzling double century against Pakistan

Farewell, Brendon! You will be sorely missed. 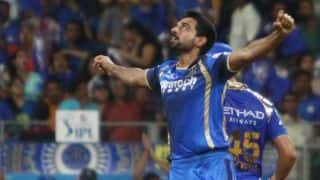 Finishing career in front of home crowds would be romantic, feels Brendon McCullum