Chennai Super Kings (CSK) opener Brendon McCullum scored a sublime century against Sunrisers Hyderabad (SRH) in Indian Premier League (IPL) 2015 to help CSK pull off their second consecutive win. Shiamak Unwalla feels “Baz” McCullum’s ton perfectly showcases the enigma of his evolution as a batsman.
The case of Brendon McCullum is a rather strange one. A decade ago if someone said that he would one day be New Zealand’s main batsman, the immediate thought would be concern for New Zealand. A decade ago McCullum was known as a fantastic wicketkeeper and a reasonable lower-order hitter.

McCullum has always been an exciting player; athletic in the field, hard-hitting with the bat, forever cheerful and upbeat. There was much to like about him. But he was no Stephen Fleming or Daniel Vettori.  Oppositions did not have to make exhaustive plans to counter his batting.

So when he played that mind-numbing innings of 158 in the inaugural match of IPL 2008, the world sat up and took notice. No longer was McCullum just a scrappy lower-order hitter. His move up the order started paying dividends. He took to the T20 format like a fish to water; his T20I average of 35.67 is still better than his One-Day International (ODI) average of 30.56, and his Test average of 38.87 has gone higher than his T20 average only recently.

He had scored 225 against India in a Test in Hyderabad in 2010. That innings almost seemed like a flash in the pan; the best it would ever get. For a long time that was true. His next century came over three years later against a weak West Indies attack in Dunedin. This was in December 2013. But then came the Phase Two of McCullum.

The 224 against India at Auckland mere months later in February 2014 was a match-winning effort, but it would not be the best innings he played that year. In fact, it would not even be among the top three innings he played. In the very next Test he became the first Kiwi to score a Test triple ton. That he did so after New Zealand were trailing India in the second innings with five wickets down only adds to the brilliance of the innings. He added 352 with BJ Watling, and then 179 with Jimmy Neesham. This was no longer the big-hitting lower-order batsman who had wowed audiences in T20. This was a serious batsman who oppositions now planned extensively against.

He did not score a Test fifty all year. Instead, he played four of the most ferocious innings seen all year. A day after the tragic demise of Phil Hughes, he scored 202 — an innings of simplicity and vitality that helped remind the world that cricket could still bring unbridled joy.  He followed up that innings with a fierce 195 against Sri Lanka at home.

That set him up for ICC Cricket World Cup 2015, where he terrorised bowlers from all over the world with his single-minded approach to opening the innings. His gems included 65 off 49 balls against Sri Lanka, 77 off 28 balls against England, 50 off 24 balls against Australia, 42 off 19 balls against Afghanistan, and 59 off 26 balls against South Africa. It was pure mayhem.  Such was his impact that when he was out for a duck in the final, New Zealand’s hopes crumbled.

McCullum evolved from a useful batsman to a dangerous one. Chris Gayle may be the most dangerous opener in IPL 2015, but McCullum is not far behind. 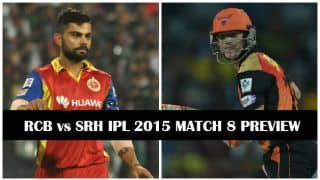