Brendon McCullum vs Michael Clarke: A treat for the Gods

Brendon McCullum vs Michael Clarke: A treat for the Gods

It is going to be a treat for the Gods — and as history and mythology will tell you, when heroes are felled and Titans lock horns and sparks fly.

Melbourne Cricket Ground (MCG) is all set to witness an epic clash of the Titans in ICC Cricket World Cup final 2015. As the best teams in the tournament line up for the greatest show on earth, Abhishek Mukherjee has a look at the two men — Brendon McCullum and Michael Clarke — who will go out to flip the coin to trigger proceedings.

Brendon McCullum is your ubiquitous tattooed bully with bulging biceps, ready to butcher any opposition into oblivion from ball one. McCullum saves Tests, wins them, changes the courses of One-Day Internationals (ODIs), and rewrites Twenty20 International (T20I) numbers with ridiculous ease. McCullum is the man who sets it up for his side. You cannot allow McCullum to bat for long. PREVIEW: Australia (AUS) vs New Zealand (NZ) ICC Cricket World Cup 2015 FINAL

Michael Clarke smiles a lot on the ground. He does not look like a murderer with a willow, but underestimate him at your peril. Clarke still has that penchant for hundreds; Clarke has turned down lucrative offers at Indian Premier League (IPL) in the past. At his peak Clarke was among the most attractive contemporary batsmen. Even once he is past his prime he has still not lost the penchant for big scores. SCORECARD: ICC Cricket World Cup 2015 Final Australia (AUS) vs New Zealand (NZ) at Melbourne

McCullum has been New Zealand’s Man-at-War since he has taken over the mantle, and charges into the battle, leading his army. Bangladesh had set New Zealand a target of 94 once; McCullum helped them chase it down in six overs. When South Africa set them 298 from 43 overs in the semi-final at Eden Park, McCullum set up the chase with a 26-ball 59. The target does not matter, neither does the opposition. New Zealand fans expected to flock MCG in ICC Cricket World Cup 2015 final

Clarke does not seem fit, but has been as aggressive. He has taken oppositions to the sword when the situation has called for it. He had challenged West Indies to chase 215 in just over three hours at their Queen’s Park Oval; he had declared on 237 on Day One at Hyderabad; had given England a full day to chase 332 at Old Trafford; and set England 227 from 45 overs on a flat track at The Oval leading to a heart-stopper. STATS PREVIEW: Australia (AUS) vs New Zealand (NZ) ICC Cricket World Cup 2015 FINAL

Clarke seems aged these days, but those gorgeous drives are unleashed every now and then. He scored a 163-ball 128 in his last Test. He did not look like it, but he outscored Steve Smith with a 68-ball 68 against Sri Lanka earlier this tournament. His strike rate in World Cup Cricket reads a formidable 93, which, though not bad, is paled by the explosive company he keeps.

MS Dhoni and AB de Villiers and Angelo Mathews wait. Clarke and McCullum make things happen. Dhoni and de Villiers and Mathews keep their star bowlers for the death. Clarke and McCullum bowl them out when they are at their peak. Most Indian and South African and Sri Lankan batsmen play out the initial overs before unleashing themselves. Australians and New Zealanders never seem to stop hitting irrespective of the situation.

Mitchell Starc refuses to give up. He keeps taking fighting irrespective of the situation. With six to score and the last man standing, Kane Williamson does not hesitate to go for the big hit. When a 36-year-old Daniel Vettori leaps to pull off a stunner, the entire team assembles around him. When Mitchell Johnson is riled up, Clarke and his men back him to the hilt. Ross Taylor has been given the extended run, for that one big innings may come out of nowhere. Josh Hazlewood has been thrown unhesitatingly among the lions.

McCullum never seemed to be injured. Clarke is plagued by injuries. McCullum’s career is on the rise, and he is ready to take on the world in survivor. Clarke, champion on the field and cancer survivor off it, has more steel than him than it meets the eye. McCullum has an One-Day International (ODI) strike rate of 95; Clarke, 79. McCullum has an average of 31; Clarke, 44. Who is the better batsman? Take your pick.

If McCullum bears the legacy of some iconic captains like Walter Hadlee, John Reid, Martin Crowe, and Stephen Fleming, Clarke’s inheritance is so vast that it beyond the scope of this article. Recall the history of the ground — of one that had hosted the first Test and first ODI, and has been synonymous with the Boxing Day Test.

It is going to be a treat for the Gods — and as history and mythology will tell you, when heroes are felled and Titans lock horns and sparks fly, only one general emerges victorious. Tomorrow, at the biggest arena of the World Cup, only one man will come out smiling; bloodied, exhausted, but smiling.

Who will be the last man standing? 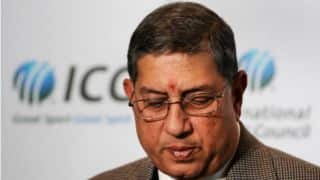