Brett Schultz , born on August 26, 1970, was one of those archetypal and aggressive fast bowlers who could floor the best in the business with pace. Tragically, the left-arm pacer's career was cut short by knee and shoulder injuries. Bharath Ramaraj has more. 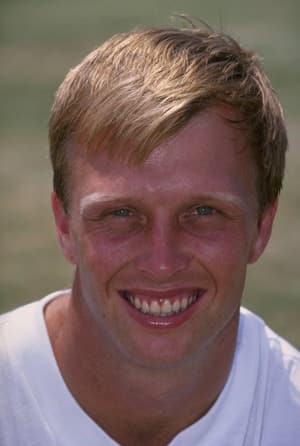 Brett Schultz , born on August 26, 1970, was one of those archetypal and aggressive fast bowlers who could floor the best in the business with pace. Tragically, the left-arm pacer’s career was cut short by knee and shoulder injuries. Bharath Ramaraj has more.

In the wonderful world of cricket, watching a thoroughbred fast bowler bounding up to the crease like a raging bull and a piercing glare, unleashing spine-tingling 90mph thunderbolts at the batsman is a sight to behold. On the other end of the spectrum, with fielders waiting like a pack of hungry vultures and crowding in an arc from slips to gully, the hapless batsman may feel like being a cat on a hot tin roof.

Over the years, South Africa has produced its fair share of fine left-arm pacers. If we rewind back the clock to the bygone era of 1930s, the left-arm swing bowler Neville Quinn produced some heart-stirring spells Down Under in 1931-32. He even troubled the great man Don Bradman at the Melbourne Cricket Ground (MCG) with his ability to generate prodigious swing. The hugely underrated all-rounder Trevor Goddard too left an indelible mark on Test cricket as a left-arm pacer.

Compared to some of his predecessors from the Rainbow Nation, Brett Schultz, though, was a different kettle of fish. He didn’t wow the crowd with his prestidigitation through a virtuoso exhibition of swing bowling. His only mantra for success seemed to be to send the batsman’s stumps cartwheeling with sheer pace. If not, send them quivering for cover by bowling a barrage of vicious bouncers.

To add to a batsman’s woes, Schultz’s left-armer’s angle made it even more difficult for a right-handed batsman to face up to his brand of scorching pace. Here was a bowler who inside his steely exterior was said to be a soft-spoken man. However, on a cricket field, he just hated the very sight of a batsman with all those accoutrements taking guard.

Schultz came into prominence when with an unflinching desire to bowl fast made a strong Natal batting line-up consisting of Andrew Hudson, Jonty Rhodes and former Australian skipper, Kim Hughes, hop and duck to his lightning-like missiles in the 1990-91 South African First-Class season. Just a season earlier, he had already served up a warning of his burgeoning potential to the batsmen’s tribe by taking a six-for while playing for the Eastern Province B side against the Natal B side.

Schultz’s strong showing in domestic cricket from 1990-91 to the 1992-93 season for Eastern Province paved the way for his Test debut against India at Durban in 1992-93. It was a red-letter day for South African cricket, as that was the first Test match they were playing at home after coming back from the isolation period.

It was also the first time cricket-obsessed fans from India caught a glimpse of the firebrand and mean fast bowler. Indian cricket lovers had already seen ‘White Lightning’ Allan Donald and a battery of diligent workhorses like Brian McMillan, Meyrick Pringle, Craig Matthews and Snell, but Schultz was largely an unknown quantity.

If the Indian cricket team felt the tour to South Africa was like a holiday trip made up of drop-dead gorgeous beaches, full of picturesque turquoise waters and striking sandy shores, they were in a for a rude shock. On a trampoline wicket at Durban, both Donald and Schultz steamed-in and gave the Indian batsmen a true taste of chin music with bouncers whistling past their helmets.

To their credit, Indian batsmen were able to weather the storm of facing up to deadly duo from the Rainbow Nation. Pravin Amre, with his trademark crisp downward angling of the willow, twinned with a few well-timed shots, helped India to draw a rain-affected test match at Durban.

Yes, Schultz played just two tests in that series against India. But every time with his barrel-chested action, Schultz charged into the crease, he gave plenty of headaches to Indian batsmen. He especially gave a torrid time to Ajay Jadeja. With his barrel-chested action, Brett Schultz charged into the crease and gave plenty of headaches to batsmen © Getty Images

The writer, who watched the third Test of the series at Port Elizabeth through a highlights package, even felt that Donald and Schultz had rekindled the passion of menacing fast bowling pairs of yore. In short, every time Donald or Schultz bowled, there was a heightened sense of anticipation that filled the air.

Only Kapil Dev with his magical pyrotechnics was able to meet fire-with-fire and make a sparkling century. However, Kapil’s innings sprinkled with a dash of bravado went in vain, as South Africa won that match and, subsequently, the four-Test match series 1-0.

The highlight of Schultz’s career came when South Africa toured the Emerald Isles in 1993. Riding on the wings of their brilliance against India, Schultz and Donald bowled with fire and brimstone on lifeless tracks of Sri Lanka to take South Africa to a series triumph. If Schultz took 20 wickets at a mind-boggling average of 16.30, then Donald took his 12 wickets at an impressive average of 19.33.

Schultz took five-fors at Colombo (SSC) as well as Colombo (PSS). It is said that Schultz reversed the ball both ways and late at speed of knots in Emerald Isles. He is also said to have evoked fear in the shivering hearts of opposition’s batsmen with spine-chilling bouncers. Only Aravinda de Silva playing like a boy on a burning deck stood up to the fearsome duo of Donald and Schultz.

Schultz soon was let down by a spate of injuries which resulted in him missing important tours to Australia and the Old Blighty, respectively. It took Schultz roughly around two years to convalesce from his injuries and make a comeback into Test cricket.

It seemed like he took all the anger of missing out on Test cricket on the hapless Zimbabwean batsmen at Harare in 1995-96. Schultz and Donald combined together to cause mass-destruction in the one-off Test against Zimbabwe and, not surprisingly, South Africa won the match.

If South Africa’s die-hard fans were salivating at the prospect of watching the troika of pacers in Donald, Schultz and the young sensation, Shaun Pollock, against England at home in 1995-96, they were in for some disappointment. In the rain-marred first Test match at Centurion, Schultz broke down with a buttock injury. There was an inkling even before the match that Schultz wasn’t fit to play. But South Africa took the gamble of playing him and paid for it dearly.

By the 1996-97 season, with Shaun Pollock cementing his place in the side, Schultz seemed to be the forgotten man of South African cricket. The door, though, was left slightly ajar for Schultz in the final Test of the series against Australia in 1996-97. Pollock got injured and suddenly, from nowhere, the South African selectors plumped for Schultz.

The final Test at Centurion had turned into a dead-rubber, as Australia won the first two matches of that series. However, Schultz grabbed his golden opportunity at Centurion with both hands by taking six wickets in the game and South Africa won a consolation match. It was crystal clear that all those injuries had taken a heavy toll on his body, as he bowled at a reduced pace. But even while bowling at a reduced pace, he made the red cherry talk.

Emboldened by how Schultz made a triumphant return to Test cricket against Australia, there were again hopes of Schultz and Donald forging together a formidable fast bowling pair. Sadly though, he was destined to have a career blighted with injuries.

During the first Test against Pakistan at Rawalpindi in 1997-98, a blood vessel burst out in his left shoulder and soon at the age of just 27, Schultz was forced to retire from the game. Bad luck with injuries, though, continued to haunt Schultz even after he retired from cricket.

In an interview that he gave in 2011, Schultz talked about his injuries after he retired from the game: “I shattered my right elbow five years ago. During one of the structural repair operations I picked up a serious hospital infection.

“You can actually die from it. I’ve had 13 operations to get rid of it if. I had to sign a document giving the surgeons permission to amputate the arm if things deteriorated during surgery. The patience of my orthopaedic surgeon has paid off. They have now removed the joint from my elbow and have fused the joint.”

When South African cricket fans remember Schultz, they just imagine what might have been. Potentially a stellar career cut short by injuries meant that Schultz played just nine Tests, but at the same time, he took 37 wickets at a jaw-dropping average of 20.24. His awe-inspiring strike rate of 46.83 gives ample proof of his immense ability.

In fact, a bowling attack made up of Donald, Pollock and Schultz could have certainly resulted in South Africa conquering exalted heights. In the writer’s opinion, if Schultz had played for a longer period, South Africa could have very well usurped Australia as the No 1-ranked Test team in the 90s.

Here is a cricketer who has gone under the surgeon’s knife a mind-boggling 21 times. Nowadays, Schultz can’t even bend his right-arm. In spite of all those debilitating injuries, Schultz has suffered; with a never-say-die attitude and by battling his inner-demons, he has erased those fine lines of pain and distress to come out as a true winner every time.