Lara’s glittering career is replete with big scores including an innings of 277 at the Sydney Cricket Ground.

Brian Charles Lara announced his arrival on the world stage at the Sydney Cricket Ground (SCG) in January 1993 with an unforgettable knock. Lara’s glittering career is replete with big scores, and his innings of 277 at the SCG was the first in a long line that was to unfold in the years to come. Indeed, it was his first-ever Test hundred.

Prior to the Sydney Test of 1993, Lara had played only four Tests. He made his debut in December 1990, but had to wait for more than a year for another opportunity. Coming into the Sydney Test, Lara had scored three fifties and averaged 30.50. On a larger perspective, it was the third Test of the series, and West Indies were 0-1 down.

The traditional New Year’s Test began with Australia winning the toss and electing to bat first and, powered by Steve Waugh’s hundred, amassed 503. Four other batsmen got fifties.

West Indies commenced their innings late on Day Two and lost Phil Simmons with only 13 on the board. Richie Richardson and Desmond Haynes saw the day through to see West Indies finish at 24 for one.

Early on Day Three, Haynes was bowled by Greg Matthews to signal the arrival of Lara. West Indies were under pressure at 31 for two. Out in the centre were an established pro and a promising rookie. Little did anyone know that the rookie would steal the show. Lara was flamboyant, playing the ball with an exaggerated backlift.  His off-side play was a sight for sore eyes. He played on the rise and seemed to have copious time while executing a shot – unmistakable signs of greatness. The cover-drives, fluent punches and the cuts had authority written all over them.

The manner in which he adjusted to the length was admirable. Whenever the spinners pitched it short, he transferred his weight back in quick time to dispatch it to the boundary with power. Such was his dominance that he outscored Richardson. He got to his hundred on Day Three even as Richardson finished unbeaten on 94.

On Day Four, Richardson completed his hundred, but fell shortly thereafter; the Richardson-Lara stand was worth a whopping 293 runs. Lara was undeterred and sustained his dominance over the Australian attack. He maintained a healthy strike-rate and moved past many milestones. The West Indies were well and truly safe with him around.

Just when he had raised expectations of scoring a triple hundred, he was unfortunate to be run-out. Lara returned to the pavilion a hero – and remained a hero right through his career. The youngster had made a statement and sown the seeds of his side’s revival on the tour of Australia. His 277 came off 372 balls at a strike-rate 74.46. It contained 38 hits to the fence.

In the years that followed, Lara went on to become a legend. He first scored 375 to take the highest individual score. When that was taken away from him, he bounced back by scoring an unbeaten 400. Along the way, there were many other epics – ones that saw him going on and on. It was that ability to convert his hundreds into gigantic ones that puts him in a different league all together.

Coming back to West Indies’ tour to Australia 1992-93, the tourists went on to win the next game at Adelaide by a small margin of one run. They sealed the series in the fifth Test with a comprehensive innings victory, with Curtly Ambrose wrecking havoc on the fastest wicket in the world at the WACA. Those were the days when the West Indian kings ruled. Sadly, the West Indies couldn’t rule long in Lara’s career. And that was the biggest tragedy in Lara’s phenomenal career.

Coaches need coaching in how to smile! 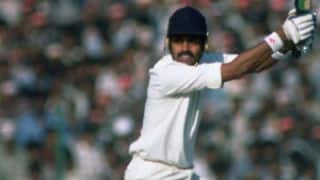 Dilip Vengsarkar scores 166 on beast of an under-prepared wicket; livid at presentation ceremony