On October 16, 1995, Brian Lara’s 169 propelled West Indies to the final of the triangular tournament at Sharjah. The knock, although 21 short of the world record for the highest ODI score at the time, had the makings of the finest innings of all time in the abridged format. The Sri Lankans almost notched off an incredible victory, but sadly it wasn’t to be. Karthik Parimal looks back at that glossy innings from the master. 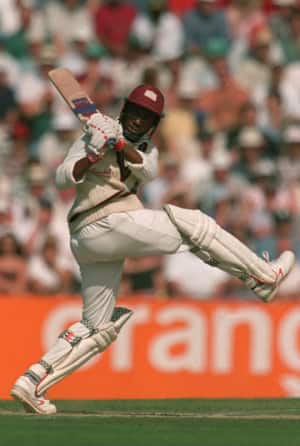 Brian Lara dominated the Sri Lankan seamers at Sharjah on his way to 169. He also, cut and drove the spinners with disdain © Getty Images

On October 16, 1995, Brian Lara’s 169 propelled West Indies to the final of the triangular tournament at Sharjah. The knock, although 21 short of the world record for the highest ODI score at the time, had the makings of the finest innings of all time in the abridged format. The Sri Lankans almost notched off an incredible victory, but sadly it wasn’t to be. Karthik Parimal looks back at that glossy innings from the master.

Brian Lara’s wizardry with the willow was certainly a known entity well before the commencement of the triangular series in Sharjah in October 1995. His hunger for big scores was insatiable, as was evident in his swelling statistics prior to this eventful game against Sri Lanka at the Sharjah Cricket Association Stadium — a venue which is usually at its boisterous best whenever Pakistan grace the lush green outfield. Some of his big scores in Test cricket at the time read 277 against Australia, 375 against England and 145 versus New Zealand. In One-Day Internationals (ODIs), his best was 153, incidentally, at Sharjah against Pakistan.

In the absence of the locals’ favourites, very few braved the heat to watch the two island nations compete; but the ones who did witnessed an innings that went down in the annals of the sport as one of the finest ever in limited-overs.

West Indies had their backs to the wall. Their first round fixtures, against Pakistan and Sri Lanka, ended in narrow defeats. Languishing at the bottom of the table, it was imperative they won both their remaining games in the second round to surge ahead. In their next meeting, Lara smashed a half-century against Pakistan, who looked impregnable until that point in the tournament, to help his side claw back into the race. A replication of that effort was needed against the unpredictable Sri Lankans the next morning. Devoid of any exhaustion, Lara blitzed his way into record books.

On previous occasions in the triangular series, Richie Richardson, the West Indian skipper, chose to field first and drew flak following the repercussions. This time, however, he decided otherwise, opting to bat first on what appeared to be one of the flattest tracks in Asia. “For once, Richardson chose to bat,” aptly noted Wisden. Early trouble greeted West Indies when Pramodaya Wickramasinghe trapped Stuart Williams plumb in front of the stumps, and Lara was summoned to the crease within the first two overs of the innings. The fall of wicket eventually turned out to be carnage in disguise for the Sri Lankans.

Although Lara’s swagger wasn’t as prominent as his predecessor Viv Richards’s, his strokes on that day (and perhaps most days) matched the latter’s. With just a maroon cap guarding his busy head, he thwacked the seamers on both sides of the wicket, albeit he wasn’t to contend with them for long. Sri Lankan captain Arjuna Ranatunga quickly roped in the spinners, but Lara’s bludgeoning, if that was possible, turned even more aggressive. Under pressure, the bowlers offered notable width to the southpaw who, after the customary shuffle and few other numerous wonderful movements, got into a good position to attack the ball off either foot.

Richardson, at the other end, played the perfect second-fiddle. While Lara was on his way to a run-a-ball fifty, he was content with his stoic progress. Lara cut, pulled and drove the spinners with disdain before a rare mistimed hit off Kumar Dharmasena to deep square-leg brought up his second consecutive half-century. At that juncture, West Indies’ score (97 for two in 18 overs) looked ominous, and it became evident that their final total was going to be directly proportional to the time Lara’s spent at the wicket.

Soon, Aravinda de Silva and Muttiah Muralitharan were hushed in to stem the flow of runs, but Lara was by then in his element. Sanath Jayasuriya was given a brief spell, too, but an antidote to counteract the left-hander’s blitzkrieg remained elusive. While de Silva was pummelled almost every over, Muralitharan was cautiously dealt with, although a six over mid-wicket was soon launched off him. The steam Lara had been letting off through his willow was certainly uncontainable on the day. Within 32 overs, he galloped to 99 off just 91 deliveries, and a punch towards Ranatunga at short mid-wicket took him to an incredible century, his sixth in ODIs.

Immediately after the subdued celebrations ended, Ranatunga dropped a screaming chance at cover, much to Lara’s relief. Thereafter, he went berserk. Nonchalantly stepping out of his crease, he hammered Jayasuriya for 30 runs in his four overs before meting out similar treatment to de Silva — who conceded 51 runs from six overs on the whole. The 150-run mark, much like his other landmarks during the course of the knock, was brought up by a calculated shot, this time a dab towards the long-off fielder. Four runs later, he surpassed his previous highest score of 153, etched against the Pakistanis at the same venue eleven months earlier.

Talks of Lara becoming the first man to score a double-hundred in ODIs were beginning to reverberate in the press box at the stadium, but on 169, a shot across the line to Dharmasena ensured the ball swiftly travelled between his bat and pads to rattle the timber. Against the run of play came to an abrupt end a magnificent innings, one that eventually turned out to be Lara’s best in a career that went on to span 299 ODI games. His innings comprised of 15 fours and four sixes, and the West Indians were comfortably perched at 282 for six with five overs still in the dock. As Wisden observed, “he fell 21 short of beating Viv Richards’s one-day international best of 189 and adding that record to the Test and First-Class ones he gained in 1994.”

West Indies amassed 333 for seven from their allotted quota of 50 overs, but the Sri Lankans were far from demoralised. Hashan Tillakaratne’s century meant that they resurged from 103 for five to 329 for nine, but he was dismissed in the final over and defeat was conceded by a narrow margin of four runs. West Indies qualified for the final of the tournament where, once again, they squared off against the Sri Lankans, but were not to have the last laugh in that fixture. Lara was strangled for just eight and Sri Lanka usurped the trophy by 50 runs.

Man of the Match: Brian Lara