Bruce Pairaudeau: Frenchman who scored hundred on West Indies debut and led a side to Plunket Shield

Bruce Pairaudeau: Frenchman who scored hundred on West Indies debut and led a side to Plunket Shield

Despite scoring a hundred on Test debut, Bruce Pairaudeau did not have an exceptional career. He also led Northern Districts to their maiden Plunket Shield title,

The bespectacled Bruce Pairaudeau was born on April 14, 1931. Abhishek Mukherjee looks at the Frenchman, a Test debut centurion for West Indies and went onto lead a New Zealand side to a Plunket Shield title.

In an interview with Richard Boock for The New Zealand Herald, Bruce Hamilton Pairaudeau had claimed that he was one of the three Frenchmen to have played Test cricket (the other two being Andy Ganteaume and Richie Benaud: of course, he had missed John Benaud).

Pairaudeau was one of those old-school openers who relied on patience and perseverance — and looked even more so thanks to his studious bespectacled look; when it came to opening up, however, he could be a spectacle to behold. Winston McGowan wrote on Stabroek News that Pairaudeau was a “stylish, orthodox, bespectacled right-handed opening batsman who sometimes batted in the middle-order.”

Despite his willingness to survive at the crease and unwavering tenacity, Pairaudeau did not have an exceptional career, scoring 4,930 runs at a mere 32.01 with 11 hundreds from 89 matches. He fared worse at Test level, managing 454 at 21.61, despite scoring a hundred on Test debut.

Batting up the order in one of the strongest batting line-ups did not help. He was a better batsman in the middle-order:

Pairaudeau made his First-Class debut against Trinidad at 15 years 335 days, then a Guyanese record (the record has subsequently been bettered by Ramnaresh Sarwan, who had started his First-Class career at 15 years 245 days). He managed a mere 32 from 4 innings from the first season.

He opened the next season with 130 against Jamaica, and bettered it with 161 against Barbados. He missed out on the 1950 tour of England, which, according to most Guyanese, was an unfair omission. Never one to give up, Pairaudeau had an excellent season with Burnley in Lancashire League.

Then came back-to-back matches against Jamaica, where he scored 77 and 101 in the first and 126 in the second innings. He got an immediate call-up for the first Test of the home series against India at Queen’s Park Oval. McGowan mentioned that a Guyanese commentator referred to Pairaudeau’s selection as “more like postponed justice”.

The Indians put up 417 on the board, before unleashing Subhash Gupte. Three wickets went down by the time the score reached 89, and though, Everton Weekes and Clyde Walcott added 101 for the fourth wicket, the hosts still needed to avoid the follow-on when Pairaudeau joined Weekes.

Seldom had a spinner of Gupte’s calibre played West Indies; he was ably supported by Vinoo Mankad, but both Weekes and Pairaudeau used their feet to great use, driving through the V and piling up runs. Gupte and Mankad toiled on relentlessly, but the pair would simply not budge. Pairaudeau gave a chance on 82, but “Nana” Joshi grassed a catch off Gulabrai Ramchand down the leg-side.

They eventually added 219, before Weekes fell for a glorious 207; a mere four were added by the time Gerry Gomez and Alfie Binns were back in the pavilion, but Frank King hung around gamely, letting Pairaudeau to become the third West Indian (after George Headley and Ganteaume) and first Guyanese to score a Test hundred on debut.

He eventually fell for 115, being stumped off Gupte (who finished with marathon figures of seven for 162). The Test ended in a draw, and Pairaudeau was toasted by the nation. “Pairaudeau Carves Name in ‘Hall of Fame’ With First Appearance 100” ran the headline on Daily Argosy.

Opening with Jeff Stollmeyer, Pairaudeau scored 43 in his second Test innings — this time at Kensington Oval; the pair added 52, West Indies piled up 296, and Sonny Ramadhin and Alf Valentine bowled the hosts to a 129-run victory. West Indies hung on to their lead for the rest of the series.

After scoring a duck in the second innings at Kensington Oval, however, Pairaudeau never got going. He managed 58 in the last Test at Sabina Park, but was drowned by Frank Worrell (237), Weekes (109), and Walcott (118): it was the first time that the three Ws scored hundreds in an innings.

Pairaudeau was dropped from the Sabina Park Test against England next season, but came back at Kensington Oval and joined Walcott with the score on 25 for 3. Once again he helped one of the Ws form a partnership; this time they added 165, before Pairaudeau was caught off Jim Laker for 71. West Indies won the Test and went 2-0 up in the series.

He missed the Bourda Test that England won easily and was brought back at Queen’s Park Oval. He sat in the pavilion watching the three Ws — Weekes (206), Worrell (167), and Walcott (124) — scoring hundreds again, and when poor Pairaudeau walked out at 517 for 4, he never got going. With Walcott going ballistic at the other end, he got run out for a duck in a 23-run partnership.

His misfortune continued: opening the batting in the second innings he was hit-wicket off Trevor Bailey for 5. He was dropped in favour of a Barbadian youngster called Garry Sobers for the fifth Test at Sabina Park, and England won the Test to square the series.

Pairaudeau did not get picked in the home series against Australia, but made it to the New Zealand tour. West Indies won the series 3-1 (the defeat was, incidentally, New Zealand’s maiden Test triumph), and Pairaudeau did nothing of note barring the 68 at Basin Reserve. He dominated the opening stand with Sobers, but fell shortly afterwards. Barring that he reached double-figures only once (that too, 13) from 6 innings in that series. To be fair, he scored 104 against Wellington at Basin Reserve and top-scored with 80 against Central Districts at Wanganui, and finished with 287 runs at 31.88.

Just before his return he had a talk with a friend. He later recollected in an interview with Ateet Sharma for India Today: “One of my friends gave me introductions to people all over New Zealand. During the last Test, he asked me if I have seen everything I wanted to see here. I said yes. He then asked if I was happy with whatever I had seen. I replied yes. What are you gonna do, he further asked me. I said I am gonna come back. He said that’s funny for you to say that. You’ve come to New Zealand, you’ve seen it, you are happy, what is the point of going all the way back to the West Indies? You will have to pay your fare back to New Zealand.”

Pairaudeau had fallen in love with the country at first sight, and would come back later. But all that will come in due course of time. He would come back.

To Blighty, and the eight-and-a-half-hour long run

Selected for the England tour, Pairaudeau started on a high, top-scoring with 127 against Cambridge University in his second match. He was thus selected for the first Test at Edgbaston. It seemed to be an encore of 1950 despite Valentine’s absence, as Ramadhin ran through England, taking seven for 49 and bowling them out for 186.

Pairaudeau was clean bowled by a Fred Trueman yorker for one. Rohan Kanhai and Walcott took the score to 83 for 1 at stumps. Early on Day Two, Walcott pulled a leg muscle, and Pairaudeau, the only dismissed batsman, appeared as a runner. He stayed on as he saw Kanhai and Weekes depart.

When Walcott eventually fell for a 262-minute 90, Pairaudeau had already been running for close to 200 minutes for him. When Sobers holed out against Brian Statham a few minutes later, Worrell walked out, and, horror, horror, poor Pairaudeau had been summoned as a runner again: this time it was a 293-minute long stretch, extending Pairaudeau’s stay to over 500 minutes (if one includes the 14 minutes he had actually batted himself).

“Pairaudeau occupied an abnormal amount of time in the middle for a man who scored only a single”, wrote Wisden. “He spent three-and-a-quarter hours as runner for Walcott and then five hours for Worrell.” Peter May (285) and Colin Cowdrey (154) then added 411 for the fourth stand, erasing the 288-run deficit. Trueman, Laker, and Tony Lock then reduced West Indies to 72 for seven in 60 overs (Pairaudeau managed a mere 7) before time ran out.

West Indies managed to survive the Edgbaston scare, but lost three of the remaining four. Pairaudeau played in only the Headingley Test. Demoted to seven (Worrell and Sobers opened batting) he scored 6 in each innings; West Indies were demolished by Peter Loader (who took the first hat-trick since World War II) and lost by an innings. Pairaudeau never played another Test.

His only moment of glory on the tour came against Hampshire at Southampton: after the tourists had conceded a 49-run lead he carved out a career-best 163; Weekes and Worrell came to his assistance, and the West Indians reached 387 to save the Test. He finished the tour with 781 runs at a lowly 23.66.

Pairaudeau played a single match against the touring Pakistanis that winter, but he had bigger things on his mind. He had remembered his earlier discussion with a friend. He followed Sammy Gullien’s footsteps and migrated to New Zealand. He obtained a contract with Northern Districts and started the ‘second innings’ of his life.

The political unrest in Guyana had a lot to do with it. Pairaudeau later told Boock: “In 1955-56 we came here , and then we were going to tour England. In Guyana, the troubles were getting worse, but I hadn’t told anyone I was heading for New Zealand. I’d booked my tickets before anybody found out. They said: ‘You’re joking’, and I replied: ‘No, here’s the bloody ticket’. They said I was mad. I recall saying, ‘I’m not mad’, and ‘You’ll all have to get out before long. I’ll give you 10 years and you’ll all be gone’. Within five years, Georgetown was set ablaze, there was awful trouble.”

As Boock later wrote, “Pairaudeau had three main ambitions: to score enough hundreds to be picked for the West Indies, to score a test century for them and to tour England. As soon as he fulfilled that final goal, he booked his ticket for New Zealand and packed his bags.”

He found form in 1958-59, scoring six fifties in consecutive innings. With 412 runs at 45.77 he finished only next to John Reid in both runs and averages. In the process he was named New Zealand Cricket Almanac Player of the Year. Two seasons later, he was appointed captain of Northern Districts, and led them for the final seven seasons of his career.

The second season of these seasons is the one he is usually remembered for. He scored 243 at 24.30, but that not the major contribution he made. Northern Districts were set to chase down 182 to win the decider against Canterbury and were down to 50 for 3 when Bert Sutcliffe joined Pairaudeau.

The pair chased down the remaining runs: Pairaudeau remained unbeaten on 68 and Sutcliffe on 77 as Northern Districts clinched their maiden Plunket Shield title. It was perhaps Pairaudeau’s greatest cricket achievement. He continued to play till 1966-67, hanging up his boots unceremoniously after he scored a pair against Central Districts in his last match.

Pairaudeau has settled down in Hamilton with his wife Gillian. He was also a champion table-tennis player and a good singer with an exceptional memory for lyrics. Their daughter Toni, a rising table-tennis star, had passed away, but they still have their son and three grandchildren. Northern Districts have not forgotten him, and the Under-19 Tournament in Hamilton has been named after him. 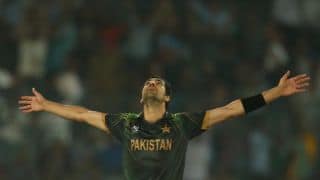