Since Nathan Lyon debut in August 2011, he has played in 26 out of the 30 Tests played by Australia — second only to captain Michael Clarke, who has played 29. The only Tests he was rightfully left out of was the green mamba in Perth against India in 2011; his exclusion from the other three Tests was puzzling to say the least.

Since Nathan Lyon debuted in August 2011, he has played in 26 out of the 30 Tests played by Australia — second only to captain Michael Clarke, who has played 29.  The only Tests he was rightfully left out of was the green mamba in Perth against India in 2011; his exclusion from the other three Tests was puzzling to say the least.

In the 26 Tests he has played, Lyon received the greatest criticism 12 months ago in Adelaide after he failed to win a Test match for Australia on a fifth day track with abundance of runs to play with.  Since that moment, Lyon has had a tough campaign in India, tweaked his action slightly, featured in Ashes Test win but the most thing he has learnt the modern art of bowling consistently around the wicket to right hand batsmen.

The first time Lyon bowled consistently from around the wicket to the right handers was in the fourth Test in Delhi on a rank turner.  Lyon finished on a losing side, but had match figures of 9/165 — his best figures thus far.

Before the 4th Test match in Delhi, Lyon had 67 wickets at 35.17, but since that match, Lyon has bowled consistently around the wicket and has had great success.  Including the Delhi Test, Lyon figures from the five Tests are 22 wickets at 24.13.

Bruce Yardley, Australia’s second most successful finger spinner with over 100 wickets explains why bowling around the wicket is a successful tactic:  “Modern day batsmen rarely use their feet and struggle to cope with the change of angle. I watched the English play him in the first Test in Brisbane and the right hand batsmen played him as if he was bowling over the wicket, working everything with the spin. Spin bowling is all about creating different angles and if the batsmen are not accustomed to playing different angles they find it hard to cope. Maybe the English batsmen have not yet become accustomed to the angle from around the wicket.”

If we dwell further into statistics it’s revealing how successful the around the wicket tactic has been against top order right hand batsmen.  Before the Delhi Test match, Lyon had dismissed 48 right hand batsmen, out which 26 were tail enders (No 8 – No 11) that is over 50%. In the next five Tests, out of the 18 right-handed dismissals, 16 are top order batsmen (1 -7) and 14 of those wickets are from bowling around the wicket.

The purpose of bowling around the wicket enables Lyon to pitch bowl on the stumps and straighten in down the line or continue with the angle, increasing chances of LBW if the ball turns or the batsmen plays down the line and also increases the chances of batsmen edging it to the keeper or slip.

Yardley recollected on how a single ball that turns from around the wicket to a right hand batsmen can have an impact on the batsmen. “I did it to Allan Lamb in 82. Greg [Chappell] told  me, ‘all you have to do is get one to spin back. And if the next one goes straight on, the batsmen will nick it.’ And it happened. It was a good move because Lamb was comfortable when I bowled over the wicket.”

Naturally, bowling around the wicket has also impacted the mode of dismissals.  The most significant one is leg before wicket.  In the first 21 Tests, Lyon had five LBW dismissals of the right-hand batsmen. He has already eclipsed that mark by two since that Test match in Delhi.

The Adelaide Oval pitch might not be as a rank turner as the one in Delhi, but has Lyon showed in Brisbane and in England that bowling around the wicket can bring success with the right field setting. He might have missed the trick 12 months ago, but he has another dimension that could ensure he bowls his team to a victory on the second innings this time around. Trevor Bailey: One of the greatest all-rounders produced by England 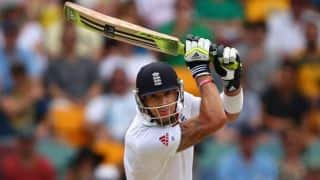