CB Fry hit his sixth First-Class hundred on the trot on September 12, 1901 at Lord’s. Abhishek Mukherjee looks at a world record that still stands today.

Yorkshire had generously agreed to take on the Rest of England in what was the posthumous benefit match of the Cambridge University star and Kent mainstay William Yardley. HS Altham had mentioned in his A History of Cricket that only WG Grace was considered a superior to Yardley among amateur batsmen.

Yardley was also an author (he ghost-wrote Grace’s autobiography), a playwright, a theatre critic, and an actor. He passed away on October 28, 1900, and the match was supposed to be a fundraiser for his widow and children.

It was supposed to be a high-profile contest between two outstanding teams. On the one hand there were the likes of John Tunnicliffe, Ted Wainwright, and the Kirkheaton duo of George Hirst and Wilfred Rhodes. On the other there were Pelham Warner, Gilbert Jessop, Albert Trott, and Charles Burgess Fry.

Fry had been in sublime form, however. His performances in the previous five First-Class matches read: 88 and 106 against Hampshire at Portsmouth; 209 against Yorkshire at Hove; 149 against Middlesex at Hove; 105 against Surrey at The Oval; and 140 against Kent at Hove. Could he score a sixth?

Warner and Arthur Jones set off well against Hirst and Rhodes; once the new ball was seen off, both came into their elements against the off-breaks of Wainwright and the leg-breaks of John Brown. Runs came easily, and it did not seem that neither was in any sort of mood of getting out.

Jones outscored Warner easily but both of them followed after the advent of Ernest Smith’s pace. From 89 without loss the Rest were suddenly 107 for 2 when Fry joined George Beldam. The two batted at a brisk pace and added 94 for the third wicket before Rhodes claimed Beldam.

Jessop walked out. On papers it was a dream partnership — the serene presence of Fry and the brutal hitting of Jessop; it was what the spectators had come to watch; it was the kind of batting that would have made more people come in, thus making things better for Yardley’s family.

Fry soon reached 51 — a score that brought up his 13,000 runs in First-Class cricket. He was, however, quite content to play second fiddle to Jessop’s carnage: the Gloucestershire dynamo exploded, and every bowler — Hirst and Rhodes included — were taken to the cleaners.

After a quiet start Jessop exploded: he reached fifty in forty minutes, and the next fifty took about another half-an-hour. He soon went past Fry, who, to quote The Glasgow Herald, was reduced to little more than an onlooker.

For a change it was not Fry and KS Ranjitsinhji: it was Jessop instead. The silken wristwork the spectators at Hove had so got used to watching had been replaced by some of the most power-packed hitting at Lord’s. It was as if the feline elegance of the same creature had somehow changed to feral aggression.

Fry, of course, was the constant factor. He had epitomised the Occident like few others have. He was patient, he was calm, he played every ball on its merit, he made every stroke look authentic, and more often than not his confident strokeplay boosted the confidence of the man at the other end. Seldom has any cricketer been as meticulous a student of the sport and as mathematical in precision.

In an era when most batsmen played automatically forward, Fry and Ranji had taken after Arthur Shrewsbury to revolutionise batting from the crease; cuts and pulls came into play, and the sheer variety of strokeplay, combined with the invincible technique, had made Fry one of the most formidable batsmen of his era.

It was no different on this day. While Jessop kept on finding the boundary with his cruel shoulders, Fry, quite content to remain in the backseat, helped himself to the occasional boundary. He did not make an attempt to emulate Jessop’s breakneck pace, and reached his hundred in about three hours of batting.

For the first time in the history of cricket had a batsman scored hundreds in six consecutive First-Class innings. Almost immediately afterwards, he hit Rhodes to Hirstat at cover-point for 105. The Lord’s crowd was stunned for a moment before breaking out into a spontaneous applause. Wisden later went on to call it “a beautiful innings”.

The rest of the match

John Gunn joined Jessop. He was bowled by Lees Whitehead in what turned out to be the last ball of the day. The Rest finished at half-past five on 460 for 5 with Jessop still there on an explosive 176, three short of his highest First-Class score.

The rest of the innings was a contest between Hirst and Jessop. Jessop bludgeoned his way to a 135-minute 200 and eventually fell for a 150-minute 233 with 33 fours and two fives. He scored 57 of the 66 managed by The Rest on the second morning.

On the other hand, Hirst bowled a consistent line and length and ran through the batting line-up; he picked up 5 wickets — all bowled — including Jessop’s. He finished with 5 for 92 as The Rest finished on 526 from 120.3 overs, losing their final 6 wickets for 66 runs.

After a quiet spell from George Wilson, the leg-breaks of Jones were introduced to assist Albert Trott’s pace. He removed both openers immediately. Trott, definitely not the happiest person after being bowled by Hirst for a duck earlier in the day, took out the next two, and Yorkshire were suddenly reduced to 57 for 4.

The ubiquitous Hirst then added 55 with Lord Hawke and 58 more with Smith, but once he was caught-behind off Jimmy Sinclair’s leg-breaks for 48 Trott ran through the rest. Smith top-scored with 52, Wainwright did not bat, and Yorkshire were bowled out for 229.

Trott had picked up 5 for 86, and the follow-on was enforced. Before stumps, Trott whisked out two more wickets, and Yorkshire finished the day at 15 for 2, 282 runs behind.

Day Three began in a blur, with Trott taking out three more wickets in no time: Yorkshire were reduced to 31 for 5; and Trott had taken a 10-for. Brown, who had held one end up, eventually became the ex-Australian’s sixth victim.

Yorkshire eventually crossed 100, and Trott’s opportunity to take ten wickets in an innings was broken by Sinclair, who ran through Wainwright’s defence. Trott took two more wickets and Wilson took one; Smith top-scored again as he was left stranded with 59 as Yorkshire collapsed to 182 and lost by an innings and 115 runs. Trott finished with 8 for 84 in the innings and 13 for 170 in the match.

– The match helped raise approximately £350 for Yardley’s family. It was a substantial amount in those days.
– Fry’s record still stands, though it has been equalled by Don Bradman and Mike Procter: 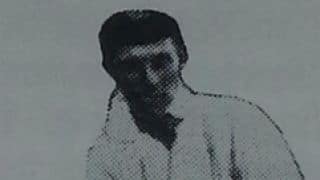