It transpired later that the ugly hand of match-fixing was responsible for tweaking the outcome of the Centurion Test between England and South Africa.

On January 18, 2000, South Africa and England each forfeited an innings to revive a dying Test match and engineer an enthralling finish. It transpired later that the ugly hand of match-fixing was responsible for tweaking the outcome of the match. Arunabha Sengupta recalls the infamous Centurion Test.

When it happened, it was considered to be the epitome of sporting decisions. Two captains consulted each other as the Test match was dying a soggy death after three days of persistent rain, hauled it up and breathed life into it, ensuring a fascinating finish that kept the delighted spectators on the edge of their seats.

This was exemplary conduct — a landmark in the cricketing annals, something that would remain a lodestar for those captains who killed matches and popular interest with their safety-first tactics.

And when some traditionalists in ICC whispered about setting up a contrived result and thereby breaching some unwritten code of conduct by, Hansie Cronje growled back, “I would be disappointed if this is the attitude and do not want to be part of the game if this is their thinking. When I arrived at the ground I found there were 22 players who wanted to get involved in a game and the mood was a positive one. Both sides were in with a chance of winning with seven balls of the match remaining and if this is what the game is about then I feel we have given the spectator something in return for their support.”

He received solid support from the cricketing community. Numerous cricketers, including South African coach Bob Woolmer, English wicketkeeper batsman during the Test, Alec Stewart, and the Sri Lankan captain Arjuna Ranatunga, felt that the Cronje-Nasser Hussain pact was the exemplary attitude which could haul cricket by the bootstraps and carry it into a positive 21st century.

Even the crowd at Centurion were not complaining after the narrow loss. “Of course I am disappointed we lost and our record of not losing in 14 matches has gone, but the choice was there and had to be taken,” Cronje remarked.

If the story of R53,000 and a leather jacket had remained untold, Hansie Cronje would probably have gone down as one of the greatest sporting captains of all time.

Unfortunately, what transpired as a thrilling match, after pioneering and laudable forfeiture of an innings each by both sides, is now looked at through the murky lens tarnished by the sordid world of bookies and match-fixers.

A Test of two days

Inserted by Nasser Hussain on a juicy pitch, under overcast conditions, South Africa were struggling at 155 for six when play was stopped after 45 overs on the first day. Gary Kirsten and Cronje himself registered ducks, and Herschelle Gibbs managed just 3. The English pace bowlers, fired up by the helpful conditions, had made life difficult for the home batsmen. However, things could have looked even brighter for the tourists on that gloomy day had Darren Gough, Alan Mullally, Andy Caddick and Chris Silverwood not pitched too short too often. Darryl Cullinan had fought back with 45, and when play was called off, all-rounders Lance Klusener and Shaun Pollock were at the crease.

The unseasonal rains continued through the next three days. By the time sun emerged on the last day, too much time had been lost. With the series already won by South Africa, it was assumed that players would go through the motions before an early end on the final day. The local cricket union, Northerns, had not been insured against weather and the losses due to the days without action amounted to nearly two million rands.

However, not many knew that some unprecedented scheme was afoot. Just before the match resumed on the final day, Cronje came across Alec Stewart on the stairs that led up to the dressing rooms and asked whether Hussain would consider an offer. According to Hussain, the suggestion was to go for 270 in 73 overs.

There was confusion in the English camp. First of all, the suggestion had come as a bolt from the blue. This was Test cricket after all. Secondly, the pitch had been bowler friendly on the first day. Hussain, coach Duncan Fletcher, and senior pros Michael Atherton and Stewart agreed that they would not decide until they had seen how the wicket played on that day.

Well, the wicket had turned friendly. And more than that, Darren Gough had come into the field with a dreadful hangover. He had stayed up until the early hours of the morning drinking with golfer Ian Woosnam in a hotel bar.

“I have never walked on to a cricket field in such a disgraceful, self-induced state of disrepair as I was that last morning in Pretoria,” Gough admitted in his autobiography later. “I had already thrown up in the dressing room and I felt so bad I wasn’t sure whether I had a hangover or was still drunk.”

“He bowled like a pile of shit,” recalled Hussain, who had been appalled by the state in which his fast bowler turned up. In order to teach him a lesson, he had kept him on for 10 overs.

As a result, Klusener and Pollock made merry, and 40 minutes into the day, Hussain sent a message into the South African dressing room asking whether Cronje was still interested in the deal. He aimed low, offering to chase 250. The South African captain responded with an immediate affirmative. Even Hussain was surprised that there had been no haggling.

The proposal Cronje made was 245 runs from 76 overs. A boundary squeezed from the last ball faced by Paul Adams ensured a 249 run target.

The confusion regarding forfeitures

As Cronje closed the innings, Brian Bolus, the chairman of the England Management Advisory Committee, pointed out that no provision existed in the Laws for the forfeiture of a first innings, although it had been sanctioned in First-Class cricket for some years. However, a new code of the Laws, already in draft form and to take effect later in the year, would allow first-innings forfeitures.

Bolus was effusive in his praise for the move of the captains and maintained that “sanity had prevailed”. Cronje now met Barry Jarman, the ICC match referee, to discuss the ambiguity of the Laws as it allowed forfeiture of only the second innings. Jarman agreed to the pan, happy that the suggestion was within the spirit of the game.

Shaun Pollock did claim that the decision was supported by the team, but when South Africa came in to defend their total, they were short of bowing resources. Allan Donald was not playing due to gout. Nantie Hayward had been flown in on the first day of the Test, arriving just in time for the delayed start after lunch. To make things worse, Paul Adams broke a finger of his spinning hand by crashing into the advertisement hoardings while trying a save in the outfield. The only spinning option was Pieter Strydom, a debutant, in the side only because of injury to Jonty Rhodes.

Yet, Atherton snicked Pollock early. After a stable partnership, Mark Butcher was deceived by a slower ball from Klusener, and Hussain hit another slower — from Pollock — into the hands of cover. When Chris Adams fended a short ball from Hayward to Mark Boucher in the 38th over, it was 102 for 4. The Englishmen were by now having second thoughts about accepting the challenge.

Michael Vaughan, demoted down the order for his slow batting earlier in the series, now walked out. At the other end was Stewart. The world expected the two to hang in for a draw, but the spirit of challenge had made its way into their veins. Vaughan drove crisply again and again, threading boundaries through the covers. At the other end, Stewart was steady, calmly picking up valuable runs — helped by some innocuous bowling by Strydom. By the 70th over, they had taken the score to 228. Just 21 runs remained, the match almost in the bag, when panic started making waves in the English camp.

Stewart was caught behind off Hayward. All-rounder Darren Maddy, a replacement for indisposed Andrew Flintoff, was run out after chancing Kirsten’s arm for a second run. Two balls later Pollock snapped up Caddick. And after an excellent innings, Vaughan backed away to hit Hayward through the covers to have his stumps disarranged. It was 240 for 8, 9 runs were required from 13 balls.

Silverwood and Gough scrambled a few dangerous runs, and when the former lashed out at the last ball of the penultimate over towards the deep cover, Strydom did not pick it up against the sun, and a boundary resulted.

Hayward ran and bowled the first ball of the final over. Gough, by now cured of his hangover, pulled him to the boundary to give England the win. It had been an incredible Test match, revived from the doorstep of boring death — made as enthralling as one can wish to see.

Not everyone felt the same way though. Atherton later wrote of it as “the cheapest win of my Test career. For the first time in my life I felt completely flat at the moment of a Test victory. It wasn’t that I suspected match-fixing, but a Test match victory is a thing that has to be earned.”

In the Independent, Derek Pringle could not help voicing surprise. “Amazingly, given his reticence to attempt anything unusual, the South African captain agreed, even amending the target slightly in England’s favour. For those used to watching his strangling tactics in operation, the deal was completely out of character and cynics felt it smacked of a captain under pressure making a late bid to show his adventurous side.”

But, Cronje found a lot of support from the cricketing community, and loudly proclaimed his single-minded purpose to provide a good game of cricket. The general consensus was that the game had not been compromised as some claimed, but had been given a much required face-lift.

However, on April 12, the match-fixing scandal erupted. Within three days, the truth behind the Test match emerged.

A bookmaker, who would have suffered huge loss in case of a draw, had supposedly contacted Cronje on the fourth evening.

“He urged me to speak to Hussain about an early declaration,” Cronje confessed to the King Commission later that year. “He said if we declared he’d give $150,000 to charity.”

When Hussain agreed to the suggestion, Cronje immediately texted the bookmaker “the game is on”.

After the match, this bookmaker supposedly met Cronje and paid the South African captain R50,000 and gifted him a leather jacket — the price of the first fixed Test in the history of cricket.

Delighted by the unexpected win, Hussain had lavished Cronje with generous praise: “It was a very special thing that Hansie did and I hope he gets the credit he deserves. It certainly was a great finish to be a part of.”

His opinion understandably changed radically after the sad truth was made public. He wrote later:  “We can’t get away from that. It will always be remembered as a Test that was fixed.”

Man of the Match: Michael Vaughan.
Man of the Series: Darryl Cullinan. 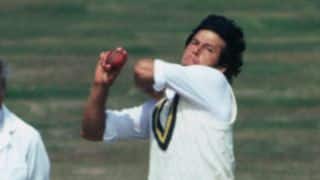