It was Rahul Dravid’s first series as full-time captain, and roughly the beginning of the Dravid-Greg Chappell era in Indian cricket.

December 6, 2005. After almost three days of the Chennai Test were washed out, Chaminda Vaas showed his class on a pitch that offered little to him. Abhishek Mukherjee looks back at a forgotten act of mind-numbing accuracy.

Those were troubled times. Sourav Ganguly had been replaced as captain of India, though he was a part of the team. It was Rahul Dravid’s first series as full-time captain, and roughly the beginning of the Dravid-Greg Chappell era in Indian cricket. It was Sri Lanka’s first Test on Indian soil after eight years. It was also a battle between world-class batsmen on both sides, and a contest involving three champion spinners.

There was also that man called Chaminda Vaas — the perpetual bridesmaid of the Sri Lankan attack. It was not his fault that Muttiah Muralitharan, the main bowler of his side, finished as the leading Test wicket-taker of all time. It was a shame that Vaas, a champion of the sport and one of the finest Sri Lankans to have embraced the sport, is remembered more for his astounding full name than his incredible bowling skills.

Planning a Test at Chepauk came with its risk. The Test turned out to be a damp squib when the first three days were rained off, thanks to a cyclone called Baaz. Play eventually started with barely two sessions left on Day Four. Not much was expected of the four sessions left in the Test.

The pitch was devoid of bounce of any kind. Wisden called it “undercooked”, and added that “ankles were in more danger than ribs”. It was under these circumstances that Dravid decided to have some batting practice.

Vaas opened bowling. The first ball did not rise above Gautam Gambhir’s knee, and soon afterwards Kumar Sangakkara walked up to the stumps. Gambhir played out a maiden. The proceedings did not deter Virender Sehwag, as he smashed two boundaries and ran two twos in Dilhara Fernando’s opening over.

The first ball of Vaas’ second over was the famous in-cutter. Gambhir was fooled by the movement (as many before him had); the ball rapped him on the pad, and that was that. Dravid walked out.

A ridiculously contrasting phase of cricket followed. While Dravid took 13 balls to get off the mark, Sehwag blazed away, with two boundaries off Vaas’ third over and three more off Fernando’s third. When he was finally caught at extra-cover by Marvan Atapattu off Vaas for a 28-ball 36, India had scored 42. The score included 3 extras.

Vaas was given a break, and was brought back just before stumps. Meanwhile, Murali extracted substantial turn, often causing a threat to the two maestros. India finished the day on 90 for 2 from 32.3 overs with Dravid on 30 and Tendulkar on 11.

Vaas tightened his noose the following morning. For once, Murali played the support act. The scorers stirred for a moment in the 35th over (Murali conceded 6), but there was no question of a run at the other end. Vaas bowled on and on, refusing to concede a single run. Even Dravid ran out of patience when he chased one and was caught-behind off Vaas.

VVS Laxman strode out. Tendulkar managed a boundary off Murali in the third ball of the 39th over. The next run was a single off the last ball of the 45th over. Murali had given way to Malinga Bandara in the interim.

Then Murali tossed one up. Tendulkar misjudged the flight, went on the backfoot, and was bowled by an off-break that turned a mile. A single with Laxman and Ganguly at the crease was not the best idea, but shortly afterwards Ganguly walked out, Laxman pushed a ball to square-leg and set off. A mix-up and a run out were inevitable, and Laxman walked back for a 43-ball 5.

MS Dhoni, the debutant wicketkeeper, joined Ganguly. Little did they know that Indian fans would be at loggerheads with each other over them for the decade to follow, and possibly beyond. They hit a boundary each before Ganguly fell to a low catch at point off Fernando. Irfan Pathan was fooled by Murali into hitting one back to him next over.

Ajit Agarkar drove one to cover and set off soon afterwards. He was run out comfortably after Dhoni sent him back. 128 for 8.

Dhoni decided to go for the shots, while Anil Kumble held one end up. He played out three more maidens to Vaas, whose figures read 20-14-15-3. The Indians were yet to score a run off the first 10 overs he had sent down the morning. Including the maiden over last evening, there had been 11 on the trot.

The erudite Chepauk fans stirred. Could Vaas do the unthinkable — emulate Bapu Nadkarni in the era of limited-overs cricket?

Then the unthinkable happened: Vaas conceded a run to Dhoni. Perhaps let down by this sudden catastrophe, he caught Kumble off his bowling next ball. Harbhajan Singh hit a four, but with 9 wickets down, Dhoni tried to clear long-off against Bandara, but could not make it.

There was little to play for. Irfan claimed Avishka Gunawardene with one that moved away late. Sangakkara, promoted to open, went after the bowling, with Mahela Jayawardene for company. It ended when Kumble trapped Sangakkara leg-before.

Jayawardene brought up his fifty from 59 balls. There was a brief diversion when a bottom edge off Agarkar beat Dhoni and hit the helmet. Sri Lanka got 5 penalties in the process. Jayawardene threw a hundred away when he hit Kumble to square-leg for an 80-ball 71.

Atapattu finally emerged at No. 4. Kumble bowled a short one that sped through, and unfortunately for Atapattu, kept low. The Sri Lankan captain attempted a pull, and was bowled. With not much to play for, the teams decided to call the Test off — but not before Sri Lanka had managed to secure a lead.

– Dravid was hospitalised with gastroenteritis before the third Test at Motera. Ganguly was left out, leaving Sehwag to lead India for the first time in Test cricket. India were reduced to 97 for 5, but Laxman (104) and Irfan (82) turned things around. India reached 382 and took a 176-run lead as Harbhajan claimed 7 for 62. Set to chase 509, Sri Lanka reached 201 for 4 before Kumble (5 for 89) and Harbhajan (3 for 79) bowled out the tourists for 249.

Man of the Match: Chaminda Vaas. 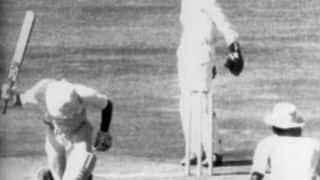