Chandika Hathurusingha: Sri Lankan all-rounder whose international career did not live up to expectations

Chandika Hathurusingha: Sri Lankan all-rounder whose international career did not live up to expectations

Chandika Hathurusingha, born September 13, 1968, was a Sri Lankan all-rounder in the 1990s. His career got off to a promising start, but was cut short as it coincided with that of Sri Lanka’s golden generation. He is now the coach of New South Wales. Shrikant Shankar looks back at his career. 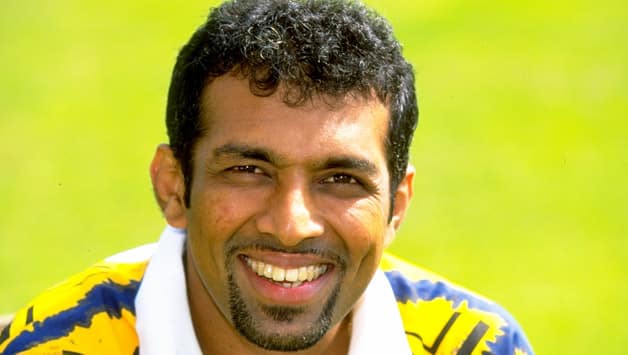 Chandika Hathurusingha, born September 13, 1968, was a Sri Lankan all-rounder in the 1990s. His career got off to a promising start, but was cut short as it coincided with that of Sri Lanka’s golden generation. He is now the coach of New South Wales. Shrikant Shankar looks back at his career.

Upul Chandika Hathurusingha was a right-handed batsman and a right-arm medium-fast bowler for Sri Lanka. He made his international debut for the island nation aged 23 in a Test match against New Zealand at Hamilton in February 1991. The Sri Lankan team back then had its fair share of talented players, but the team was still a work in progress. The likes of Asanka Gurusinha, Aravinda de Silva, Hashan Tillakaratne, Sanath Jayasuriya and Arjuna Ranatunga were part of the team in which Hathurusingha made his debut in. Again these aforementioned cricketers did not realise their dreams till at least a few years down the line.

Hathurusingha came in for an injured Roshan Mahanama at Hamilton. He came out to open the innings with Charith Senanayake as New Zealand had posted a total of 296. He only managed 45-ball 23. After the Kiwis had declared their second innings at 374 for six, Sri Lanka were set a target of 418 to win. As the pitch became easier to bat on, the Lankans seemed unperturbed by the daunting target and went about their business. Senanayake and Hathurusingha put up an opening stand worth 95 runs. Then after the second wicket went quickly, in came Gurusinha, who had already scored 119 in the first innings. The duo added 117 runs for the third wicket. Hathurusingha was on 81 when Shane Thomson got his wicket.

Gurusinha scored 102 and Sri Lanka finished at 344 for six and the match was drawn. Hathurusingha had impressed on his debut. As Mahanama was still out with injury, Hathurusingha played the third Test as well. He scored 13 in the first innings, but notched up a slow, but composed, 74 off 214 balls. The match again ended in a draw and the three-match series finished 0-0. Surely Hathurusingha had done enough to impress the selectors. He then played his third Test against England in the only Test at Lord’s in August 1991. Mark Ramprakash became his first wicket in international cricket. England were bundled out for 282. But Sri Lanka’s reply fell short as they were cleaned up for 224. Hathurusingha’s innings of 66 from 201 balls was some sort of saving grace for the Lankans. He could only manage 25 in the second innings as England won by 137 runs. Thus Hathurusingha scored three half-centuries in as many Test matches, all away from home. It was a promising start to his international career.

Hathurusingha was selected for Sri Lanka’s tour of Pakistan in 1992-93. He did not have a very productive series with the bat or with the ball. He only managed 93 runs in the three Tests and he had not taken a single wicket. Pakistan won the three-match series 1-0. Hathurusingha was then selected for the One-Day International (ODI) to play against Pakistan. His performances in the one-dayers were not up to the mark, but still he was persisted with throughout 1992.

His best performance with the ball in a Test came against Australia at the Sinhalese Sports Club (SSC) ground, Colombo in August 1992. He wiped out the entire middle-order with his medium-fast deliveries. He got the wickets of David Boon, Dean Jones, Allan Border and Steve Waugh. He finished with figures of four for 66. In the second innings, he only got Ian Healy’s number but Sri Lanka only needed 181 runs to win. They were bowled out for 164 and lost the match by 16 runs. In the second Test, Hathurusingha scored his fourth Test half-century. His 157-ball 67 was followed with a 126-ball 49 in the second innings. But his efforts could not force a result and the match was drawn. The third Test was also drawn and Australia won the series 1-0.

In the following ODI series, Hathurusingha scored his first half-century. Sri Lanka had won the first ODI by four wickets. In the second, Hathurusingha was selected and scored an unbeaten 52 to set up a five-wicket win and clinch the series. The third ODI was won by Australia, but Sri Lanka won the series 2-1. He was a regular member of the Sri Lankan team in the year 1993 as well. But a run of seven matches yielded only one half-century and six wickets. A series against South Africa in the Rainbow Nation was his undoing. He struggled against the likes of Allan Donald, Brett Schultz, Richard Snell and Brian McMillan. In the meantime, his performances were better off. He played 12 ODIs in 1993 and scored three half-centuries. He was then dropped from both the Sri Lankan Test and ODI teams.

Hathurusingha did not get a look in during the whole of 1994. By this time, the Sri Lankan team was becoming more competitive and was challenging the bigger teams on a more regular basis. Hathurusingha then made a comeback into the Sri Lankan team in 1995. He was selected for the tour of Pakistan in September 1995. The first Test was a forgettable one as Sri Lanka lost by an innings and 40 runs, despite Hathurusingha scoring a fighting 53 in the second innings. In the second Test, Hathurusingha showed his potential with the bat. Batting once more in a sedate fashion, he scored 47 runs and an 83. Sri Lanka won the match by 42 runs. Hathurusingha scored yet another half-century (73) as Sri Lanka won the third Test match by 144 runs. 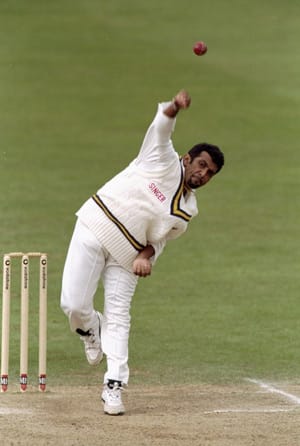 The run extended to Sri Lanka’s tour of Australia later in the year. Hathurusingha played all three Test matches against Australia. The third match in Adelaide proved to be his last for over three years. That match in January 1996 is when Jayasuriya truly announced himself as a Test batsman as he first scored a quick 48 and then followed it up with his first Test century as he scored 112. Hathurusingha, who opened with Jayasuriya, had scores of 28 and 14. Sri Lanka still lost the match by 148 runs.

This also resulted in Hathurusingha being left out of the Sri Lankan squad for the 1996 World Cup in the sub-continent. As everyone knows Sri Lanka went on to win the World Cup undefeated. The other players had realised their dreams. Hathurusingha found it increasingly difficult to get back into the side. But over the years Sri Lanka were unable to find a consistent all-rounder and Hathurusingha got his chance in 1999. He was selected in the Sri Lanka team for the Asian Test Championship. Hathurusingha, though, had to drop down the order as Sri Lanka’s top-order was set. He played against India in Colombo and then against Pakistan in Lahore. Both the matches were drawn and Hathurusingha’s final innings in Test cricket ended in a duck. He did not play the final against Pakistan in Dhaka, which Sri Lanka lost by an innings and 175 runs.

Hathurusingha was selected in Sri Lanka’s squad for the 1999 World Cup. But he did not play a single match as Sri Lanka bowed out of the tournament from the group stages. This also signaled the end of his ODI career. His last ODI was also against Pakistan. Again he was dismissed for a duck. He ended his ODI career with 669 runs in 35 matches at an average of 20.90. He scored four half-centuries and his highest was 66. He took 14 wickets at an average of 50.64 with a best of four for 57. In domestic cricket, Hathurusingha had a good career. He played for Moors Sports Club and Tamil Union Cricket and Athletic Club. He played 207 matches in First-Class cricket and scored 10,861 runs at an average of 36.44. He scored 20 centuries and 61 half-centuries with a highest score of 191. He also took 425 wickets at an average of 22.07. He had 12 five-wicket hauls and two 10-wicket hauls to his credit. His best bowling figures read eight for 29.

All in all, the international career began with a lot of promise, but failed to live up to expectations.

He soon took up to coaching. Hathurusingha was appointed the coach of the United Arab Emirates in December 2005. After one year he was made coach of the Sri Lanka A team on a three-year contract. In 2009, he became an assistant to then Sri Lankan national coach Trevor Bayliss. Hathurusingha faced disciplinary issues as he disobeyed orders from Sri Lanka Cricket (SLC). He was sacked in 2010. Later in the year he and his family immigrated to Australia. He was made assistant to Anthony Stuart in the New South Wales (NSW) setup. Once Stuart’s reign came to an end in December 2012, Hathurusingha was made the acting head coach. In between, he was also a coaching consultant for the Canadian cricket team at the 2011 ICC World Cup.

He was technical advisor to the Sydney Sixers as they went on to win the 2012 Champions League Twenty20 (CLT20) tournament. Hathurusingha was in April 2013 named as coach of the Sydney Thunder in the Big Bash League as well. His international cricketing career might not have been a highly fulfilling one, but he still has a lot to contribute as a coach. Chandika Hathurusingha is not finished.

CLT20 2013: Faisalabad Wolves players to get visas; PMO steps in