Chandu Borde made a name as a batsman but was also a useful leg-spinner.

Chandu Borde, born on July 21, 1934, was a batsman who played 55 Tests for India. Though he made a name as a batsman, he was also a useful leg-spinner, having bowled India to victory against England in 1961-62. He finished as one of India’s best batsman in the late 1960s and remained a respectable figure in Indian cricket. Nishad Pai Vaidya lists 10 facts about the former India batsman.

1.  Marathi Christian: Borde was born into a Marathi Christian family in Pune. He was a part of a large family comprising five sisters and five brothers. His younger brother Ramesh also represented Maharashtra in First-Class cricket.

2.  Baroda connections and Vijay Hazare’s influence: Though he made his First-Class debut for Maharashtra in the early 1950s, he moved to Baroda and built a successful career there for years. Borde looked up to Vijay Hazare and it was fitting that he made big strides in cricket in the great batsman’s city. He also had the good fortune of sharing the dressing room with Hazare. On Borde’s debut for Baroda in the Ranji Trophy, Hazare had scored a double ton to make the occasion even more special for the young man.

4.  West Indian challenge and missing out on two tons in a Test: As a debutant at the highest level, Borde faced the ultimate test when he made his debut against West Indies at Mumbai in 1958. West Indies had the bowlers of the calibre of Wes Hall, Sonny Ramadhin and the dangerous Roy Gilchrist. Borde failed in his first four Test innings, scoring only 20 runs and recording two blobs. He broke the streak with a second innings fifty in the Chennai Test. In the fifth Test at Delhi, he bounced back with an innings of 109 in the first essay, following it up with 96 in the second. He was unfortunate not to have completed a ton in the second innings as he was out hit wicket while hooking Roy Gilchrist. Had he not knocked the stumps off, he would have bagged four runs off that hook shot and achieved the milestone for the second time in the game.

5.  Shining as a leggie and partnering Salim Durani: The 1961-62 series saw Borde’s emergence as an all-rounder as his leg-spin played a huge role in India’s series victory over England. Speaking to this writer in an interview, Borde said, “I was a leg-spinner, but till Subhash Gupte was in the side, I didn’t get too many opportunities. It was only after he left the scene I was bowled more regularly.” In that five-match Test series, Borde took a total of 16 wickets and also managed three fifties, two of which came in the victory at Kolkata. India won that series 2-0. Along with Salim Durani, Borde had formed a good spin bowling pair and they were called the “spin-twins.” He scalped 52 wickets in his Test career with an innings best of five for 88.

6.  Helping hand in saving Nari Contractor’s life: In 1961-62, Nari Contractor was hit on the head by a Charlie Griffith bouncer during a tour game in the Caribbean. Borde was one of the first to rush to the scene and help Contractor off the ground. He was also one of the players who donated blood for Contractor. Although Borde was a senior figure, he wasn’t named captain and a young Mansur Ali Khan Pataudi was handed the responsibility.

7.  Losing a bat after victory:During the second Test against Australia at the Brabourne Stadium, Mumbai in 1964, Borde batted India to victory in a tense run-chase on the final day. Chasing 254, India were reduced to 215 for seven when Borde walked out to bat. He hit an unbeaten 30 to take India to victory with two wickets to spare. In the aftermath of the victory, the crowd hoisted Borde to celebrate. “They [crowd] took my bat away. I never got it back. It was a brand new bat,” he recalled in an interview with ESPNcricinfo.

8.  Only Test as captain: Borde’s only opportunity to lead India came against Australia at Adelaide in 1967-68. He marked the occasion by scoring 69 in the first essay. Pataudi’s absence allowed Borde to lead India in this game. The designated Indian captain returned for the next Test in Melbourne and scored those two remarkable fifties — withone good eye and one leg — against the rampaging Graham McKenzie.

9.  Selector: Post retirement, Borde continued to maintain his connections with the sport. He served as an India selector on more than an occasion. During his first tenure as selector in the mid 1980s, India won the 1983 World Cup and the World Championship of Cricket Down Under. In an interview to Rediff in 1999, he claimed that his selection of a young Mohammad Azharuddin was his finest hour in the job.

10.  Managing India on notable assignments: Borde has also served as a manager of the Indian team. In 1989, he was the helm on the visit to Pakistan that saw the arrival of the 16-year-old Sachin Tendulkar. In a chat with CricketCountry, Borde said, “It was sometimes difficult to get him [Tendulkar] off the ground when we used to have net practice. So the ground staff used to come and say that they had to get the wickets ready and ask me to get the boys off the field. He wouldn’t like to leave the ground.” Years later, Borde managed the Indian team on the tour to England in 2007, where Rahul Dravid’s men won the Test series 1-0. Tendulkar was an integral part of that unit as well. 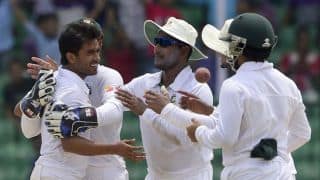