Marriott remains the only man to play a single Test and take two five-fors.

Charles Marriott, born September 14, 1895, nicknamed “Father,” was an outstanding leg-spinner who served Kent almost exclusively for over a decade. Abhishek Mukherjee looks at perhaps the most successful and unfortunate one-Test wonder.

Few people have maintained a sub-five batting average over a career spanning close to two decades, but Charles Stowell “Father” Marriott had managed exactly that. What was more, he never managed to reach 25 in his First-Class career. He finished with 574 runs at 4.41 — significantly less than his tally of 711 wickets.

However, the 711 wickets, most of which went for Kent, came at an astonishing 20.11 which were for Kent. He managed 48 five-fors and 10 ten-fors, and dominated Kent cricket in tandem with Tich Freeman (3,776 wickets at 18.42) between the World Wars. Seldom has a combination been as lethal.

Keeping up with someone of Freeman’s stature was not an easy job, but Marriott carved out a niche of his own. He was a huge turner of the ball, and his ability to turn the ball on any surface was a huge advantage for Kent. This was slightly unusual for a bowler with a high-arm action. Wisden wrote that his action “was high with a free, loose arm which he swung behind his back before delivery in a manner reminiscent of Colin Blythe.”

He did not bowl the googly very often, and there was a reason for that. Gideon Haigh quoted Marriott in his biography of Jack Iverson. “One day at the net I had an astonishing spell, when I struck a perfect length and had everyone completely tied up including our professional, who took a turn with the bat for the last minute or two. It went to my head. When it was time to pack up, I shouted ‘one more’ and ran up determined to bowl the googly to end all googlies. What actually happened was a horrible stab of pain in my right elbow, and I found myself out of the XI for the next three matches.”

The incident took place when Marriott was at school in Ireland. As Haigh mentioned, “Marriott scarcely bowled it [the googly] again. If he did, he bowled one in his first or second over, with the idea that the threat was enough. He considered that the injury ‘saved me just in time’ and that he ‘never felt it was worth the extra effort.’

With a toothbrush moustache to match Charlie Chaplin’s, Marriott was a popular figure among his colleagues. Exactly how he acquired the nickname “Father” is not very clear, but it may have to do with the fact that there was an Anglican Priest of the same name in the 19th century who played a crucial role in the Oxford Movement.

Born in Heaton Moor, Lancashire, Marriott was registered as Charlie (not Charles) Stowell Marriott. He went to St Columba’s, Ireland (where the “googly accident” happened) for his schooling. His early years were taken away by World War I, and it was not before 23 that he made his First-Class debut for Gentlemen of England against Oxford. He clean bowled 4 batsmen for 56 in the first innings.

He made his County Championship debut for Lancashire the following season, and started with 5 for 52 against Essex. He achieved his his career-best against Nottinghamshire the same season, with 8 for 98; 6 of these batsmen were bowled.

He went to Cambridge next season and earned the Blues in 1920 and 1921. In his second match for them, against Royal Navy, he impressed with 5 for 42 and 4 for 39, but the big success came in the Varsity match later that season. Playing at Lord’s, Marriott ran through Oxford with 7 for 69 (once again, 4 men were bowled).

In 1924 he got a job as the “master-in-charge of cricket” at Dulwich College, which meant that he moved to Kent and played for them for the rest of his career. He also won his Kent cap that season. The Freeman-Marriott combination that would dominate County Championship for over a decade took off. Their performances in the English summers were nothing short of exemplary.

As is evident, while Freeman (arguably the greatest bowler in history of the County Championship) took a substantially greater number of wickets, Marriott’s average was comparable.

Let us not forget that Marriott also had to compete with the small matter of Frank Woolley, who finished with 2,066 First-Class wickets at 19.87. However, Woolley’s bowling was on the wane in the second half of the 1920s, which paved the way for Marriott to assume the role of the second spinner in the side.

When New Zealand toured England in the summer of 1931, he single-handedly ran through them with 5 for 102 and 7 for 58. Kent won the match by 9 wickets. Against the Indians next season he triggered another victory in tandem with Freeman. The second innings performance was spectacular, where Freeman (6 for 69) and Marriott (3 for 48), defending 180, bowled out the tourists for 121.

The next season saw the West Indians tour England, and after England won comfortably against West Indies at Lord’s and drew the second Test at Old Trafford, they rested Hedley Verity to bring in Marriott. He was a shade above a month short of his 38th birthday.

Bob Wyatt, leading in the absence of Douglas Jardine, decided to bat. A hundred from Fred Bakewell and a 95-run eighth-wicket partnership between debutant Charlie Barnett and Stan Nichols saw England reach 321 despite Manny Martindale’s five-wicket haul. Marriott batted at 11, and duly scored a duck before Martindale clean bowled him.

Then it happened. While “Nobby” Clark and Nichols provided with a few wickets, it was Marriott who did the most damage. The West Indians were clueless against leg-spin of his quality, and were bowled out for a round 100. Marriott finished with 5 for 37. Wisden wrote that he “disguised his spin very well and never made the ball break too much”.

The tourists put up a slightly better performance in the second innings, but collapsed to 195 after being 113 for 2. Once again Marriott was the wrecker-in-chief: he went one step further and finished with 6 for 59. Wisden added that Marriott “made the most of his opportunity and by clever fighting of the ball, perfect length and spin.”

In the process Marriott became the second spinner (after Clarrie Grimmett) to take 2 five-wicket hauls on Test debut. Narendra Hirwani is the only other one till date, and interestingly, all three are leg-spinners.

Marriott never played another Test. He remains the only man to play a single Test and take 2 five-fors. His 11 for 96 is also the best match haul for anybody who has played a single Test (excluding active cricketers, Gobo Ashley comes a distant second with 7 for 95).

Marriott’s efforts did not go in vain — at least temporarily. He earned a spot in MCC’s tour of India and Ceylon that season. He did not play in any of the ‘Tests’, but made the most of his opportunities. He finished with 32 wickets at 20.91, which included 6 for 35 against Central Provinces and Berar.

The best effort, however, came against Madras. MCC scored a humongous 603 before Clark, Marriott, and Les Townsend took 3 wickets apiece to bowl out the hosts for 106. Following on, Madras were skittled for 145. This time Marriott, with 5 for 43, had a bigger role to play. He also picked up the only hat-trick of his career when he got Ram Singh (stumped), Ren Nailer (bowled), and MA Uttappa (bowled).

Marriott played for Kent till 1937, his appearances turning more and more sporadic with time on the wrong side of 40. After his Kent days, he played a solitary match for Free Foresters against Oxford. The 42-year old bowed out with 4 for 61 and 5 for 40, turning an 80-run deficit into a 5-wicket victory.

When World War II started, Marriott, then 45, was recruited as an anti-aircraft gunner in the Home Guard. He passed away at Dollis Hill, Middlesex on October 13, 1966 — a month after his 71st birthday. 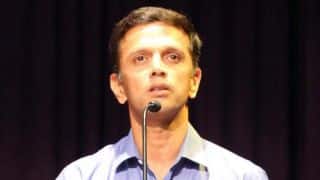