Whether Charles Kortright was quicker than Harold Larwood remains a matter of debate.

The relative speed of fast bowlers across the ages is always a matter of great interest to cricket lovers. However, asking the old fast bowlers is not always the best idea. Arunabha Sengupta recounts the response of fiery old Essex fast bowler Charles Kortright, dated November 25, 1946, when asked about his pace.

When he passed away in 1952, Charles Kortright was described by Wisden as “probably the fastest bowler in the history of the game”. A lot of old-timers agreed. By then the world had already seen the likes of Harold Larwood and Ray Lindwall.

According to Sir Stanley Jackson, Charles Kortright was not only the fastest bowler of his times, but a very good one. He played between 1889 and 1907, and many a tall feat is associated with his name. John Arlott called him one of the greatest players never to appear in a Test match.

William Gunn of Nottinghamshire, one of the greatest batsmen of the era, was bowled by a Kortright delivery during a Gentleman versus Players game. He confessed that the ball had been a yard faster than anything he had ever faced. A ball in a club match at Wallingford supposedly rose straight from the wicket and went to the boundary on the full – making him perhaps the only bowler to bowl six byes. The claim, however, is perhaps a bit farfetched. Rules would have kept it down to four.

There is another claim that when he bowled Bill Brockwell of Surrey with a yorker, the ball rebounded from the bottom of the stumps and went back past the bowler almost to the boundary. And Kortright was vicious as well when his pace was slighted. Playing an army side he was once annoyed when he saw one of the officers facing him with a raised left toe. Kortright explained to the offender that he allowed no one but WG himself to cock his toe at him. When the batsman continued to face him the same way, Kortright blitzed the offending foot with yorkers until he caught it with a direct hit and broke it.

The fire in personality did not mellow with age. In 1946, the 75-year-old Kortright received a letter from cricket writer James D Coldham which enquired about his assessment of his own pace. Kortright’s short and immensely colourful response is given below:

I am very pleased you take such an interest in the grand old game of cricket, especially during the period I was taking more or less active part in it — 1890-1906. The question (personal) you ask me is an impossible one for me to answer as I have never played my own bowling, and after having been relegated to the long list of have-beens and forgotten for about 30 years, I was only dug up by a few ignorant so-called cricket reporters as a means of comparison with the pace of Harold Larwood, the Notts and England fast bowler in the Douglas Jardine expedition, when Australia got some of their own medicine and couldn’t stomach it. The best way to compare the pace of any bowler with another is to bat against both of them in my opinion which in most cases is impossible.

His delivery was as brisk and sharp as ever. 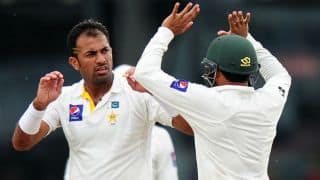 Pakistan delay announcement of squad for 1st Test against Australia 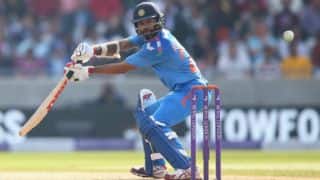