Both the teams will look to register their first win.

Chennai Super Kings (CSK) and Dolphins clash in the eight match of the ongoing Champions League Twenty20 (CLT20) 2014. Both teams will be looking to registering their first win of the tournament so far after having lost their opening games to Kolkata Knight Riders (KKR) and Perth Scorchers respectively. Amit Banerjee takes a look at some of the interesting contests that are expected to take place during the course of the match.

Brendon McCullum vs Kyle Abbott: While the South African bowler Kyle Abbott was consistent and comparatively economical against Perth Scorchers in their first game, Brendon McCullum will be tasked on taking on the bowlers right from the word ‘go’. What remains to be seen is who gets the better of the other eventually.

Suresh Raina vs Craig Alexander: Suresh Raina came into the tournament after consistent performances against England in the One-Day International (ODI) series. Though he has had a quiet start in the opener vs KKR, he will be relied on to anchor the innings after the fall of the first wicket. Craig Alexander will be targeting Raina with a few short-pitched deliveries, which the Indian batsman has expressed discomfort against in the past.

Khayelihle Zondo vs Ashish Nehra: Both Zondo and Ashish Nehra were clinical in their previous matches in losing efforts. Zondo scored a fluent, unbeaten 63 from 50 balls, while Nehra ripped through the KKR top order and ended with remarkable figures of four for 21. A mouth-watering contest can be expected between the two should they come face to face.

Ravindra Jadeja vs Robert Frylinck: The battle of the all-rounders in either sides. While Ravindra Jadeja is a well-known name in the Indian Premier League (IPL) and a CSK stalwart, Robert Frylinck displayed all-round abilities in the encounter against Perth. Not only did his late-hitting come in handy, he was also quite consistent with the ball until the final two deliveries of the match.

MS Dhoni vs Morne van Wyk: The battle of the leaders. While MS Dhoni’s tactics and cool-mind has helped his team wriggle out of the toughest of situations, Morne van Wyk is an established leader after leading the Dolphins to a victory in this year’s edition of the Ram Slam tournament. Both leaders will try and outwit each other in order to get the much needed  points and avoid elimination. 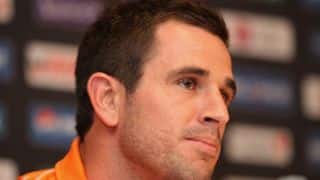