Shiamak Unwalla talks about the likely XI that CSK could field against the Scorchers.

In a must-win game, Chennai Super Kings (CSK) take on the Perth Scorchers in the 15th match of the Champions League T20 (CLT20) 2014 at Bangalore. CSK lost their first encounter against Kolkata Knight Riders (KKR) before steamrolling the Dolphins. Unfortunately, their last match against Lahore Lions was washed out without a toss and they had to share point, which put CSK in an unenviable position. They must now beat Perth and hope for other results to go in their favour. Shiamak Unwalla talks about the likely XI that CSK could field against the Scorchers.

Top order: When the top three batsmen of a line-up are Dwayne Smith, Brendon McCullum and Suresh Raina, big totals are almost a given. All three batsmen are explosive, and can change a game in mere overs. Raina especially has been in tremendous form in recent times. His 43-ball 90 against Dolphins was one of the most brutal knocks so far in CLT20 2014. McCullum’s innings was vital as it got CSK the momentum it needed to get to a 240-plus total.

Middle order: Faf du Plessis, Dwayne Bravo, MS Dhoni and Ravindra Jadeja complete the much-feared batting order for CSK. While du Plessis is a stable influence, he too can bring out the big hits at will. Given the form he has been in, one can expect a few fireworks from him as well. Bravo is known for his Caribbean flair with the bat, and he has showcased the ability to hit fours and sixes whenever the ball is in his arc. Dhoni suffered a rare failure with the bat against Dolphins, but the fact that CSK got to 242 even though he was dismissed first ball speaks volumes of the depth in CSK. Jadeja was absolutely outstanding, thrashing 23 off the first five balls he faced.

Bowling attack: With Ravichandran Ashwin and Jadeja leading the way in the spin department and Suresh Raina as backup, it seems unlikely that the services of either Pawan Negi or Samuel Badree will be called upon. Ishwar Pandey played the last match, but did not bowl, with Dwayne Bravo performing the role of an extra bowler admirably. Despite that, Pandey is likely to keep his place. Ashish Nehra and Mohit Sharma were expensive against Dolphins, but both men took crucial wickets as well. All in all, it is unlikely that CSK will make any changes from the side that trounced Dolphins.

(Shiamak Unwalla is a reporter with CricketCountry. He is a self-confessed Sci-Fi geek and Cricket fanatic who likes to pass his free time by reading books, watching TV shows, and eating food; sometimes all at the same time. You can follow him on Twitter at @ShiamakUnwalla) 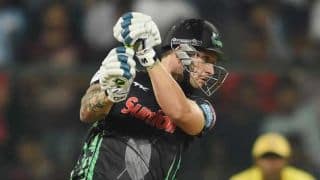