Ever since Chennai Super Kings‘ ban got lifted, there has been so much emotion attached to their IPL comeback. The Whistle Podu team enjoys the emotions of the fans, as evident from Chepauk having a full house during CSK’s practice games. The Yellow Brigade will fill up the stands, and we may even seen a familiar face in Sivamani India’s leading percussionist whose collaboration with the franchise was highly successful in the initial editions. Indeed, the stage is set for CSK’s roaring comeback, that too against their fierce rivals, Mumbai Indians, in the tournament-opener on April 7 at Wankhede Stadium.

The CSK owners didn’t disappoint their fans in January’s auction. They retained Dhoni, Raina, Jadeja, Bravo and Faf du Plessis, giving it a near-reunion sort of feeling. In other words, they continued doing what they do best: keeping it simple by bringing back their core. The familiar faces will help CSK to start off on a good note. Their core remains their biggest asset, but are they, like Mumbai, too heavily-reliant on them to perform?

As mentioned, CSK’s strength lies in their core players. They would again want to lead from the front and guide the newcomers. For them to perform from the word go they need the big man Raina to be in good form. The CSK batting has always revolves around Raina, whom they will look up to yet again. Raina has been impressive in his recent international comeback, and will want to move in the same stead in his favourite yellow jersey.

Another advantage CSK has always enjoyed is an excellent reserve bench. If Bravo’s workload increases, they can always fall back upon Shane Watson. Watson has been in ominous touch of late. He was in the top five run-getters list in BBL 2017-18 at an average of 36.77.

In addition, if something happens to Dhoni, they have wicketkeeping options in Ambati Rayudu, Kedar Jadhav and Sam Billings. To keep Jadeja on his toes, they have Harbhajan Singh, Imran Tahir and Karn Sharma. They have four openers in du Plessis, Murali Vijay, Sam Billings and Watson. They can rely on Rayudu to reprise Subramaniam Badrinath’s role in the team. They also have two excellent overseas pacers in Lungi Ngidi and Mark Wood, who can be used as per conditions.

It is not clear why the team management has not bolstered their home-grown seam attack during this season’s auction. The pace attack looks weak if we take out Bravo. They needed another big name alongside Shardul Thakur and Deepak Chahar. They may be tempted to play both Ngidi and Wood a T20 specialist but that could hamper the team combination.

One more thing that can spoil their run can be overreliance on spin. We all know that Dhoni loves to play with spin, and has enough options in this front. Nonetheless, the ploy may backfire on venues outside Chepauk. Also, their tried-and-tested formula will be the first thing to pop up in their opponents’ mind.

The biggest opportunity for CSK, as a whole, is to fight for the coveted trophy and regain the lost throne. After the two-year hiatus, CSK fans also had to deal with the fact that their biggest rivals, Mumbai Indians, are now the most successful side in the tournament history. Will CSK’s arrival change the script to some extend?

The immense pressure and anticipation surrounding the camp has already put them at the center stage. With Dhoni as the leader of the pack, CSK won’t be much concerned about the task of maintaining their glorious run and the pressure it generates. But will they counter the tag of ‘heavyweights’ as a unit?

CSK start the tournament by locking horns with Mumbai Indians. They enjoy a good four-day break in a row after their first home game versus Kolkata Knight Riders. Things heat up by April end when they play 7 games in a span of 16 days. Dhoni and co. will plan it out beforehand to avoid fatigue.

CSK are well versed the art of winning. It can be evident from their performance in the eight editions they have featured in:

CSK have reached the playoffs in every single edition they have played in. Dhoni’s identity reached new heights with the success of CSK. Following the two-year ban, he would be hell bent on redefining the status of the franchise, and look to start afresh. Let the Whistle Podu begin…. 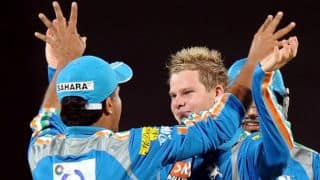