Distraught Indian cricket fans can look forward to brighter days for their team, both literally and figuratively. Pushed to a corner by the national squad’s defeat to old foe Pakistan in the first One-Day International (ODI), Board of Control for Cricket in India (BCCI) President N. Srinivasan announced that the Chennai Super Kings (CSK) would take on Pakistan in the two remaining ODIs. 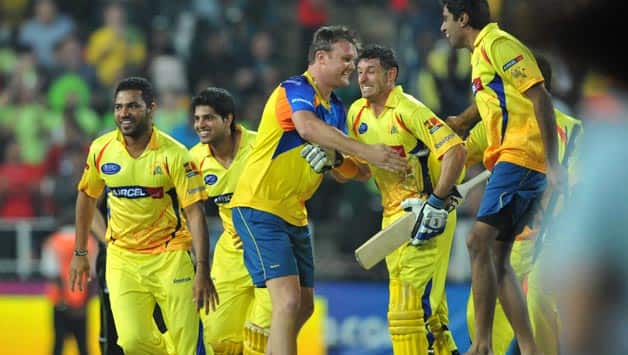 By The Ultimate CSK Fan

Distraught Indian cricket fans can look forward to brighter days for their team, both literally and figuratively. Pushed to a corner by the national squad’s defeat to old foe Pakistan in the first One-Day International (ODI), Board of Control for Cricket in India (BCCI) President N. Srinivasan announced that the Chennai Super Kings (CSK) would take on Pakistan in the two remaining ODIs. “It was the only option, paa,” explained Srinivasan, “we are usually very smug about the team performing badly, whether it is a 4-0 whitewash abroad or a 2-1 defeat at home, but even we feel discomfited about the repercussions of India losReing to Pakistan. So we’ve decided to make it a CSK-Pakistan series instead.”

Srinivasan said he spoke to the BCCI President (his alter ego) and convinced him of the merits of fielding CSK in place of Team India. “Both the BCCI President and I, in my capacity as CSK’s owner, agreed that such a course of action would be in the best interests of Indian cricket, paa,” he informed, in what is yet another testament to his legendary skill in papering over conflicts of interest.

The batting firepower of Ravichandran Ashwin, MS Dhoni, Suresh Raina, Dwayne Bravo, and Michael Hussey is expected to demolish the Pakistani bowling attack, while the CSK tradition of using foreign pacers like Ben Hilfenhaus, Albie Morkel and Doug Bollinger is sure to rip apart the fragile Pakistani batting line-up. Harsha Bhogle has stressed that adjusting to the ODI format will not be a problem for the CSK as having played real cricket in the IPL is  sufficient practice for handling the lest testing ODI format.

Team unity is also at an all time high, considering Dhoni enjoys a better rapport with members of his IPL franchise, irrespective of their nationality, than with some players from the national squad, especially those hailing from the national capital. Politicos have hailed the move, describing it as a win-win proposition. “If Pakistan loses, the whole of India will rejoice. If CSK loses, the neighboring states of Tamil Nadu will have something to cheer about,” observed a political expert.

However the decision had not gone down well with some of the cricketers. Gautam Gambhir and Virender Sehwag have claimed that it was only natural that CSK lads performed on the funny Chennai pitch. Gambhir had insisted on leading Kolkata Knight Riders (KKR) against Pakistan at the Eden Gardens. The matter was resolved when Shah Rukh Khan said it’s more prudent to induct Pakistani players into KKR and focus on defending next year’s IPL rather than getting entangled in the petty Indo-Pak rivalry.

The news of playing CSK rather than Team India has led to morale plummeting in the Pakistani camp. “Yaar, we aren’t even sure whether Chennai is part of India. Now where is the joy in beating them? Even playing against Sri Lanka would be less boring,” whined Pakistan skipper, Misbah-ul-Haq, who failed to cheer up even after being told that the CSK squad includes Ravindra Jadeja.

In a piece of unrelated news, Ishant Sharma was honoured with a Fairplay Award for resolving all the sight-screen issues, by allowing the batsmen to use his own mane as a gigantic sightscreen. Rohit Sharma was also honoured by the Mumbai Cricket Assocaition for fully full justififying his talent by registering the princely score of five, his highest in his previous six outings.

(The Ultimate CSK Fan is a satirst with the http://www.theunrealtimes.com/ from where the above article has been sourced with permission)