Chennai Super Kings (CSK) put in a ruthless performance to get the better of Kings XI Punjab (KXIP) at the Champions League T20 (CLT20) semi-final at Hyderabad. MS Dhoni’s men romped home to a 65-run victory and ensured qualification into the final. Nishad Pai Vaidya picks some of the highlights of the day.

Kings XI Punjab’s opening spell: Anureet Singh and Parvinder Awana started off very well for KXIP. Up against the dangerous pair of Brendon McCullum and Dwayne Smith, the bowlers varied their lengths quite well and kept a check on the scoring rate. They had the batsmen guessing on length and that outfoxed Dwayne Smith. Awana then got the better of Suresh Raina with a short mid-wicket in place. That was a very promising start for Punjab.

Dwayne Bravo let-off: Dwayne Bravo was on eight in the 11th over when Glenn Maxwell let one go through his hands at long-off. Three overs later, Akshar Patel let one go off his own bowling when Bravo was on 30. And, ultimately, Bravo’s innings was the difference between the two sides. His innings of 67 took Chennai to 182 for seven.

Pawan Negi walks in at No 6: Pawan Negi was brought in place of Mithun Manhas. The southpaw was mainly in for his bowling in the Delhi Daredevils, but he was thrown into the deep in this game. Negi swept the first ball he faced for a six to vindicate the faith of his captain and coach.

Parvinder Awana’s hat-trick: No one noticed that Awana had taken a hat-trick. He had dismissed Suresh Raina off the last ball of his first spell. And then, when he returned in the slog overs, he bowled Negi and then dismissed MS Dhoni. It took a while before everyone realized he had a hat-trick.

Brendon McCullum’s catch to dismiss Virender Sehwag: The New Zealand skipper made it look simple, but it was far from it. McCullum watched the ball, line himself up and dived low to his left to collect the ball very well. It would have made any wicketkeeper proud. McCullum did that at point and helped get rid of Virender Sehwag.

Ashish Nehra’s double blows: Ashish Nehra has been very consistent in the CLT20 2014. Wriddhiman Saha was bowled by one as he played across the line. And then, Glenn Maxwell was dismissed for a duck when he gloved one down the leg-side.

Pawan Negi strikes twice in eighth over: Negi had an even better time in the field. Off his first ball, he dismissed George Bailey. And then later in the over, Thisara Perera holed out to the deep at mid-wicket. At 34 for six, Punjab’s hopes were gone. 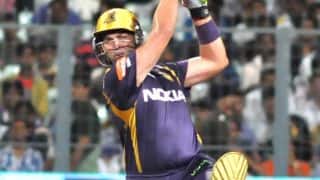