Chennai Super Kings stayed alive in the Champions League T20 (CLT20) 2014 by beating Perth Scorchers by 13 runs. Perth will now head home after their last league game as they have been knocked out. They dominated for a while, before Chennai took control of the game. Nishad Pai Vaidya picks the highlights of the game.

Chennai’s early jolt: Brendon McCullum seemed to be in the zone on his birthday. He charged down the track in the first over and smashed a six. However, he was bowled in the third-over and Suresh Raina was run-out soon after. To make it worse, Dwayne Smith was bowled in the sixth over as Chennai lost three within the powerplay. From there on, it was left to Dwayne Bravo and Mithun Manhas to fight it out.

Brad Hogg and Michael Beer keep it tight: The Perth spinners have to be given credit for the way they bowled. Beer in particular was fantastic as he conceded only 16 runs in his four overs. He kept it very tight and hit the right areas very consistently to keep Perth on top. Brad Hogg too did his bit with only 25 off his four overs. He also took one wicket, that off Manhas. In tandem, they gave away only 41 runs in their eight overs.

MS Dhoni and Ravindra Jadeja turn it on: At 82 for five in 15 overs, Perth were dominating Chennai. But then Jadeja and Dhoni turned it on and helped take Chennai to 155 for six. In the last five, they were able to smash 83. The shots that stood out came off MS Dhoni’s bat. He smashed one ball from Yasir Arafat out of the ground and it was a testament to the man’s power. This is where the game changed for them.

Ashish Nehra bowls consistently: Ashish Nehra bowled very well to finish with figures of two for 27 in his four overs. In his first over, he was taken for 12 runs, but he then came back well to dismiss Craig Simmons. He has been hitting the right channels and is varying his lengths very well. This has given Chennai a very good option at the beginning of the innings. He then came back to finish things off well.

Chennai spinners dominate: Ravichandran Ashwin and Jadeja gave away only 46 runs in their eight overs. Ashwin picked up three wickets and broke the momentum by picking up crucial wickets. With the match in the balance, he dismissed the dangerous Mitchell Marsh, who was given a life earlier when he was out off a no-ball. 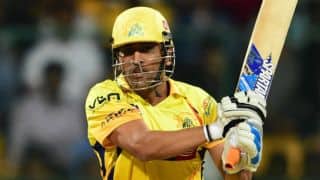