Cheteshwar Pujara was one of the unsung heroes of India’s victory at Lord’s earlier this year.

Cheteshwar Pujara had a tough time on the tour of England. With the Indian team heading Down Under, Pujara faces an important test. Facing Mitchell Johnson and co. and emerging successful would be a huge confidence boost for India’s No. 3, writes Nishad Pai Vaidya.

Cheteshwar Pujara was one of the unsung heroes of India’s victory at Lord’s earlier this year. Though his contributions didn’t stand out in magnitude, his impact was invaluable. Bringing his technique and discipline into play, he battled the tough conditions during the first innings for a hard fought innings of 28. In the second essay, his 43 was crucial in building a platform for a good score. Up until then, he had amassed 164 runs in two Tests with the promise of a lot more. His career average stood at an impressive 56.69. However, what followed was a nightmare!

In the next three Tests, where India slipped rapidly, Pujara mustered only 58 runs. His career average plummeted to 49.26 — still a good number, but not up to his high standards. Watching a technically sound, disciplined batsman of Pujara’s calibre fail was very surprising. When the tour began, he was meant to succeed. In the Rahul Dravid mould, Pujara was supposed to emulate his predecessor at No. 3. The failures were a rude awakening, a phase that may have pushed him towards introspection. Moving into county cricket, Pujara managed a couple of good scores to blood confidence.

A few months down the line, Pujara is on the cusp of another overseas tour, carrying the mantle of the Indian batting with Virat Kohli. At No. 3, Pujara has to produce innings of substance against an inspired Australian bowling attack. His experience in South Africa would hold him in good stead. In 2013, he dealt with the pace and bounce very well and counterattacked with some breathtaking strokes. That strategy would work well for him in Australia as he prepares for a gruelling summer ahead.

Pujara is India’s rock at No. 3 and it is important for him to have a good series. India need him to put those failures in England behind him and produce his best. In the long run, he is India’s best hope in the classical format. He is a man who can hold the innings together and produce remarkable consistency. For that, he needs a good confidence building tour in Australia. Facing the likes of Mitchell Johnson, Peter Siddle and Ryan Harris in their own backyard, and to produce good performances, would only increase a batsman’s stature.

Before every Test series, Pujara has been looked upon as India’s talisman, given the solidity he provides. One failure in England has not entirely shattered that belief, but has only brought one back to ground for he is human after all. Failures are a part and parcel of a player’s cricketing career; Dravid struggled in Australia, barring one tour, whereas VVS Laxman had a tough time in England. Pujara will take that in his stride as he prepares for this tour. He has endured two sub-par overseas tours, which makes this one all the more crucial.

As India begin their campaign with a couple of warm-ups, Pujara has the opportunity to settle into the conditions. It is imperative for India’s cause that he has a good outing. 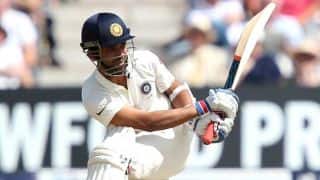