It can thus, be safely said, that Pujara was to India s batting what Ravichandran Ashwin, the Man-of-the-Series, was to India s bowling. And yet, he has not grabbed any spotlight.

On expected lines, Team India conquered Indore and clean-sweeped the hapless New Zealand team in the three-match series. The talking points of Indore win were skipper Virat Kohli s double hundred, vice-captain Ajinkya Rahane s 188, duo s mammoth fourth-wicket partnership and last but by no means the least, Ravichandran Ashwin s 13 wickets in the game. The Kiwis simply had no answer to the class of Ashwin, and once the off-spinner got his rhythm going, there was no stopping him. However, there was one more man, who went about his business with usual nonchalance and as always, remained in the background Cheteshwar Pujara. LIVE CRICKET SCORECARD: India vs New Zealand, 3rd Test.

It is not easy being Pujara, for he has always been a subject of intense scrutiny. In this age of flamboyance, where the T20 generation of players gets all the spotlight and appreciation from the fans, Pujara is a loner. He has been burdened with unnecessary expectations in the only format he plays. His position in the team too is constantly under threat with the more stylish Rohit Sharma getting precedence over him at times. Not long back, only a year ago, he was not a regular starter in the playing XI. The new Test skipper then, Kohli, preferred an aggressive Rohit at No. 3 ahead of him.

When injuries to regular openers opened the doors of opportunity for him, Pujara the makeshift opener in the third and final Test in Sri Lanka became only the fourth Indian to carry his bat through the innings. This was where he scored the epic 145 not out, with the second-best effort in India s innings by a proper batsman was 26. His knock eventually proved to be a match-winning one, earning him the Man-of-the-Match award and helping India clinch the three-match series 2-1. All the same, did that win him the team management s faith forever? No.

Let s go back a bit once again, in very recent times. India were touring West Indies for a four-match series. Pujara scored 67-ball 16 in the only innings of the first Test at Antigua. In the next Test at Jamaica, Pujara scored 159-ball 46. These are not unusual scores when you talk about Test cricket. But with Pujara, as said before, the man who is always a subject of scrutiny, this was bound to become an issue. All of a sudden the strike rate came into the picture. There was a time when it was never even discussed in Test cricket. But here we were, with Pujara, quite unfortunately, in the middle of things.

He was dropped from the next Test, and once again the flashy Rohit was preferred over him. But Pujara has never been perturbed by his axing. He has always taken it in his stride, worked hard and returned back stronger.

Last year, when he was not being picked in the regular XI, his idol and India legend Rahul Dravid had some comforting words for him. I do not think there is anything too wrong with Pujara s game. Happens when you are playing international cricket, that there are times when there is going to be a bit of ebb and flow, sometimes when runs do not necessarily come. Dravid, the India A coach, had said on the sidelines of a match between India A and Australia A last year. Pujara, who had captained India A in that game, had scored 55 and 42.

The runs do come when you keep following the routine religiously. So focussed Pujara is during his time out of the playing XI that he follows the same routine even as the team s waterboy. He stays positive and goes on with his routine with utmost dedication and discipline. This time, too, the runs came. In the Duleep Trophy, which was played just ahead of the India-New Zealand series, he scored 453 runs from three innings at a strike rate touching 67. His scores in the three innings read 166, 31 and 256 not out, giving enough signs of the red-hot form he was in ahead of a long home season.

Team India s head coach Anil Kumble was quick to acknowledge the importance of having Pujara in the side before the start of the series. “Pujara is a very important cog in our wheel and when he plays at No. 3. He is a very important player. Yes, there are times when he misses out and Rohit comes in. That is when we probably feel we need someone lower down to accelerate. That is why in one of the Tests in West Indies, he missed out, said Kumble in conversation with ESPNCricinfo.

The coach further went on to add that it is unfortunate on Pujara s part to be constantly scrutinised. Pujara, yes, the sword is always hanging on his head, which is not good. I certainly believe he is a very important player for us, and he will play at No. 3. And for us to be successful, he is important in the short as well as long term,” Kumble added.

Bringing his coach s words true, Pujara was phenomenal in the recently concluded series. In the three matches he played, his scores read: 62 and 78 at Kanpur, 87 and 4 at Kolkata and 41 and 101* not out at Indore. The last of those innings, a well-deserved hundred that came after quite a few starts, came in just 148 balls at a strike rate over 68. Ahem!

Not only this, Pujara finished the series as the highest run-scorer for Team India. He accumulated 373 runs in the six innings with 3 fifties and a hundred at an average of 74.60 and strike rate over 50.

It can, thus, be safely said, that he was to India s batting what Ashwin, the Man of the Series, was to India s bowling. And yet, he has not grabbed any spotlight. He has been that unsung hero for Team India always and has acted as a silent guardian for the team in the troubled times. In all likelihood, he will continue to do so. What, however, must not continue is the undue pressure and the scrutiny that he has to go through every time. 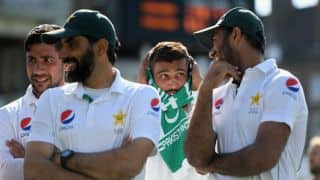