6 Tests since India took a first-innings lead against Australia in a Test. The last time they did this was at Delhi in 2012-13, when they scored 272 after bowling out Australia for 262.

1st visiting team to have 100-run partnerships for 5th-wicket stand in each innings of a Test Australia. Steve Smith and Glenn Maxwell added 191 for the 5th wicket in first innings and Shaun Marsh and Peter Handscomb collected 124 in the second innings. This was the 2nd instance in Australian cricket history, and both came against India. The first incident took place in 1977-78 at Perth. FULL CRICKET SCORECARD: India vs Australia, 3rd Test, Ranchi

6 Tests since India took a first-innings lead against Australia in a Test. The last time they did this was at Delhi in 2012-13, when they scored 272 after bowling out Australia for 262.

3rd double-century for Pujara and 2nd against Australia. VVS Laxman and Sachin Tendulkar are the other Indians with 2 double-hundreds against Australia. This was also Pujara s 11th First-Class double century the joint-most by an Indian batsman along with Vijay Merchant.

525 balls faced by Pujara in India’s first innings of batting the most by any Indian batsman in an innings. Pujara went past Rahul Dravid (495 against Pakistan in 2003-04).

2008-09 the time when a visiting team managed to draw the Test despite conceding 150-plus lead in the first innings in India. This was done by England at Mohali.

6 times Pujara has been dismissed by Nathan Lyon in Tests, the most by any bowler. The record was previously held by James Anderson (4 times).

4 Australian batsman have been dismissed by Jadeja for 4 times in Tests David Warner, Smith, Glenn Maxwell and Lyon. Of these men, nobody else has got Maxwell even thrice, while Umesh Yadav had got Smith 4 times and Ashwin had Lyon 4 times.

78 wickets for Ashwin in 2016-17, the joint-most by any bowler in a season. Ashwin equalled Dale Steyn s tally of 78 wickets, in 2007-08. After Ashwin, Jadeja is on the list with 67 wickets in this season. Both Ashwin and Jadeja have one Test each in this season.

3rd-fastest Australian to 5,000 Test runs Smith. He touched the 5,000-run landmark in his 97th innings. Only Don Bradman (56) and Hayden (95 innings) have been there faster. Overall, Smith stands at joint-7th spot in the list.

6 century stands between Pujara and Vijay in 2016-17, the 2nd-most by any pair in a season. The record of 7 hundred partnerships is held by Hayden and Ponting 2005-06. 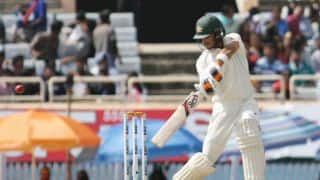