Four centuries including a double ton to a nine-for to injuries to speculations to verbal volleys to snorters, some were high points, some not so and some low.

Demonetisation was in the headlines when India had last drawn a Test. It was against England in Rajkot. A year before that, when Mitchell Johnson was still an active cricketer, was the last time when Australia drew a Test after fighting on all five days. That was 18 Tests back (not a rain-effected draw). With crumbling wickets and attacking mindsets, a possible result called ‘draw’ had skipped our minds until Shaun Marsh and Peter Handscomb pulled off a spectacular rescue act in the third Test at Ranchi to ensure the series remained levelled at 1-1. FULL CRICKET SCORECARD: India vs Australia, 3rd Test at Ranchi

The Test remained action-filled. Four centuries including a double ton to a nine-for to injuries to speculations to verbal volleys to snorters, some were high points, some not so and some low, Suvajit Mustafi presents the match highlights.

Jadeja begins honeymoon with full-toss: David Warner was getting into the groove. We thought so until Ravindra Jadeja bowled a full-toss that the southpaw hit straight back to him. Warner’s woes continued in India, while the stunning reflex-catch was only the start of the good things to come ahead for Jadeja.

Kohli’s shoulder: Be it those bulging biceps or tattoos or the malleable wrists or the middle finger, Virat Kohli’s hand has made as much news as the man himself. ‘Shoulder’ only made it in abstract sense. Why leave out that literally?

In the second session of the Test, a Kohli-dive prevented Australia scoring a run but saw him injure his right shoulder. He remained out of action for five-and-half sessions of play with there being speculations of him being ruled out of the Test. FULL CRICKET SCORECARD: India vs Australia, 3rd Test at Ranchi, Day 5

The shoulder later went on to make more news. We will come to that.

The ROFL moment of the Test: Two very unlikely characters were involved in what can be termed as the funniest moment. Wriddhiman Saha and Steven Smith, two protagonists of the draw got involved in a compromising position.

Here’s the event from my Day One highlights, “Smith was batting on 97 when he got an inside edge and ball took a shelter between Smith s pads. Saha followed the red cherry and attempted to pull the ball from between Smith s legs, and in process both landed on the floor. Saha still focussed on the ball and plucking it, continued to appeal. While umpire Ian Gould was in splits, others found it funny too but not Smith.” Pujara The warrior who guards Test cricket with dead bat

You can watch the video and break for a laughter.

Smith justifies the ‘No.1 tag’: Australia were 140 for 4. All eyes were on Smith to take them to a respectable position. Smith did not fail the expectations. He is the No. 1 batsman in Tests for a reason. His 178 not out saw Australia post 451.

In process, he notched up a few records. He completed 5,000 Test runs. He became the second-fastest (in terms of Tests) to the milestone after a certain gentleman named Don Bradman. He became the only Australian skipper to notch up a 150 in India.

This also became the sixth instance of a visiting captain scoring over 150 in India. Alastair Cook has done it twice while Clive Lloyd has done it three times.

Big match. Big Show: Glenn Maxwell welcomed his Test return after a two-and-half year hiatus with his maiden Test hundred. The Smith-Maxwell 191-run stand for the fifth wicket saw Australia gain a strong foothold in the Test. The celebration to the hundred was an emotional one and he received a tight hug from his skipper.

This was also the first time in Maxwell’s international career that he lasted over 100 balls. He also became only the second Australian after Shane Watson to register international hundreds across formats. Che Pujara: The Marathon Man!

Jadeja does a Dhoni in the Dhoni land: Jadeja’s five-for restricted Australia to 451 on a placid batting surface. The Pat Cummins’ dismissal was my personal favourite.

Rahul vs Cummins: Straight from my Day Two highlights: “Cummins was a teenager when he played his first Test. He is 23 now when he played his next. Between those 7 wickets and the wicket of KL Rahul, there were 1,947 days and 64 Tests. Cummins was getting the odd ball to kick off the surface and often caught Rahul by surprise. There were war of words and Rahul backed those glares with exquisite strokeplay as well.

While Rahul went on to dominate most of the deliveries bowled by Cummins, he was eventually deceived by a slower bouncer that took the bat s edge before lobbing to Wade s gloves.

By then, Rahul had crafted fine 67, an innings that comprised 9 boundaries. This isn t it. Before this series started, Rahulhad 4 hundreds and 1 fifty. Now he has as many hundreds and 5 fifties.”

Murali Vijay’s happy 50: Vijay made his 50th Test momentous by slamming his 15th Test fifty. He has made it a habit to score well against Australia, against whom he averages a shade over 57. However, he missed out on a three-figure as he lost concentration just ahead of the lunch break, throwing it away by getting stumped, in attempt to hoist Steve O’ Keefe out of the ground. Vijay fell for 82 but not before he clocked his sixth hundred-run stand this season with Pujara. You ve been missed, Pat Cummins

DRS woes for Australia: After India’ misfortune and controversies over DRS, it was Australia’s turn to face the heat of technology as they fell on the other side of it this time. Seeing Australians challenge unsuccessfully and with Indians getting a better success rate with it, Kohli, Vijay and Jadeja were seen visibly elated.

On Day Three, Kohli even walked out of the dressing room to cheer Australia’s loss of referrals, or let us put it that he was elated at India winning the challenges.

“Amidst huge roars, Kohli walked out to bat in the second session. The clips of his net practice had gone viral by then. However, he spent more time at the nets than in the Ranchi pitch.

After Australia had taken the second new ball, Kohli edged a fuller delivery from Cummins to Steven Smith, out of all, at slips. The ball prior to that, Glenn Maxwell had made a fantastic save (Kohli-like that got him injured) at the boundary. After that, Maxwell was seen mocking the Indian captain by placing a hand on his shoulder. It seemed he had done it in jest, but in social media it got blown out of proportion. He could have avoided that though.

Things got uglier on the social media space when photos of Smith teasing Kohli post his dismissal started doing rounds until some sanity prevailed and the real thing came into fore.

All about Camera Angle. pic.twitter.com/68f1l0wBRo

The broadcasters had to later apologise for the misleading Smith footage. Smith too expressed his displeasure on the same in the post-match conference.

Indians meanwhile did not like Maxwell’s mocking of Kohli’s shoulder injury and more was in story.

PUJARA: Pujara batted like a bully. He batted for seven sessions to score his 202. He has now played the longest innings by an Indian batsman by consuming 525 balls. The previous best was Rahul Dravid s 495 balls that he faced against Pakistan in Rawalpindi, in 2004.

This was Pujara’s third Test double hundred. He now has 2,007 runs in First-Class cricket this season. Pujara’s double ton saved the game for India and helped them get to a winning position. He was well supported by…

Saha, who added 199 for the seventh wicket with Pujara. This was Saha’s third Test hundred and he now has half of the hundreds that Dhoni got for India in one-third of the games he played.

Meanwhile, Cummins bowled brilliantly. He was denied a five-for by India but he altered his length brilliantly and bent his back bowling quality short-pitched deliveries to pick a four-for.

While this happened, Lyon picked up a wicket after 75.2 overs and O’ Keefe had bowled 77 overs in the innings.

And not to forget Chris Gaffaney’s gaffe:

Yours truly, Sir Jadeja: Jadeja was not done. He came out and scored a brisk 55-ball 54 not out. India declared with a lead of 152, giving Australia half-an-hour to bat on Day Four. Jadeja cleaned up Warner and Lyon to place India on brink of a win.

The warrior in @imjadeja celebrates #INDvAUS. India have also declared their innings on 603/9, lead Australia (451) by 152 runs pic.twitter.com/XcHPO0ObEU

But Kohli’s shoulders were not weary yet. He decided to give Warner a ‘shoulder send-off’

Shoulder gesture by @imVkohli when warner got out pic.twitter.com/IHXDjqOauN

Don’t angry Ishant! Ishant was in middle of an ordinary spell when he ran in and was stopped by Matt Renshaw when there was a sightscreen obstruction. Or maybe, he was distracted by a moving Vijay in the short midwicket region. An angry Ishant sent down a throw to Saha and let Renshaw and Smith know his displeasure. He then made Renshaw lick the ball and later leave the ground.

Here is what happened.

After a steady display in the first hour of the final day’s play, Smith left a Jadeja-delivery that fell outside off-stump and spun sharply to dislodge his off-stump.

India were sniffing a win but…

Marsh and Handscomb’s resistance: We often mistake Australia for only aggression. They are also known for the grit. No, Indians weren’t complacent when Smith fell. A dogged effort from Shaun Marsh (53) and Peter Handscomb (72*) saved the game for Australia.

They batted for 62.1 overs and added 124 runs. The Western Australian veteran and the Victorian youngster starred for Australia when it mattered and ensured the series stayed levelled at 1-1, as they teams now travel to Dharamsala to battle it out for one ultimate time.

Meanwhile, the King of Ranchi also made his way to the stands. Had Ranchi made it to the Vijay Hazare Trophy final, he would have been at Delhi.

Ok, enough cricket. On a fun note, we leave you with this. 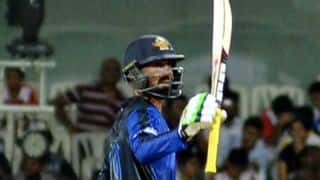 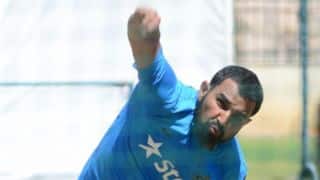