Chris Balderstone possibly played a game of darts after the round of football!

September 15, 1975. Unbeaten on 51 at stumps in a County Championship match at Chesterfield, Chris Balderstone drove to the Doncaster Rovers Football Club ground to play a Football League match. Abhishek Mukherjee looks back at the only day when a man played both First-Class cricket and The Football League.

Chris Balderstone played two Tests, scoring 39 runs and capturing a solitary wicket. He scored a pair in the second of these Tests, being bowled by Michael Holding in both innings during his 14-wicket rampage at The Oval.

He had an impressive tenure for Leicestershire and Yorkshire. He played First-Class cricket for 25 years (continuing after he turned 45), and from 390 matches he scored 19,034 runs at 34 and captured 310 wickets at 26. His career, though impressive, was certainly not outstanding.

However, Balderstone had another claim to his fame. He played 566 senior club matches (for Huddersfield Town, Carlisle United, Doncaster Rovers, and Queen of the South), scoring 93 goals. In short, though he was not a dual international, he was a competent footballer. He also went on to lead Carlisle United during their golden era.

For the uninitiated, The Football League (founded 1888) is the oldest professional association football league, and remained the main football league in England till 1992, when the top 22 clubs split away and the English Premier League was formed

Following an impressive career with Yorkshire, he decided to follow one of the shrewdest brains in English cricket: “Ray Illingworth took me to Leicestershire. I might be a decent bloke on the outside but he knew I was mentally hard through football. Cricketers might think they’re pretty hard but they’re not compared to footballers. It was a great move for me.” He never looked back.

Unfortunately for Balderstone, Doncaster Rovers was supposed to play Brentford in a Fourth Division Football League match on September 17. Given that the two grounds were not far away from each other, Leicestershire granted Balderstone permission if the Championship was sealed by then.

Illingworth decided to bat, but the Derbyshire seamers — Mike Hendrick, Alan Ward, and Phil Russell — ripped the Leicestershire top-order apart, reducing them to 77 for 6. Jeff Tolchard (Roger’s brother) and Jack Birkenshaw then added 67, but once both fell, Leicestershire were in serious trouble at 146 for 8.

Graham McKenzie, playing his last First-Class match, walked out, and started off in cavalier fashion. He added 43 with Norman McVicker and 37 with Ken Higgs, and Bob Taylor probably erred in introducing Geoff Miller too late. McKenzie hit around for his 44, and was left stranded as the tourists piled up 226.

Like McKenzie, it was the last match for Brian Bolus as well. He added 70 for the opening stand with Phil Sharpe after the rest day, and with Alan Hill and John Ward also chipping in, Derbyshire reached a comfortable 138 for 3. A lead seemed imminent.

Then Illingworth teamed up with McVicker, claiming four wickets apiece. Derbyshire were soon reduced to 181 for 9, and it was only gutsy stand between Taylor and Hendrick that took them anywhere close to Leicestershire’s total. They still fell 15 runs short. Leicestershire had managed two batting and four bowling points: their tally read 230.

No time to relax

Ward took out both openers, and though Brian Davison and Illingworth contributed, the onus was on Balderstone to give Leicestershire a formidable lead. Had he been dismissed he would have got away, but with wickets falling around him, Balderstone had no option but to grind it out till 6 PM. The day’s play ended at the aforementioned time with Leicestershire on 108 for 5 (123 ahead) and Balderstone on 51.

Unfortunately for him, the match was due to start at Doncaster Rovers Football Club Ground at 7.30 PM. Though the match was played at Chesterfield, Balderstone did not get a chance to cherish the most famous production of the city: the sofa.

Google Maps shows the distance between the two grounds as approximately 30 miles. It was not a quick commute on 1975 roads. But there was no stopping Balderstone. He got his car, drove straight to Doncaster, and took ground in time.

There is not a lot of documentation about the match barring that it ended in a 1-1 draw, but by then Balderstone had already made an entry in the record books — one that does not seem to be emulated in near future.

As per at least two authors (Paul Donnelly and Les Scott), Balderstone stretched things a bit too far that night. The football match got over at 9.10 PM, and Balderstone went on to play darts for Doncaster Rovers against a team from Doncaster Rovers supporters’ club. If it is indeed true, it would have been too incredible, even by the standards of most all-rounders, more so given what followed next day…

Of course, Balderstone could not have ended there. He reached his hundred the following morning, and scored 116 before being run out. Roger Tolchard provided excellent support, and Illingworth decided to go for the outright win. He set Derbyshire 276.

McKenzie and McVicker — those new-ball bowlers with an identical prefix to their surname — removed the first three batsmen in quick time. John Steele (David’s brother) removed John Ward. Hill and Fred Swarbrook then added 53, and it seemed Derbyshire may save the match.

But Balderstone could do no wrong in that 24-hour span. With Illingworth holding one end up, Balderstone deceived Hill into hit one back to him (he also had him stumped in the first innings). Illingworth took out Swarbrook, and McVicker and McKenzie chipped in with a wicket apiece.

The last word, however, had to be Balderstone’s: he dismissed Miller and Taylor, the last two men who could have played till stumps, and fittingly finished things off.

A hundred, four wickets in the match, a football match, and, if we go by rumours, a competitive darts game: that is what you call an all-round performance. 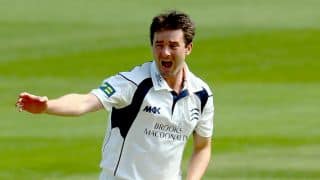