Christopher Henry Gayle is one of the most belligerent batsmen of his era. Renowned as a T20 legend, Gayle also boasts of an outstanding Test record.

Christopher Henry Gayle, born September 21, 1979, is one of the most belligerent batsmen of his era. Renowned as a T20 legend, Gayle also boasts of an outstanding Test record. He is one of the most recognisable faces in international cricket, but his larger-than-life off-field persona truly sets him apart from his contemporaries. On his birthday, Shiamak Unwalla looks at 12 interesting things to know about the man who calls himself ‘Universe Boss.’

Given his immensely lavish lifestyle at present, it is perhaps not hard to imagine that Gayle s childhood was spent in less abundant riches. The fifth child out of six, Gayle s father was a policeman and his mother sold nibbles in their neighbourhood. Though they were never poor, the Gayle family was far from well-off. Cricket was in Gayle s blood. His grandfather had played club cricket, and passed on his passion to the young Chris, who told The Telegraph, The talent was so raw. It had been in the family: my grandfather had played cricket, so I was surrounded by all of that.

The laidback attitude is not a recent development; Gayle had always been rather lethargic. So much so that as a teenager he was called crampy; this means someone who is incredibly lazy.

Guess Who is this innocent looking child? Throwback-Waaayyy Back! #1996 #BabyFace #DreamyEyes

The T20 boom has turned the lives around of a lot of budding cricketers, but no one has benefitted as much as Gayle. He was, quite simply, born to rule the shortest format of the game. Gayle is the greatest ever T20 batsman by a huge margin. He became the first (and so far only) man to score over 8,000 runs, over 10 tons and over 50 half-centuries and the first man to hit over 500 sixes in T20s. He has played in virtually every T20 league in the world, and has dominated every one of them. He also holds the record for highest T20 score (175* for RCB in IPL) and the fastest T20 century (off 30 balls during his 175*). He has played T20 cricket for Jamaica, Jamaica Tallawahs, Kolkata Knight Riders, Royal Challengers Bangalore, Western Australia, Sydney Thunder, Matabeleland Tuskers, Barisal Burners, Dhaka Gladiators, Highveld Lions, and Somerset.

The showman continued his form on his return to limited-overs cricket setting a new record. He became the first batsman to complete a century of sixes in T20Is in the recent series against England at Chester-le-Street. He reached the milestone in his 52nd match, off 49 innings.

And yet, for all his T20 exploits, Gayle is a criminally underrated Test player. His phenomenal record in T20s sometimes makes people forget that Gayle is the eighth-highest run-scorer in Test cricket for the West Indies, and is one of only nine West Indians to have played over 100 Tests. He is also their third-most prolific opener in history, behind only the legendary Gordon Greenidge and Desmond Haynes (Gayle averages more than Haynes as opener though).

Another feather in Gayle s cap is that he is one of only four batsmen the other three being Don Bradman, Brian Lara, and Virender Sehwag to have scored two Test triple hundreds. And people call him a T20 specialist!

ICC Cricket World Cup 2015 saw a number of records being smashed, and Gayle was responsible for shattering one of them. He became the first man in history to score a double century in a World Cup match when he hammered 215 against Zimbabwe. In doing so, he broke the 16-year old record of Gary Kirsten (188*) of highest score in a World Cup. Sadly, the record stood for barely a week before Martin Guptill scored an unbeaten 237 ironically against West Indies to become the highest scorer in a World Cup match.

When he scored the 215 against Zimbabwe, Gayle became the only cricketer in the world to have scored a T20I century, an ODI double ton, and a Test triple hundred (two, actually). The only other cricketer who comes close is Virender Sehwag, who has an ODI double, a Test triple (once again, two), and a T20 (but not T20I) hundred.

Another aspect of Gayle’s cricket that is often overlooked is his right-arm off spin (that admittedly do not turn). He has over 160 ODI wickets and more than 70 Test wickets, with five-fors in both formats. If one includes his T20I wickets as well, he has over 250 international scalps, which is not insubstantial.

9. Run-in with the government

Gayle told The Telegraph that he resents the Jamaican government for not recognising his status as one of the leading cricketers in the world and for not granting him small favours on a couple of occasions. I am so disappointed in the Jamaican government. I m just asking for a little decency and a little acknowledgment. I ve scored two triple centuries and I never even saw at a camera at the airport. That hurt. I have done so much for hospitals and schools, as a sporting ambassador, and all I do is ask my country twice for a small favour, and neither time did they say yes I have seen other people, who have not done anything at all for Jamaica, receiving lots of privilege. I have paid my taxes, millions to be exact, and I will never ask this government for anything again. I will not give them a third chance to turn me down.

Gayle is right when he speaks of having done a lot for Jamaica. He is certainly not tight-fisted when it comes to spending on himself, but Gayle is also equally generous when it comes to giving to charity. He started The Chris Gayle Academies in Jamaica and London with an aim to improve access to good quality education, training and employment for at risk young people in Jamaica and the UK.

Gayle christened himself Universe Boss, and it is a suitable moniker for a man who lives a most bohemian life. Gayle has his own bar in Jamaica called Triple Century Sports Bar which he frequents regularly. He has a palatial house in Jamaica that overlooks Kingston, has four garages, two swimming pools, a bar, a home cinema, and a stripper pole in his bedroom. He lives an extravagant lifestyle; his average day comprises of Shower, dinner, rum, party, drunk, sleep. His Instagram account is full of pictures of him (usually flanked by good looking women) celebrating himself.

Mood.. They cheer for me…. Photo credit @suliebenn while in #Africa … It’s London night out now!!! Enjoying my few days holiday!! #StressOut #SorryNotSorry

Gayle was also caught in the ‘Don’t Blush, baby’ incident that took the social media by storm. Gayle had created an outrage during the 2016-17 BBL season with his infamous ‘Don’t blush, baby’ flirting boundary-line interview with a female TV reporter during a spell with the Melbourne Renegades, sparking claims of sexism. He was fined later and many cricketers condemned the incident. However, Gayle did apologise for the incident the day and claimed it as a ‘simple joke.’

In the same year during IPL, Gayle became a father to baby girl and named her ‘Blush’. The name raised many eyebrows as many felt if it was an intentional attempt given his infamous history.

There is truly no one like Gayle. Shine on, you crazy diamond! 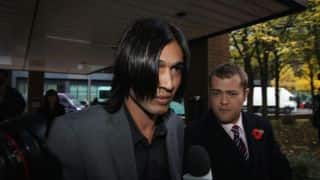