Chris Gayle is back in the Knight Riders family. No, there is no need to get too excited yet.

Yes, it has happened again! Chris Gayle is back in the Knight Riders family. No, there is no need to get too excited yet. He is not making a return to Kolkata Knight Riders (KKR) to play IPL. It is not for Trinbago Knight Riders (TKR) in CPL either. Gayle will now play for Cape Town Knight Riders (CTKR) in South Africa s upcoming Twenty20 extravaganza, the T20 Global League. Gayle has been roped in by CTKR in the player draft session on Sunday. Gayle had played for KKR in the first three seasons of IPL and has since been playing for Royal Challengers Bangalore (RCB). However, Knight Riders owner Shahrukh Khan has continued to maintain good relations with Gayle, which eventually led to him being roped in for CTKR.

Nevertheless, having been roped back into the Knight Riders family, the world is already abuzz about if this could mark the return of Gayle back to KKR in IPL. It must be noted that all the players are scheduled to go under the hammer for the 2018 IPL Auctions. If Gayle indeed goes the hammer, a lot of franchises including KKR can be very interested in getting the services of the big Jamaican.

Interestingly, the big question is that if KKR manage to rope Gayle back in, will he be as impactful for the franchise as he has been for RCB? Gayle had missed the 2008 season owing to an injury. He did play in 2009 in South Africa, scoring 171 runs from 7 matches at an average of 29 and a strike rate of 120. However, he had to return after playing halfway owing to international commitment. Nevertheless, he was back for the third season, where he managed to play 9 games, and finished as the second-highest run-scorer, scoring 292 runs at an average of 32 and a strike rate of 159, including a couple of half-centuries.

Gayle s performance for KKR in IPL has generally been average. At his prime he shone for RCB on the Chinnaswamy track, the home ground for RCB. One of the reasons for Gayle s inability to fire for KKR was due to the slow turning tracks at Eden Gardens.

However, with time the Eden Gardens track has undergone major change over the past few years. It is a flat track these days, ideal for someone like Gayle. However, his average form of late could be a matter of concern. For RCB in IPL 2017 he scored 200 runs from 9 matches at an average of 22 and a strike rate of 123.

Therefore, this upcoming inaugural edition of the T20 Global League will be a tournament to watch out for. The Knight Riders management will be keeping an eye on Gayle s performance of the big Jamaican. If Gayle returns, it will be a treat for KKR fans, who have been craving for him since he left in 2011. 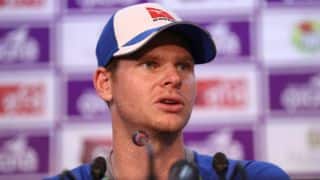