People turned on their TV sets and mobile browsers as Chris Gayle went bonkers, and went on shattering records one by one. . Varun Arora looks at some technical aspects of Chris Gayle’s batting. READ: Chris Gayle equals record for most sixes in ODI innings

West Indies had played two One-Day Internationals (ODIs) in ICC Cricket World Cup 2015. They have lost embarrassingly to Ireland, but had managed to win the tie against Pakistan by a fair margin. But out of all, there was something missing from the Caribbean unit. READ: Chris Gayle scores 200 against Zimbabwe in ICC World Cup 2015

Chris Gayle, the tall, giant from Jamaica, had still not fired. He got a breezy 36 against Ireland but the Gayle power, often visible in the Indian Premier League (IPL), was missing. As West Indies prepared to take on Zimbabwe at Canberra, there were expectations that Gayle storm was about to arrive. It was long back Gayle had not played a swashbuckling innings in ODIs. READ: Chris Gayle becomes first non-Indian to score ODI 200

On, Tuesday, the storm finally arrived as powered to 215 off just 147 deliveries — an innings that included 16 sixes and 10 boundaries. Gayle functioned and practised his shorts in a peculiar fashion which made it impossible for a bowler to stop the storm. Gayle’s innings had three technicalities linked to all his giant sixes. READ: Chris Gayle score 5th double-century in ODI history

The High backlift: Gayle is a tall man, and his high backlift helped him to bring more power to his strokes. When the Zimbabwe bowlers tried to bowl at good length areas, Gayle used his high backlift to great advantage. He stood deep in the crease and with his high backlift hoicked the ball out of the park. READ: Chris Gayle smashes record to guide West Indies to 372/2 against Zimbabwe

Clearing the front leg: The most significant part of all his sixes was that he managed to clear his front leg pretty easily, which ensured him to free his arms and hit the ball a long way. Zimbabwe bowlers counterattacked by bowling on his full on his legs but the ploy still failed as he zoomed away his front-leg in no time. READ: Chris Gayle, Marlon Samuels put on highest-ever ODI partnership

Standing deep in the crease: He had his mind set. He was prepared to hit everything that came his way. Gayle was rooted deep in his crease, which helped him to create enough space to play any shot. READ: Chris Gayle registers highest-ever World Cup score 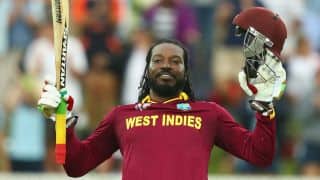