It took 19 innings spread across nearly two years, but Chris Gayle finally got to three-figures.

He sprinted for his 50th run like his life depended on it. Not walked, or jogged, as is his usual wont. This was the king of cool; the man for whom only fours and sixes count; the man who doesn’t bother with mere trivialities like singles. This was Christopher Henry Gayle, the god of Twenty20.

And he sprinted for his 50th run like his life depended on it.

Those who questioned his commitment, who questioned how much he really cared about ODIs, need only have seen the big man gallop down the ground for a measly single to know that despite his air of detached calm, Gayle clearly cares about his game.

The signs were ominous early on; Gayle stepped out and hoisted Tendai Chatara over mod-on off the eighth ball he faced. He then cut the same bowler ferociously through covers, before hitting his third boundary in that same over. Once he crossed fifty, he brought out the sixes in style as well.

It took 19 innings spread across nearly two years, but Gayle finally got to three-figures. Gayle reached the landmark having hit five fours and five sixes — which means that he ran the other 50 runs, something not associated a lot with him.

Along the way, Gayle crossed 9,000 ODI runs, becoming only the second West Indian since Brian Lara to get the landmark. He also became only the fourth man in history — the other three being Jacques Kallis, Sanath Jayasuriya, and Sachin Tendulkar — to attain the double of 9,000 runs and 150 wickets in ODIs. And they said Gayle does not care. Chris Gayle completes 9,000 runs in ODIs in ICC cricket World Cup 2015

Jason Holder had said in the pre-match press conference that he had faith in Gayle, and that once he started firing West Indies could well cross 400. While Marlon Samuels’ crawl ensured that 400 wasn’t likely, the fact that Gayle is back in form should be extremely worrying for the opposition. Gayle is the senior-most member of the West Indian side, and is someone who can lift the team with his mere presence. An in-form Gayle could prove decisive in West Indies’ fortunes.

Despite what his critics say — and what Dave Cameron seems to agree with — Gayle remains their best prospect regardless of the format. When Gayle fires, West Indies look like a far stronger unit. The juggernaut has returned. Beware Hurricane Gayle! 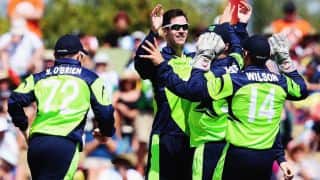