A sneak peek into Chris Lynn's career and his awe-inspiring catch against KKR.

Chris Lynn lifted the sagging spirits of Kolkata Knight Riders with a truly heroic effort in Indian Premier League 2014 game against Royal Challengers Bangalore. Bharath Ramaraj has a sneak peek into his career and his awe-inspiring catch against KKR.

Ever since Chris Lynn with a cool, calm and collected head on his young shoulders aggregated a superlative innings of 139 for Queensland against Western Australia (WA) in 2010, he was earmarked for success. It is never easy to stand toe-to-toe against the likes of Nathan-Coulter Nile, Ben Edmendson and Steve Magoffin at just 19 and essay a breathtaking hundred.

So, for those few cricket enthusiasts who have followed his steady progress, it wouldn’t have come out as a surprise that he was able to engineer Kolkata Knight Riders’ (KKR) triumph over Royal Challengers Bangalore (RCB) in IPL 2014. It wasn’t just about him walloping wily spinner, Muttiah Muralitharan to all parks of the ground, but that tigersh-like fielding helped KKR to script a nail-biting victory over their formidable foes.

Lynn is one of those modern day players who believes in playing across the line and mostly through the mid-wicket region. The days of batsmen dancing down the wicket like a ballet dancer and playing straight down the ground seems to be a thing of the past. In the game against RCB, he did exactly that. He was waiting for Muralitharan to come into the attack. As soon as he came into the attack, he slog swept him to launch him over the mid-wicket region for a six. He then clambered Muralitharan for another six over deep fine-leg. It has to be said that Murali looked well past his best yet, it was great to see the incontrovertible confidence the youngster showed to flag down a bowler who has taken thousands of wickets in his illustrious career.

Lynn followed it up with one of the best catches you could ever see on the boundary line. For any boundary rider, it is one helluva of an effort to judge a catch. AB de Villiers, South Africa’s batsman lined up R Vinay Kumar to slog it across the line over the mid-wicket region. For a second, he must have believed that his splendored shot would end up in the stands. However, Lynn kept his eye on the ball even though, he slipped and somehow took the catch sitting down. The stunned look on De Villiers’ face said it all. The big wicket of De Villiers turned the game on its head, and KKR won the game by a mere two runs.

It has to be remembered that Lynn is just 22 and has a long way to go to leave his mark in the world of cricket. Yet in his brief career, he has showcased heavy dollops of talent and skill which gives an indication that he can be a fine cricketer in the years to come. Above all, he seems to have the temperament to succeed. 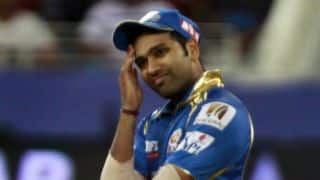