The retirements of Michael Clarke and Kumar Sangakkara in quick succession has left a huge hole in international cricket in terms of proven class.

The retirements of Michael Clarke and Kumar Sangakkara in quick succession has left a huge hole in international cricket in terms of proven class. [Also Read: Kumar Sangakkara: The most prolific batsman in 21st century]

There are, however, striking dissimilarities in the two retirements. Sangakkara went out when his cricketing stocks were still high. On the other hand, Clarke found his batting form had deserted him. The loss of Ashes against expectations made him take the honourable route to the exit than being asked to go. [Also Read: Michael Clarke: 31 memorable moments from his illustrious international career]

For Clarke, talent was never an issue but an ailing chronic back injury was. He was a master at playing spin. The way he batted in is debut Test at Bangalore in 2004, spoke volumes of his class. He smothered the spin by coming down the track and used the depth of his crease to cut. Proof of his prowess against spin is his record against the sub continental teams: 42 Tests (against India, Sri Lanka, Bangladesh and Pakistan) and scored 3380 at an average of 51.21. [Also Read: Kumar Sangakkara gets emotional during his retirement speech]

Unlike Clarke, Sangakkara was in sublime form in the last couple of years. In 16 Tests since 2014, Sangakkara scored 1843 runs at 61.43, slamming five hundreds. He finished as the fifth highest run-getter in Tests, amassing 12,400 runs from 134 matches with 38 centuries. He also plundered four back-to-back hundreds in the 2015 World Cup, another world record. [Also Read: Michael Clarke: The agonising final stretch]

Let’s glance at some fun facts about these two stalwarts whose exits left the game poorer.

1.  Clarke’s highest in Tests is an unbeaten 329 against India in 2012, while Sangakkara’s best in Test is 319 against Bangladesh in 2014. However, Sangakkara leaves Clarke far behind in scoring double hundreds. Sangakkara has a whopping 11, just one short of Bradman, compared to Clarke’s four.

2.  In the fourth innings Tests, Sangakkara enjoys a batting average of 41.53 with two hundreds from 34 outings. While Clarke has scored runs at 31.90 getting a solitary hundred.

Each has had different tales, but love for the game is what united them and brought them under the same roof and got them to overhaul the challenges. Their place among the pantheons of greats is assured. 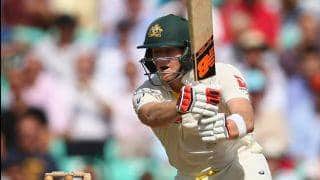