India has never been a happy place for Australian debutants. Nishad Pai Vaidya unravels the travails of the wet-behind-the-ears men from Down Under. 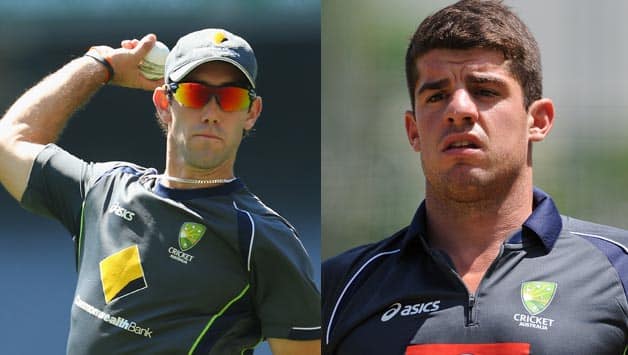 Can Glenn Maxwell (left) and Moises Henriques (right) who made their Test debuts in the ongoing series go on to play for a long time like Michael Clarke, Darren Lehmann and Peter Siddle or fall like the long list of Australian debuts in India who soon fell by the wayside? © Getty Images

India has never been a happy place for Australian debutants. Nishad Pai Vaidya unravels the travails of the wet-behind-the-ears men from Down Under.

“I think India is probably the toughest environment of all to blood new talent and that’s what is happening.” – Don Argus after Australia’s shocking defeat at Hyderabad.

Don Argus, the man whose famous review drew the roadmap for Australia’s resurgence to the top couldn’t have been more precise in his assessment. The Indian curry is always spicy and not the easiest to digest if you are a first-timer. The struggles of the young Michael Clarke-led side may be shocking, but it isn’t unbelievable as the more formidable Australian teams of the past — led by Mark Taylor and Steve Waugh — found it difficult to produce their best.

Since the inception of the Border-Gavaskar Trophy in 1996, Australia have introduced youngsters to Test cricket on almost all their tours to India. The 2001 tour was is the only exception as Waugh brought in a side that had its machinery in place. However, on other occasions, they have tried to blend in new talent, spinners in particular — a strategy that has often back-fired. Majority of them were pushed into obscurity almost immediately after the tours. Not only that, but a few even ended their careers in India.
Let us establish this detail by revisiting each tour since 1996:

It was the first game for the Border-Gavaskar Trophy and India clinched it comprehensively. Australia were without Shane Warne and the spinners who played that game were Brad Hogg and Peter McIntyre. Hogg was making his debut in that game and had to wait for almost seven years for his next Test even though he established himself in the one-day side. On the other hand, this game was McIntyre’s last of two Tests.

In a series dominated by Sachin Tendulkar, the Australians could only manage a victory by clinching the third Test. The men who donned the baggy green for the first time on this tour were Gavin Robertson (off-spinner), Paul Wilson, Adam Dale (fast bowlers) and Darren Lehmann. Robertson and Dale went on to add only one more cap each to their respective tallies after this tour. Wilson never played for Australia again and Lehmann is the only one who stayed long enough.

A resurgent India under the leadership of Sourav Ganguly clinched a remarkable bout where there was an unbelievable ebb and flow of momentum. Australia came into this tour looking good to conquer the “Final Frontier.” However, VVS Laxman and Harbhajan Singh symbolised the Indian fightback and bamboozled the tourists. There were no debutants on this tour, but Damien Fleming and Colin Miller never played for Australia again after this experience.

Waugh’s dream was finally achieved as Adam Gilchrist masterminded a historic triumph for Australia — their first in India for 35 years. Michael Clarke announced his arrival on this tour with a hundred on debut and showed why he was here to stay. Nathan Hauritz, the off-spinner was handed the honour in the final Test at Mumbai. However, he had to wait for four more years for his next Test.

It was more a battle of the equals as Australia were still strong and India had regrouped. Australia had their moments early on, but India fought back and went on to dominate the series. Cameron White, Peter Siddle and Jason Kejza were the new entrants into Test cricket on this tour. White hasn’t played Tests again and remained a regular feature in the limited over formats. Krejza had a fantastic debut at Nagpur as he scalped 12 wickets in the match, but added only one more cap to his score. Siddle managed to hold on and is an integral part of the Australian setup.

The scoreline could have been very different had VVS Laxman not scripted another miracle in the first Test at Mohali. Having survived a scare in the first game, India were the dominant side in the second Test at Bangalore and completed a rare clean sweep over the Aussies. Peter George made his debut at Bangalore and scalped the wicket of double centurion [214] Sachin Tendulkar in the first innings. With a battery of pacers lined up, George is still waiting for another look-in. Meanwhile, Hauritz had done well to get back into the Australian side and had established himself. The Indian batsmen, Tendulkar in particular, were severe on him and his Test career never recovered after that outing.

These facts go on to establish Argus’ conclusions on the latest result. In the ongoing series, two Australians — Moises Henriques and Glenn Maxwell — have donned the Baggy Green. Henriques had a fantastic start at Chennai, while Maxwell had his moments at Hyderabad. Given the trend, the odds are stacked against them, but there always is hope. Clarke, Lehmann and Siddle have shown that they can build successful careers even after starting in the most testing conditions. But, it isn’t just about the debutants as the other youngsters would also be wary of this detail.