Former Australian captain Ian Chappell talked about holes in the legendary wall of Rahul Dravid’s defence after it was breached twice in the first Test at Melbourne. But the real hole in the wall may be the one that stops India’s batsmen attacking effectively. Namely, their inability, or refusal, to go for the pull shot.

So far, Sachin Tendulkar is the only Indian batsman who has looked totally assured and even very positive in intent. That should not surprise most of us, though on recent form he had looked off colour. After all, Tendulkar hit a century at Perth on his first trip to Australia in 1991-92, to follow one in Sydney.

Reflecting on that innings for a magazine once, Kiran More, who had valiantly partnered him in that Perth encounter, observed that Tendulkar could hit the short arm pull, which not many batsmen in the line-up then had mastered. No wonder then that the sight of Tendulkar operating in his own orbit in this series amidst the abject capitulation of the batting evokes déjà vu. Little indeed, regrettably, has changed. In a long and illustrious career, Tendulkar has demonstrated with alacrity what it takes for Indian batsmen to adapt to all sorts of conditions. But India has failed to learn its lessons, though that is not so surprising, on another note.

Under Craig McDermott’s tutelage, Australia adopted the same method that worked for him when he spearheaded the attack with 31 wickets to a 4-0 rout of India. Australia’s bowlers got the Indians to play and miss in the corridor of uncertainty. They then pushed them back with a barrage of bouncers. The sucker punch: Feed them fullish deliveries on the offside to get them to play away from the body. And one by one, they all perished, falling for the oldest ploy in the fast bowling world.

That spotlights two problems in their approach. One: that they didn’t know where their offstump is. Two: they didn’t punish the short stuff. Number one is fairly normal in conditions that offer a bit to the bowler. It’s not that a batsman may not know where his off stump is but he may be just drawn to attack and chance his arm.

Later in the day, Australian skipper Michael Clarke too had his moments of indiscretion but nevertheless proceeded to a fluent 47 by close, with more to come. What Clarke did, though, that the Indians didn’t was to get on top of ill-directed bouncers and duly dispatch them to the boundary. Both he and Ponting wasted no opportunity to employ the pull shot to telling effect.

And that is really the only way to counter the push back-and-draw-forward ploy. There is a reason you don’t see bowlers persisting as much with this approach when they bowl to say South Africa or England. Because those batsmen too have the answer and the bouncer becomes a rather costly weapon for the fielding captain. Indian batsmen, however, settle into ducking posture the moment they sight a bouncer and lose the chance to attack and dominate the bowlers.

The problems of Rahul Dravid and VVS Laxman are more understandable. Laxman struck a glorious 167 at Sydney in 2000 even as India crashed to an innings defeat, in conditions much tougher than on Tuesday. Dravid struck 76 out of a team score of 161 at Wellington in 2002. They do have the answers, but in Dravid’s own words, they are a bunch of creaking terminators; more human than they used to be. Let’s not forget even Tendulkar was much less at ease in England last year.

What of Virat Kohli, though, who fell for the bait on Tuesday after looking good for plenty more? What of Suresh Raina’s awkward struggles against the bouncer? Even Virender Sehwag does not employ the pull shot to any great measure and prefers to swing again and again on the offside until a nick inevitably sails to the slip cordon.  A whole generation of talented Indian batsmen are not equipped to handle challenges that the “Big Three”, fortunately for India, managed to overcome through their own application.

The usual lament to that is Indian pitches doesn’t offer that kind of bounce and leave batsmen exposed when they play in Australia or South Africa. Given that India’s pace bowlers have so far called the shots in Australia, there’s no reason that that should change. Secondly, England’s pitches do not offer the kind of bounce and carry that Australian pitches do either.  England, however, prepared meticulously with bowling machines and made sure they would have the answers when they landed in Australia.  I hardly need to mention they did.

India’s faith in serendipitous fortune, rather than scientific and clinical training, has been its undoing in most international sport. Cricket, being less athletic and more drawn out than many games, has for a long time allowed India to get away with such methods. But the modern wave of fitness, athleticism and preparation has gradually swept across cricket too.   And it may do to Indian cricket what astroturf did to Indian hockey.

Unlike international hockey, BCCI has considerable sway, to say the least, in cricket. Surely, it is not beyond their power to at least ensure Indian batsmen get suitably trained to face challenges everybody knows they would face abroad. Even acting as late as today would only salvage future generations of batsmen, but at least they ought to know their short-arm pull when they visit Australian shores. 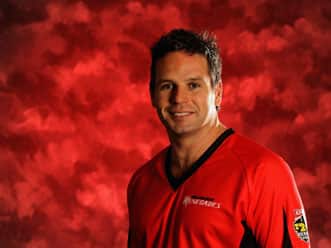 Brad Hodge not interested in playing for Australia anymore