Clinical India secure comprehensive win over England at Leeds in 2002

Clinical India secure comprehensive win over England at Leeds in 2002

On August 26, 2002, India beat England in the Old Blighty after a hiatus of 16 years. Dogged resistance by Sanjay Bangar and Rahul Dravid on Day One set up a solid foundation. Centuries by Sachin Tendulkar and Sourav Ganguly ensured India batted England out of the game. Bowlers then took over and bowled England out twice to give India their first innings victory on England soil. Sarang Bhalerao looks at the triumphant moment in the Indian cricket history. 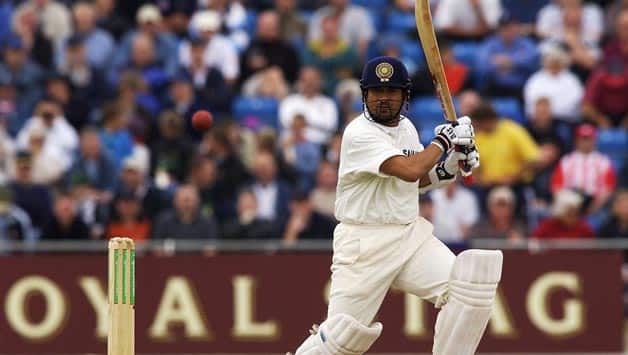 On August 26, 2002, India beat England in the Old Blighty after a hiatus of 16 years. Dogged resistance by Sanjay Bangar and Rahul Dravid on Day One set up a solid foundation. Centuries by Sachin Tendulkar and Sourav Ganguly ensured India batted England out of the game. Bowlers then took over and bowled England out twice to give India their first innings victory on England soil. Sarang Bhalerao looks at the triumphant moment in the Indian cricket history.

On the fifth day morning, when Anil Kumble got the wicket of Andy Caddick caught by Sourav Ganguly, India had achieved their first win on English soil after 16 long years. The Indians were jubilant as they had levelled the series after a loss at the Lord’s. The bowlers had a lot of runs to bowl at and they delivered. But the magnificent edifice was set up by the dogged resistance of the batsmen on the first two days where the Indians ensured that they batted England out of the game.

India won the toss and batted first on the surface that had a tinge of grass. The conditions were also overcast. This was a risk that Ganguly took. Indian openers Virender Sehwag and Sanjay Bangar negotiated the first half-an-hour which saw the ball moving prodigiously. In the seventh over Sehwag got a perfect outswinger from Matthew Hoggard that swung late. It drew Sehwag forward and the edge was safely pouched by Andrew Flintoff at the second slip. That brought in Rahul Dravid at the wicket.

England were on the lookout of wickets so they had placed five fielders in the arc behind the wicket. Hoggard, Andrew Caddick and Alex Tudor were testing the Indian duo, who were quite content to see off the testing phase. In the morning session only four boundaries were hit but the thrills of Test cricket were on fore as the low-risk batting against the moving ball made it an interesting spectacle.

Bangar was resolute, calm and composed while Dravid was like a master practicing his alchemy with consummate ease. Bangar reached his half-century in a risky fashion by running a quick single pushing the ball to the covers. He took 166 balls to reach the milestone. At 53, he was put down by Andrew Flintoff off Tudor. But Bangar fell to Flintoff batting on 68 when the tall all-rounder came round the wicket from the Kirkstall Lane end and bowled a short delivery which was glanced straight to wicketkeeper Alec Stewart. The 296-minute stay from Bangar was an important knock and a compelling case study for the batsmen on how to weather the storm when the conditions are in bowling side’s favour. Bangar earned the nickname ‘Buddha’ after this knock from Dravid. Dravid said that Bangar was frighteningly unemotional and completely in control. The second wicket partnership of 170 put India in a good position.

Dravid was still going strong. His defence was water-tight all throughout the day and England found it impossible to outthink the Indian No 3. Just before the day ended Dravid brought his 12th Test century courtesy of his fourteenth boundary. At stumps, Dravid remained unbeaten on 110 while Sachin Tendulkar was batting on 18.

England’s best chance was to take a few early wickets at the start of the day with the new ball. Dravid and Tendulkar played their shots in the first hour and India scored 41 off the first 10 overs. Tendulkar brought up his fifty with an imposing flick-pull off Tudor. With Tendulkar playing his shots things looked ominous for the home team. Just when things seemed hopelessly out of control for England they got the prized scalp of Dravid. Ashley Giles beat Dravid with the flight and drew him out of the crease and was stumped. Dravid’s 307-ball essay and seven-and-a-half hour compendium ended at 148 but it was a classy knock.

Dravid’s dismissal hardly brought any respite to England as Ganguly took the attack to England immediately. Tendulkar brought his 30th Test century with an exquisite on-drive off Giles, thus surpassing the great Don Bradman’s tally of 29 hundreds. Ganguly bludgeoned Giles for a six and brought about his half-century. England realised they had no chance of bowling India out and set out defensive fields. Tendulkar reached his 150, while Indian captain scored his century off 156 balls. His innings was punctuated by 12 fours and a six.

The post-tea session was rather eventful. Umpires offered the light to the batsmen but India decided to stay on and pile on the agony. The duo matched each other shot after shot and India were inching towards a mammoth first innings total.

Giles was smashed for two consecutive sixes by Ganguly and 23 runs were plundered of that over. The second new ball was flying all over the park. With 96 coming at almost nine-runs per over with the new ball, England were busy chasing leather. Tendulkar turned back the clock with his vintage hitting — the kind of batting brought back memories of his exploits as an opener of the mid ’90s.

As soon as Ganguly was bowled for 128 trying to hoick Tudor, India went off the field. Tendulkar was batting on 185. It was a day where India strengthened their position in the match. Centuries from Dravid, Tendulkar and Ganguly — the first and the only occasion in Test cricket — put India in a position to dictate terms.

For India it was only a matter of time before they declared. The point of interest at the start of the game was whether Tendulkar would get to his double hundred? Unfortunately, he missed out on the landmark by seven runs as he was trapped leg-before by Caddick. India lost wickets in pursuit of quick runs. Finally Ganguly declared Indian innings at 628 for eight.

India then had England in strife, as continuous wickets pegged the home team back considerably. Debutant Robert Key was out for 30. Mark Butcher, batting at No 3, was trapped leg-before by Anil Kumble for 16. England’s in-form batsman Michael Vaughan was out playing a loose shot, an uppish drive, off Ajit Agarkar and was out for 61. Nasser Hussain was out to a peach-of-a-delivery from Zaheer Khan. The ball darted in after pitching and had England skipper right in front of his stumps. At 140 for four only a big partnership could have been ideal to get England out of the precarious position. But Harbhajan Singh had other ideas. He got John Crawley and Andrew Flintoff off successive deliveries to put England in a real tight spot.

Giles and Stewart added 80 for the eighth wicket and put Indians at bay for about an hour. Just when thing looked to be in England’s control Kumble dismissed Giles. India got Caddick before the close of the day’s play. At 264 for nine, the possibility of a follow-on was very high.

It took India only thirteen minutes to bowl England out. Stewart remained unbeaten on 78. Ganguly enforced the follow-on, England were trailing India by 355 runs. England had to bat out six sessions to save the Test. India employed attacking fields and hoped to find the edges.

India were cock-a-hoop as Agarkar had Vaughan leg-before for 15. Key and Butcher played till lunch and stabilised the innings. Key was out to Kumble immediately after lunch playing across the line and missing the ball completely. The ball hit his pads and Key failed to make an impact on his debut.

Bangar came to the party with his medium pacers. He first had Butcher playing at a wide delivery which was held by Dravid at the first slip. Crawley spooned an easy catch to Sehwag at covers. At 148 for four England seemed to be in danger of getting bowled out on Day Four itself. But Hussain and Stewart counterattacked and defied India. They added 91 in 38 overs and took the game to the fifth day.

India took the new ball just before the close of play and hoped to come back afresh on the fifth day, while England hoped for a miracle.

The day started with Hussain bringing up his 12th Test ton and made England hopeful of a fightback. Stewart was struggling to get going against the new ball. Against the run of play Hussain was the first one to be dismissed by Kumble caught by Sehwag. This was the opening India needed. Zaheer then dismissed Flintoff for his second duck of the game. Flintoff was caught by Dravid at the slip. Stewart followed suit and in no time England lost the plot completely.

Giles and Tudor played some positive cricket but there was a hara-kiri committed. Giles attempted an impossible single and was out run-out; Tudor was dismissed soon after. When Caddick was dismissed, India had clinically finished off the game in the first session of Day Five.

The win gave India a tremendous self-belief and India under Ganguly were prospering.

Dravid was adjudged Man of the Match for his stellar performance with the bat in testing conditions. This was his second century of the series. He scored a double ton at The Oval. The series was drawn 1-1. India had a lot of takeaways. Their record overseas had not been impressive. All that, especially the thinking, changed under Ganguly. The Renaissance in Indian cricket had just commenced.

England batsmen have to improve to beat Australia in return Ashes: Geoffrey Boycott