A list of 22 rarely recounted facts about the slouching, hulking Supercat of cricket.

Born August 31, 1944, Clive Lloyd was one of the most destructive batsmen of all time and one of the most successful and respected captains of West Indies. Arunabha Sengupta looks at 22 rarely-known factoids about the man who perfected the West Indian system of world domination through relentless pace bowling.

So, here is a list of 22 rarely recounted facts about the slouching, hulking Supercat of cricket.

1. Clive Lloyd damaged his eyes at the age of 12, having got hit while trying to break up a fight. He had to wear thick glasses after that.

2. Lloyd s father was a chauffeur to the local doctor with no fascination for cricket.

3. His mother, though, did follow the game. She was helped in this cause because her sister was one Mrs. Gibbs, mother of Lance, the greatest spinner produced by the islands.

4. A few yards away from the house Lloyd lived in as a kid was the residence of Robert Christiani a former Test cricketer and a respected commentator.

6. When West Indies played Australia at Guyana in 1965, young Clive Lloyd was recruited as an emergency fieldsman. He once ran into the ground to pass on a message from Frank Worrell to captain Garry Sobers.

7. In his first Test in Australia, Lloyd was asked by Sobers to bowl a few off-breaks. Soon he had centurions Ian Chappell and Bill Lawry caught at cover and mid-wicket, both catches taken by Sobers.

8. When Lancashire played Kent, Derek Underwood confided to West Indian John Shepherd that he had a special plan for Lloyd. The southpaw hit 163 in that innings, with seven sixes off the left-arm spinner. Every time the ball soared out of the ground, Shepherd approached Underwood and asked, Is that the special ball you had for Clive, Derek?

9. When Sobers decided not to play against Australia in 1973 because of injury problems and had relinquished captaincy, Lloyd s name was discussed. At that time, he was not in the team, but was cabled to be ready as a replacement. The Guyanese Prime Minister, Forbes Burnham, a huge fan of Lloyd, personally intervened, asking his Australian counterpart Gough Whitlam to ensure that there would be no problem getting Lloyd s release from his commitment to club cricket in Australia. His influence went further. Back in Manchester, Lloyd was informed by the Guyanese High Commission that his country had decided to pay his fare back to the islands. When he reached, Wes Hall, manager of the team, calmly pointed out that Rohan Kanhai s appointment as captain was merely a stop-gap measure since the brilliant batsman was nearing the end of his career. Lloyd had been earmarked for leadership.

10. During the spectacular 102 in the final of the inaugural World Cup, Lloyd s pull over mid-wicket was famously described by John Arlott as the stroke of a man knocking a thistle-top with his walking stick. Denis Compton said it was one of the greatest innings he had ever seen. He remarked, I can remember only one innings to compare with this one. It was played by the late Stan McCabe when he made 232 at Trent Bridge in my first Test match against Australia in 1938. Sir Donald Bradman beckoned all his players onto the balcony and said, You may never see the like again. Well, 37 years later, I can say we have.

11. In 1976, Lloyd infamously declared the innings at 271 for six at Port of Spain, leaving India to get 403 in the final innings. Albert Padmore, Raphick Jumadeen and Imtiaz Ali could give him just two wickets in 105 overs of spin. India cruised home by six wickets. At the end of the match in the dressing room, Lloyd asked his spinners, Gentlemen, I gave you 400 runs to bowl at and you failed to bowl out the opposition. How many runs must I give you in future to make sure that you get the wickets? Never again would Lloyd be let down by spin. It was the start of a new paradigm: relentless pace. Michael Holding and Wayne Daniel started it by terrorising the Indian batsmen at Jamaica. The visitors as good as forfeited the match and trudged back from the ground like Napoleon s army from Russia.

12. In 1977, at Guyana, the selectors decided to drop some of the young players who had signed up for Kerry Packer s World Series Cricket. Deryck Murray was removed as vice-captain. In response, Lloyd wanted an explanation about how the team had been selected. When he did not get any, Lloyd resigned as captain of West Indies.

13. In 1978, Sadiq Mohammad, Zaheer Abbas and Mike Procter had propelled Gloucestershire to 267 and Lloyd had walked in with Lancashire three down for 33. Procter was charging in to bowl, and one almighty mistimed whack from Lloyd flew off the edge and landed beyond the ropes. A livid Procter blurted something unpleasant to Lloyd, and the West Indian was annoyed. When Lancashire captain David Lloyd walked up to him from the non-striker s end, the man from Guyana simply said, That man is vexing me. I m going to hit him over the pavilion. His skipper sighed resignedly and told him to ensure he connected well. The very next ball indeed flew over the Old Trafford pavilion.

14. Lloyd batted with by far the heaviest bat in world cricket. A troubled old lady in Haslingden, Lancashire, feared for her safety when nearby windows were peppered and smashed by sailing missiles. She called up the local constabulary and reported destruction of property. It was discovered by members of the force that Lloyd was on rampage in the nearby cricket ground, and the destruction had been brought about by cricket balls screaming in at the rate of knots.

15. In 1979-80, when a boorish Colin Croft flicked the bails on his way back to the bowling mark and then barged into umpire Fred Goodall, Lloyd himself stood motionless in first slip and the official had to run all the way to have a word with him. He did not really do too much to control his fast bowler.

16. Lloyd did not take many chances as a captain, even when in charge of the most lethal team of the world. When India defeated West Indies in the 1983 World Cup final, the intention was to pay back with interest during the winter s tour to the subcontinent. West Indies won the six Test series 3-0 and made a clean sweep of the five One-Day Internationals. Even though the Indians were no match for his side, he continued to apply immense pressure on the umpires through his stinging criticism in newspaper columns.

17. Before his 100th Test match, Lloyd had been presented with the Order of Roraima, the second highest national award of his native Guyana. At Bourda, a new stand had been named after him. The Trinidad Government had awarded him the Chaconia Medal Class One: Gold. And even in distant England where he gladdened every heart as a professional for Lancashire, he had received honorary degrees from the Universities of Manchester and Hull.

18. As his towering, slouching, gigantic frame made his way for the 100th Test match at Bourda, the president of the Board, Allan Rae, made a warm speech and felicitated the great man. Speaking for the players was one of Lloyd s most potent weapons, Big Bird Joel Garner: Clive Lloyd is like a father, big brother, guardian and guide to West Indian cricketers. We respect him because he respects himself and all of us. If Frank Worrell led by inspiration and Garry Sobers by example, Lloyd combines both to great effect.

19. Lloyd played 32 Tests from 1981 to the end of his career, scoring 2,342 runs at 61.63 with six hundreds. Not a bit of his adventurous strokeplay was curbed due to advancing age, past 40 when he finally hung up his boots.

21. After retirement Lloyd was made an honorary Officer of the Order of Australia for his services to the sport of cricket.

22. On his return to Guyana after his playing days, Lloyd worked as a civil servant for his country s Ministry of Health. 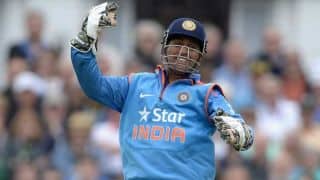 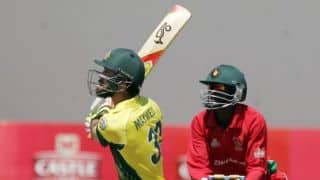