The Champions League Twenty20 (CLT20) 2013 began with the Rajasthan Royals getting off to an imposing seven-wicket win over the Mumbai Indians on Saturday in Jaipur. Vikramjeet Malik and Sanju Samson were the star performers for the Royals, while Rohit Sharma and Kieron Pollard shone for Mumbai. Shrikant Shankar analyses the performances of all the players from the match. 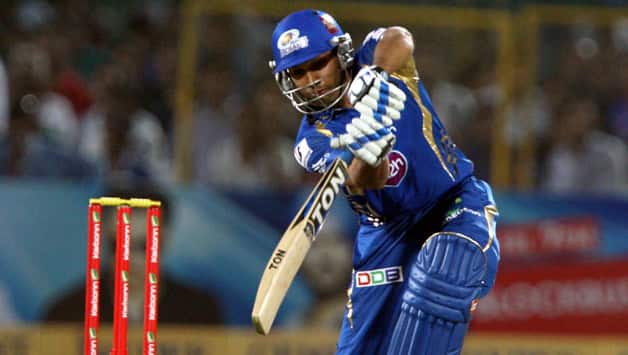 The Champions League Twenty20 (CLT20) 2013 began with the Rajasthan Royals getting off to an imposing seven-wicket win over the Mumbai Indians on Saturday in Jaipur. Vikramjeet Malik and Sanju Samson were the star performers for the Royals, while Rohit Sharma and Kieron Pollard shone for Mumbai. Shrikant Shankar analyses the performances of all the players from the match.

The group stages of the Champions League Twenty20 (CLT20) 2013 kick-started with an all Indian Premier League (IPL) encounter as the Rajasthan Royals comprehensively beat the Mumbai Indians by seven wickets in a Group A match at the Sawai Mansingh Stadium on September 21, 2013. All the pre-match focus was on Rahul Dravid and Sachin Tendulkar possibly playing for the very last time in the same match. But as things turned out, both the legends had quiet games. But there were others, who had some really good games. Let’s take a look at each player’s report card.

Mumbai Indians (According to batting order)

The West Indies all-rounder was one of the non-performers of the match. Dwayne Smith scored nine from seven balls and gave away 12 runs in his only over. There will surely be some top-order pyro techniques from Smith later in the tournament.

Sachin Tendulkar tried to play the sheet anchor role for the Mumbai Indians, but it lasted only 17 balls as he could only muster 15 runs with three fours. Stuart Binny got the ball to swing away slightly off a good length and Tendulkar edged it to Sanju Samson behind the wickets.

Dinesh Karthik had a really poor match, well at least with the bat. He faced 11 balls, but scored only two runs. He struggled with the movement off the pitch and was eventually bowled by Vikramjeet Malik.

The captain had a good match with the bat, but was not enough for the win. Rohit Sharma scored a 37-ball 44 as he guided Mumbai along with Kieron Pollard in the middle overs. It was not easy batting out there as the bowlers had their tails up. Rohit struck three fours and two sixes.

Ambati Rayudu was also another who had a match to forget. He scored a run-a-ball three before being run out by Ajinkya Rahane.

Kieron Pollard came in with the scores reading 43 for four. He put together two important partnerships in the middle overs. First a 52-run stand with Rohit for the fifth wicket and then added 35 runs with Harbhajan Singh for the sixth wicket. The West Indies all-rounder scored 42 runs off 36 balls. He struck four fours and two sixes. His knock and the partnership helped Mumbai reach a modest total of 142 for seven in 20 overs. He also dismissed Sanju Samson during Rajasthan’s innings.

The Indian off-spinner first scored eight runs off four balls and then went wicket-less in his three overs. There will be better times ahead for Harbhajan Singh in the tournament.

Nathan Coulter-Nile was in the team due to Lasith Malinga’s absence. But he proved his worth with some impressive bowling. He dismissed Rahul Dravid in his first over and contained the Rajasthan batsmen as much as he could he finished with figures of 3.4-0-22-1. Earlier, he smashed a four and a six to score an unbeaten five-ball 12 to propel Mumbai’s innings in the last over.

Mitchell Johnson bowled at speeds that made him the best a few years ago, but with a small target in sight he was unable to do much with the ball. The left-arm fast bowler should have had Samson early on plumb leg-before, but the umpire had a shocker and said not out. Rajasthan could have been two wickets down quickly, but luck was just not with Mumbai on the day. Johnson went on to concede 38 runs in his four overs.

This was one of Pragyan Ojha’s poorest matches. The slow left-arm bowler was struck for 13 runs in his only over and he lost his captain’s faith after that. Rajasthan Royals (According to batting order)

Rahul Dravid was dismissed for only one run off four balls. He slapped a short ball from Coulter-Nile to Pollard at point. But he can take a lot of satisfaction as his dismissal did not deter Rajasthan’s chase.

In the context of things, Ajinkya Rahane did well for his 31-ball 33. Along with Samson, he added a 74-run stand for the second wicket, which effectively took the game completely away from the 2013 IPL champions.

Samson was the best batsman on the day. He scored a 47-ball 54 as he helped Rajasthan to a comfortable win. He struck eight fours in his knock. Samson was very lucky to survive a leg-before appeal from Johnson as mentioned above. But he used that luck to good effect on Saturday. He also caught three catches behind the wicket.

Shane Watson is getting back to the form that made him one of the best all-rounders in the game. With the ball, he got rid of Rohit when the latter looked well set for a big score. Then he controlled the Rajasthan innings with the bat as he remained unbeaten on 27 off 22 balls to see his side through.

Stuart Binny had a game to remember. First he got Tendulkar’s wicket and then came into the middle and smacked the ball cleanly. His 14-ball 27 included three fours and one six. That six over long-on proved to be the winning runs.

There is not much Brad Hodge did in the match that affected the game in any way. On the field, he did not bowl or take a catch or affect any run out. He was also not required with the bat. Hence, is ratings for the match are not applicable.

The left-arm slow bowler bowled only two overs, but was miserly. He gave away only nine runs.

The West Indies seamer was very expensive on a low-scoring match. He came in for some punishment as Pollard targeted him. Kevon Cooper conceded 31 runs in three overs and went wicket-less.

Rajasthan relied a lot on James Faulkner during IPL 2013. But on Saturday he was ineffective. He gave away 31 runs in four overs.

It was the damage done by Malik early on that put Mumbai on the backfoot. He dismissed Smith and Karthik early in the innings and then later returned to pocket the important wicket of Pollard. He was also involved in Harbhajan’s run-out. Definitely the Man of the Match.

Rajiv Shukla bowled only two overs, but conceded only six runs. There was not much else he did in the match.