KXIP were favourites to beat CSK after enjoying an undefeated run in the group stage.

It was a unusual day in Hyderabad when the ‘red army’ led by George Bailey crumbled in the all important 20-over match. All the hard work, the momentum which was build by praiseworthy performances in Mohali saw an ugly end. Varun Arora finds what went wrong for Kings XI Punjab.

Chennai Super Kings ( CSK) had only 10 points from four matches .They relied on Lahore Lions to enter the semi-finals of the Champions League T20 (CLT20) 2014. As Lions faltered, CSK gasped in relief. On the other hand, Kings XI Punjab (KXIP) won all their matches, collected 16 points and looked forward to the CLT20 final.

Fate wanted a semifinal date between the team which was oozing with confidence and a side which looked jittery. The result which transpired from Rajiv Gandhi International Stadium, Hyderabad was not in tune of what was expected, given the performance of two teams in the tournament: KXIP were bowled out for 117. The team which boasted of superior batting abilities had choked chasing 183.

KXIP had failed to even play the full quota of overs. They were was already shaking hands with their rivals after crashing out of the CLT20 ten balls before the stipulated 20 overs. Anureet Singh and Karanveer Singh added 27 runs for the last wicket to give some respect to the KXIP fight.

KXIP had got the two stalwarts — Dwayne Smith and Brendon McCullum — out early but failed to take any advantage. Parvinder Awana picked up a hat-trick; Anureet Swing bowled beautifully; but the misery started after Glenn Maxwell put down Dwayne Bravo when he was on a mere eight.

Soon after, KXIP bowling became wayward as Darren Bravo imploded, racing to a 39-ball 67. Ravindra Jadeja supported him with a 13-ball 27 and CSK reached a total which was competitive against a side known for its batting.

With a target of  183, KXIP probably backed themselves to win this one and play Kolkata Knight Riders (KKR) in the finals. It would have been easy if the openers had clicked, but Virender Sehwag came and left. Wriddhiman Saha had a few slogs and departed. Glenn Maxwell went back after a couple of minutes.

KXIP were drowning in response to the big total posted by CSK. Manan Vohra, one of the highest run-getter in CLT20 also departed in the same old fashion as he tried to hit too hard. However, hopes were still alive In the form of David Miller and George Bailey.

But it was a different day when even Bailey — the man who always led the KXIP in tense situations — played an unnecessary stroke and followed Vohra’s footsteps. The eagerness brewed with intense pressure drowned KXIP. The big bashers and flamboyant players were also sitting in the dug-out with sore eyes and straight faces. The self-proclaimed batting all-rounder gathered some runs before the team from Mohali had fizzled out in front of a lively Hyderabad crowd.

It was a day when there were no sixes from MS Dhoni, no classy Suresh Raina shots and no Miller-Maxwell show. At the end, however, CSK are en-route Bengaluru to play KKR, who have been depleted by the loss of Sunil Narine due to a suspect action. The team which arrived in the semifinals with bouts of anxiety was now full of poise and assurance to win CLT20 2014. 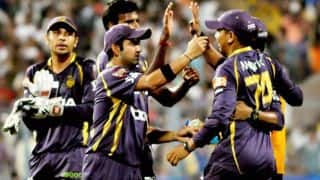