KKR will bank on the spin wizard Sunil Narine to deliver the goods yet again.

With the competition hotting up, an epic battle between Kolkata Knight Riders and Lahore Lions is on the cards. R Vishal tries to decode five key battles in the encounter.

Undoubteldly, Kolkata Knight Riders (KKR) have a clear edge in terms of the balance of the squads with a brilliant all-round squad and have world class performers in all departments. The Lahore Lions (LL) outfit are not lagging behind by too much either.

In skipper Mohammad Hafeez, their stylish international opener Ahmed Shehzad and the mercurial Umar Akmal comprise a solid batting line-up for T20’s. Kolkata, bat deep and their IPL star man Robin Uthappa will be the key up the order. While they had a brilliant finisher in Yusuf Pathan, Andre Russell’s recent displays after being in the fringes for a while, highlights the strength in depth in the KKR ranks.

We have witnessed in sport how this type of a contest contest can sometimes turn out. An unhearalded visiting team trumping over a heavily favoured home side. Aizaz Cheema has been amongst the wickets in this tournament and with Cheema and the canny left-armer Wahab Riaz, Lahore can hurt KKR. The Indian side, meanwhile will bank on the spin wizard Sunil Narine to deliver the goods yet again. The supporting cast of bowlers around Narine are rarely given their credit with the West Indian walking away with the plaudits ever since he became a prominent feature of the side.

Gautam Gambhir vs Wahab Riaz: The Kolkata Knights Riders (KKR) skipper could not buy a run in the early exchanges of Indian Premier League (IPL) 2014. The Pakistan left-armer meanwhile is in a fight to be the top dog of the pace attack for his country, ahead of Junaid Khan. Wahab relies on swing quite a bit and can produce the delivery the shapes away from the left hander; a ball that soutpaws hate in general. This will be key feature in this battle and Gambhir has a lot to prove after a miserable comeback into the Indian set-up in England recently.

Mohammad Hafeez/Umar Akmal vs Sunil Narine: If Mohammad Hafeez were to be a regular feature in the Indian Premier League (IPL), one can only imagine the bidding war that would ensue in the auctions to grab the former Pakistan T20 captain. If Hafeez gets going, there are few who can put the brakes on him scoring. Enter KKR’s trump card Sunil Narine. There is every chance that Gambhir will bring the off-spinner early to negate Hafeez’s threat. With the batsman being a good player of spin, a tantalising battle is on the cards. Umar Akmal would be in a better position to handle Narine with his flair and his natural instinct to attack the bowler ‘s length. Narine vs Akmal should be one of the highlights of the game.

Aizaz Cheema vs Robin Uthappa: The Karnataka opener was in the form of his life in the 2013-14 season and Aizaz Cheema is in fine form coming into this fixture. It remains to be seen how much Cheema can move the ball around in the batting friendly wickets of Hyderabad but Uthappa looks like a front-runner to win this battle with his crisp technique and his ability to find gaps at will.

Ahmed Shehzad vs Umesh Yadav: The dashing Pakistan opener is someone who like setting the tempo. Umesh Yadav will be steaming in with pace and can err in line and if it happens in this tie, Shehzad will make him pay. Yadav will have his task cut out but the Vidharbha pacer has steadily ironed out his shortcomings in the recent past. Its even-stevens here.

Adnan Rasool vs Andre Russell: In the recently concuded Caribbean Premier League (CPL) and KKR’s previous encounter, Andre Russell proved that he is one of the biggest strikers of the cricket ball going around. Lahore Lions, meanwhile do not have a big armoury of back up bowlers. 33 year –old Adnan Rasool is a tidy customer and is stingy with runs. How will the power of Russell match up to the wily Rasool is surely a batttle to watch out for. 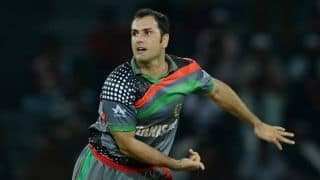 Shahid Afridi to quit other formats to focus on T20s