The Champions League Twenty20 (CLT20) 2013 match between Highveld Lions and Otago Volts ended in a tie on Sunday. This was the fourth ever tie in the history of the competition. Sarang Bhalerao takes a look at all the tied matches to have occurred in the CLT20. Highveld Lions’ Quinton de Kock was in spotlight throughout the thrilling match against Otago Volts. Having scored a sparkling ton batting first, de Kock conceded a bye on the last ball of the Otago innings which resulted in a tie © IANS

The Champions League Twenty20 (CLT20) 2013 match between Highveld Lions and Otago Volts ended in a tie on Sunday. This was the fourth ever tie in the history of the competition. Sarang Bhalerao takes a look at all the tied matches to have occurred in the CLT20.
Eagles vs Sussex: Champions League 2009, Delhi

Sussex batted first and scored 119 for seven in their 20 overs. Sussex batsmen struggled against the low bounce at the Feroz Shah Kotla track. Joe Gatting, nephew of Mike, top-scored with 25 off 22 deliveries.

Eagles were coasting along in their run-chase as the opening partnership of Rilee Rossouw and Adrian McLaren added 72 in 11 overs. Panic struck as Eagles lost wickets in a heap. Piyush Chawla picked up two for 17 in his four overs and Rory Hamilton-Brown bowled three overs and picked up two wickets conceding only 15 runs.

Needing 12 from the final over, Ryan McLaren hit two boundaries off Yasir Arafat and the match ended in a tie.

Sussex entrusted Arafat the responsibility of bowling the Super Over. He conceded nine runs in the over.

Cornelius de Villiers bowled Dwayne Smith off the first delivery and then beat Hamilton-Brown with his pace cleaning him up as well. The Super Over lasted for only eight deliveries  — shortest in the history of CLT20.
Chennai Super Kings vs Victoria Bushrangers, Champions League 2010, Port Elizabeth

Batting first, Chennai scored 162 for six courtesy of a fine 73 from opener Murali Vijay. The Australian outfit looked comfortable chasing down the runs. Victoria needed 24 off the final 18 deliveries. MS Dhoni gave the ball to Suresh Raina and he picked up four wickets in the 18th and the 20th over.

In the 19th over, Victoria lost David Hussey for 51 and it was difficult to determine who the winner would be till the last ball. Chennai managed to hold their nerve and prevented Victoria from winning the game in the regulation 20 overs.

Dhoni went for Ravichandran Ashwin for the Super Over instead of Australian recruit Doug Bollinger. David Hussey relished the challenge of facing Ashwin as he carted the second delivery over long-on for a huge six. The fifth ball was a full-toss, which was hit straight for a six and the sixth ball was a length delivery, which sailed over mid-wicket for the third six in the over.

Needing 24 runs to win, Chennai could manage only 13 off Clint McKay’s over thus losing out in the Super Over.
New South Wales vs Trinidad and Tobago, Champions League 2011, Chennai

Batting first Trinidad and Tobago scored 139 for six in the 20 overs. Lendl Simmons (41 off 39 deliveries) top-scored for Trinidad.

New South Wales struggled against the Trinidad spinners. Sunil Narine (two for 26) and Sherwin Ganga (three for 26) pegged New South Wales back considerably. In the end, Moises Henriques’s cameo in the final over off Ravi Rampaul ensured that the match ended in a tie.

New South Wales batted first in the Super Over. Rampaul was entrusted with the responsibility of bowling the over. Bowling round the wicket, Rampaul tried to bowl yorkers. He missed his line on the third delivery, which was a full-toss. The ball was hit for a boundary towards mid-wicket by Henriques. The fourth ball was hit through covers for a boundary. The fifth ball was a length delivery, which was hit over mid-on for another boundary. The final ball was worked away towards square-leg for the fourth consecutive boundary of the over. Eighteen runs were scored in the Super Over.

Steve O’Keefe, the left-arm spinner, bowled the Super Over for the New South Wales Blues. He was hit for a six over long-on and a boundary towards square-leg. It all came down to four off one delivery. Simmons failed to connect the final delivery  — a length ball. It was caught at long-off by David Warner.
Highveld Lions vs Otago Volts, Champions League 2013, Jaipur

Quinton de Kock’s 109 powered Highveld Lions to 167 for four against Otago Volts. The New Zealand outfit were struggling with the run-chase until Jimmy Neesham came to the party and smashed an unbeaten 52 off 25 deliveries. Needing 11 to win off the final over, Neesham began the proceedings with a six over long-on off Sohail Tanvir. The Lions’ specialist death bowler then pulled things back and brought the equation down to two off one ball. Neesham sneaked in a bye as Neil Wagner failed to connect the ball.

Tanvir bowled the Super Over and he conceded a boundary off the first ball. Neesham smashed a slower ball from Tanvir through the covers for a boundary. Tanvir then conceded only three runs from the next four balls. Brendon McCullum gave Tanvir the charge on the final ball and carted him over long-off for a six.

Lions began the run-chase in a positive fashion as De Kock hit Neesham for a four and a six to bring the equation down to four runs off four deliveries. He got a single off the third ball. Jean Symes attempted a needless big hit, which was caught at long-off. The centurion of the match, De Kock got a single off the penultimate ball bringing the equation down to two off the final ball. Neesham bowled a low full-toss to Dwaine Pretorious, which was hit towards long-on. Lions could get only a single off that delivery.

This is the only instance where a Super Over finished in a tie. Otago won the game because they had hit one more boundary than Lions. 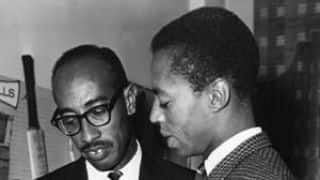 Lance Gibbs: The most successful off-spinner in Test cricket till Muttiah Muralitharan