Colin Cowdrey, born on December 24, 1934, is one of the greatest cricketers to have played the game.

Colin Cowdrey, born on December 24, 1934, is one of the greatest cricketers to have played the game. He was the first man to play 100 Tests and was the leading run-scorer until Sir Garry Sobers overtook him. A respected cricketing figure, Cowdrey was a statesman in his later years.

1. Born in India: Cowdrey’s recorded birthplace is Bangalore. However, in his autobiography, MCC, The Autobiography of a Cricketer, Cowdrey writes, “Actually, it was a hundred miles to the north and several thousand feet higher up in the Nilgiri Hills.” In reality, Nilgiri Hills is to the south of Bangalore.

2. M.C.C: Upon his birth, Cowdrey’s father immediately had him enrolled as a member of the Marylebone Cricket Club (MCC). The legend goes that he was named Michael Colin Cowdrey by his father so that his initials match the famous club’s famous initials. But, Cowdrey is not entirely sure. “A number of journalists are convinced he did it deliberately. Strangely, I never once discussed with him,” Cowdrey wrote.

3. The first hundred that wasn’t: Cowdrey was playing for his school Homefield in an under-11 match at the age of seven in the year 1940. He writes that it was his first proper match and that he got signals that he was on 93. He scored another seven runs to reach his hundred and then gave his wicket away. However, he was in for a shock when he returned as the scorer told him that his score was 93 and not 100!

4. Jack Hobbs’ letter: Despite missing out on a century, the young Cowdrey got a gift any young cricketer would have envied then. The legendary Jack Hobbs presented him with an autographed bat and a letter in which he wrote, “I shall follow your career with great interest.”

5. Sporting family: Cowdrey’s father Ernest dreamt of being a cricketer, but had to give it up at a young age. He was then posted in India, taking care of a tea plantation. He represented Europeans against the MCC in 1926-27, when Arthur Gilligan’s side had come around. Colin Cowdrey’s mother, Molly, used to play hockey and tennis.

6. Sports other than cricket: Cowdrey also excelled in squash and rugby at a very young age. He also captained the Colts Rugby team.

7. Compliments from Denis Compton: When Cowdrey was young, he played for the Denis Compton XI in a benefit game. Cowdrey shared a 120-run partnership with Compton, who was so impressed by the youngster’s cover drives that he told him, “One day you must teach me that shot.”

8. Losing his father on his first tour: In his autobiography, Cowdrey speaks of his relationship with his father, who had initiated him into cricket. The father fell ill and died when Cowdrey left for his first Ashes tour in 1954-55.

9. Uncompleted service: As a young man, Cowdrey wanted to finish his two years of national service. He was at the Royal Air Force (RAF) base in Bedfordshire soon after returning from his maiden voyage. However, the doctors diagnosed a problem with his toe joints and he could not finish his service.

10. Cricketers at the wedding: Cowdrey married Penelope Chiesman in 1956. His best man for the wedding was teammate Peter May. Reverand David Sheppard, another England cricketer, helped out at the service. 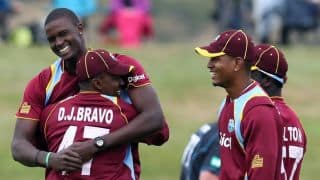 Phillip Hughes' passing at the back of my mind every time I play: David Warner