Collie Smith: A tale of joy, brilliance and tragedy

Collie Smith: A tale of joy, brilliance and tragedy

Collie Smith, born May 3, 1933, was an exciting all-round talent who was killed in a car accident at the tender age of 26. Arunabha Sengupta looks back at the life and career of the man whose brilliance, according to some, had the glitter and sparkle to match Garfield Sobers. Collie Smith acknowledges his century in the second innings against England in the Third Test at Trent Bridge in 1957. Smith went on to score 168 © Getty Images

Collie Smith, born May 5, 1933, was an exciting all-round talent who was killed in a car accident at the tender age of 26. Arunabha Sengupta looks back at the life and career of the man whose brilliance, according to some, had the glitter and sparkle to match Garfield Sobers.
The tragedy

September 6, 1959. There should have been four of them, but when Roy Gilchrist did not turn up, the others decided to start without him. Fickle finger or fate, Garry Sobers says in his autobiography. If Gilchrist had turned up on time or if they had waited a bit longer, the tragedy might have not taken place.

That summer, Sobers was playing for Radcliffe in the Lancashire League. Collie Smith had been turning out for Burnley. Three months earlier he had slammed an amazing triple hundred for them against Lowerhouse. Medium-fast bowler Tom Dewdney was running in for Darwen. The three met at Manchester, at the house of a Bajan fan. After a jovial dinner, and some fruitless hours waiting for Gilchrist, the three cricketers set out to drive south to London where they were supposed to play a charity game on Sunday.

Smith was the one who took the wheels of Sobers’s Ford Perfect, and handed it to Dewdney after a while. And in the wee hours, it was the turn of Sobers. Dewdney moved to the passenger seat and Smith went to sleep in the back. The car was speeding along A34 near Stone in Straffordshire. At 4.45 am, as they approached the Darlaston Bend, two dazzling headlights blinded Sobers.

Much later they learnt that they had collided with a 10-ton cattle truck. Sobers regained consciousness after a short while, heard Dewdney making a lot of noise and saw Smith lying on the ground. “How are you little man?” he asked his friend. Smith answered straightaway, “I’m all right, maan — go look at the big boy.”
An ambulance arrived and took the three to the hospital. Dewdney, with facial cuts and some lost teeth, remained unconscious for a while. Sobers had a dislocated bone in his wrist, a cut eye and a severed nerve in a finger. For all his nonchalance of the moment, it was Smith who had been hit the worst — with damage to his spinal cord.

Three days after the crash, a priest walked into the hospital room in which both Sobers and Dewdney were lying, and started talking about the whims of fate, life, uncertainties and tragedies. And finally he revealed the news that Collie Smith was dead.

The cricket world was shocked. O’Neill Gordon ‘Collie’ Smith was the favourite son of Jamaica, and had kindled the imagination of the cricket loving island. At 26, he was just maturing into a genuinely great all-rounder. With the supreme gifts of Sobers alongside him, Smith could have propelled the West Indian team into an unprecedented powerhouse of all-round strength. Instead 60,000 mourners turned up in disbelief and dismay at his cruelly premature funeral in Kingston.

It was not only that Smith batted with aggressive fluency and bowled inspired spells of off-spin. There was much more to the man. His infectious enthusiasm and huge grin made it apparent that he was enjoying his cricket enormously, and it made him a joy to watch. His natural inclination was to belt every ball, but he had learnt to curb his instincts to attack with some semblance of restraint. He had the knack of picking up valuable wickets with his off-breaks. And he had the ability to lift the spirit of the entire side with his magnificent fielding.

Very few knew him as anything but ‘Collie’. His parents used to call him by the pet name Carl, but it created confusion when as a four-year-old he befriended a constant playmate by the same name. This led Smith’s grandmother to change the Carl to Carlie. From there it was but an affectionate transliteration that gave rise to Collie.

Smith started playing cricket at the age of seven, with much bigger boys, in street games with cloth balls, and often paid for it with a generous amount of spanking. At his school St. Albans, he made the team when he was nine, playing alongside boys who were mostly 15. And within three years, he was captaining the side. Following the ambitions of most Jamaican youngsters that day, his game was simple. He used to bowl as fast as possible and hit the ball as hard as he could.

It was at the age of 15, when he used to play for a Kingston Club called Boys’ Town, that Smith watched his first First-Class game. It was a match between the visiting Marylebone Cricket Club (MCC) and the Jamaicans. He was so impressed by Jim Laker that he gave up fast bowling and turned to off-spin. Soon, teammates in Boys’ Town started calling him Jim.

In all his formative years, Smith received a day’s coaching from Jack Mercer, the former Glamorgan bowler. There was some guidance from Major Knibbs, an umpire of some repute. Apart from this, Smith was self-taught. Perhaps all those who rejoiced in his unrestrained natural talent should be thankful for the untampered style that was allowed to flourish.

It was not until 1955 that Smith made his First-Class debut, but by then he had already experienced top level of cricket.  His brilliance in the field prompted Jamaica to use him as twelfth man. And later, he was drafted as an emergency substitute fielder in Test matches — in 1953 against India, and the following year against England.

His third First-Class game was against the visiting Australians. Smith bowled 44 overs, taking four wickets including the prize scalps of left-handers Arthur Morris and Neil Harvey. Australia piled up 453, and Smith walked out with Jamaica struggling at 69 for four. It was soon 81 for five against Ray Lindwall, Keith Miller, Bill Johnston, Ian Johnson, Richie Benaud and Alan Davidson – perhaps the strongest bowling attack ever seen on the ground. With wicketkeeper Alfred Binns, Smith added 277 for the sixth wicket, notching up a career-best 169.

As a result, the next First-Class match he played was for West Indies. It was the first Test at Sabina Park against the same Australians. The visitors put up 515 on the board and had the home team struggling at 101 for five when the youngster made his way to the wicket. Smith scored 44 and added 138 with the great Clyde Walcott. When West Indies followed on, trailing by 256, Smith was sent in at the fall of the first wicket and hammered 104 against Lindwall, Miller, Ron Archer, Benaud and Johnston.

But, the good times did not last. Soon, Smith experienced the harsh world of Test cricket. He bagged a pair in the second Test at Port-of-Spain and did precious little in the remaining matches. However, he remained cheerful and the wide grin remained etched on his face. When West Indies toured New Zealand, he cemented his place in the side by scoring 64 at Dunedin and taking a five wicket haul at Christchurch.

By this time, Smith had come to realise that Test match cricket was more than brute force. Keith Miller’s controlled swing had troubled him. A period of retrospection during the New Zealand tour helped him snip off the more dangerous hits from his game. So, when the West Indies side travelled to England in 1957, Smith was a more than a raw talent. He had also been touched by wisdom.

The results were immediately apparent. With Frank Worrell, Clyde Walcott and Everton Weekes in the side, no one expected the young man to hog the limelight with the bat. But, Smith did exactly that.

He hit 19 fours and a six in his 161 at Edgbaston, becoming the first person to hit centuries against both Australia and England in his first appearances against these old cricketing nations. At Trent Bridge, he arrived at the wicket with his team in crisis, 56 for four after following on with more than a day and a half remaining. Smith saved the match by batting seven hours to score 168, his highest score in Tests. And although his primary policy was occupation of the crease, he did take time out to loft three sixes. He finished the series with more runs than the three Ws and was named as one of the Cricketers of the Year by Wisden. He put in consistent performances for the next couple of years, with one fantastic Test in Delhi with a century and figures of three for 94 and five for 90. His last series, in Pakistan, was not spectacular, but his sense of fun along with his religious bent of mind was a steady influence on the team.

Called ‘Wayside Preacher’ by the team, he liked to read a lesson in the church. With his fast maturing wisdom, he helped Sobers deal with some dreadful decisions he was getting from the umpires on the Pakistan tour.

A teetotaller himself, Smith carried bottles of Jamaican rum to use as ointment on sore muscles. Hence, his room was a popular place for his teammates and Jamaican friends who treated themselves to hearty swigs.

The shadow on Sobers

With the three Ws in the evenings of their great careers, Smith was integral to the West Indian vision of the sixties. Especially with his excellent record against England, he was expected to be one of the key players when Peter May’s team would visit in the 1959-60 season. And suddenly it all ended on that highway in Staffordshire. The life of this vibrant cricketer was snuffed out in its very prime.

Smith’s final figures show 1331 runs at 31.69 and 48 wickets at 33.85 in 26 Tests. Popular belief remains that they were bound to improve with time. If fate had not snatched him from our midst and he had played for another decade, one wonders what he could have achieved. Smith had shown only glimpses of his enormous potential.

Some claimed he was as great a talent as Sobers. The tragic untimely death may have led to tribute tinged with tendency to exaggerate, spilling into the panegyric. But the very fact that such comparison could be attempted underlines what might have been.

Sobers himself, a close friend and roommate on tours to England and Pakistan, was mortified — not least because he had been the one driving the car when the fatal collision took place. He later wrote in the prologue to his autobiography that for a while the events of that night dominated his thoughts and cricket remained a distant second.

When the shock and sorrow subsided, Sobers played against England in the first Test of the 1959-60 series at Bridgetown. He batted 10 hours and 47 minutes to score 226 before being bowled by Fred Trueman. According to the great all-rounder, he had realised that from then on he would have to do the job of both Garry Sobers and Collie Smith.

Gautam Gambhir and Cheteshwar Pujara should have been selected for Champions Trophy: Dilip Vengsarkar 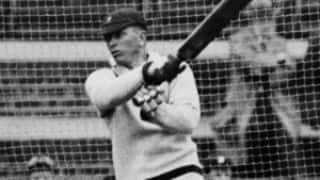